Japan’s rapid industrialization during the Meiji Period (1868-1912), when the country was re-opened to international trade after more than 250 years of isolation, was nothing short of remarkable.  The various achievements of the period were recognized by UNESCO in 2015 when it listed 23 components at 11 sites as “Sites of Japan’s Meiji Industrial Revolution: Iron and Steel, Shipbuilding and Coal Mining”.

While most of the locations included in this world heritage listing are located in southwestern Japan, there is one that can be visited as a day trip or week-end away from Tokyo:  the Nirayama Reverbatory Furnaces (Nirayama Hansharo) on the Izu Penninsula. （JPY300) 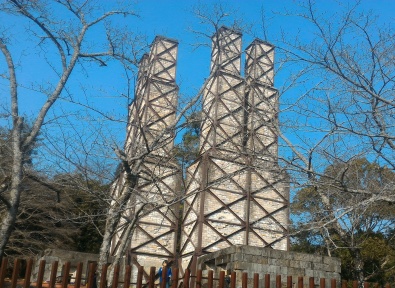 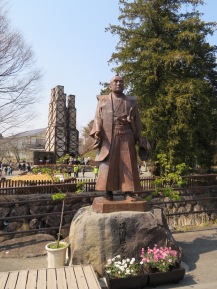 While this is a small site, there is much to recommend it, including the chance to learn about the vision of Egawa Hidetatsu–the local governor who first conceived the idea of the furnaces–, the ultimate construction and use of the furnaces, and their early preservation once they were no longer needed.

The first point of interest is the fact that the furnaces were constructed over a three year period (1854-1857) before the Meiji restoration even began.  We have Commodore Matthew Perry and his so-called Black Ships to thank for that. 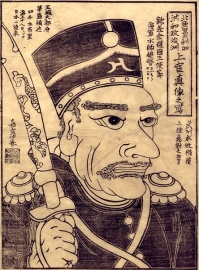 Perry first sailed to Japan in 1853 to demand that Japan open itself to trade, at least to the extent of providing provisions to American vessels sailing in the area.  He made his demand and left for six months to give the Japanese time to consider the matter, returning in 1854 to conclude the Convention of Kanagawa, the first step toward US-Japan diplomatic relations.

Perry’s visits caused quite a stir in Japan, where the power and influence of the ruling Tokugawa shogunate was already on the wane, while news of the colonization efforts and influence of European powers across Asia only caused further insecurity.  The need for the Japanese nation to show strength was quickly recognized and various efforts launched to protect the tiny island nation.

Among these efforts was the creation of some defensive positions to stave off any American/Western attempts at aggression.  To protect Tokyo (then known as Edo), several small islands were constructed in Tokyo Bay near the mouth of the Sumida River.  Some of these islands still exist in the Odaiba area.  Of course, for an effective defense, these islands needed to be fortified and armed.  Japan needed to be able to produce cannon.

And this is where Egawa’s vision to construct reverbatory furnaces at Nirayama comes in. The location was important–on Izu but far enough from Shimoda and the area where the Americans had landing rights to ensure that they would not find it.  The site also needed a good water supply, as once the cannon were cast, waterwheel power would be needed to properly bore them.

A reverbatory furnace is one that bounces heat off the domed ceiling of the furnace in order to amplify it for the purposes of melting metal for casting.  It was a common European technology of the 17th-18th centuries, known in Japan at that time only from Dutch writings.  It took 3 years of trial and error to finally get the smelting process right and begin casting big guns.

Atop the furnaces sit four brick chimneys, each about 15.7 meters tall.  These chimneys are the most striking remnant at Nirayama, although the various components of the furnaces can still be seen around the base of the chimneys and there are signboards explaining how they worked.  While the signboards are currently only in Japanese, free English guides are often available. 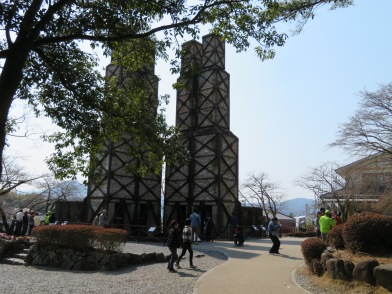 The furnaces only operated for 7 years, from 1857 to 1864. Interestingly, when they went out of use, locals insisted on preserving them, even going so far as to encase the fragile brick chimneys in frames to prevent them from being toppled by seismic activity.  The diamond patterns on the chimneys today are the result of the steel reinforcing frame that currently holds the chimneys in place.  Due to the simplistic structure of reverbatory furnaces, when the technology was superseded, most furnaces were destroyed. Nirayama is one of only two reverbatory furnace sites extant in Japan (the other, also part of the same World Heritage listing, is in Hagi).  Most such furnaces in Europe have also long since been destroyed. 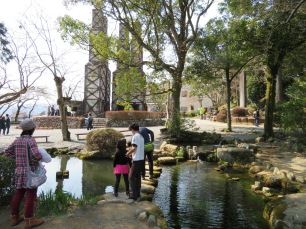 The waterwheels and outbuildings that supported the furnace no longer exist, although the spring and the small river that powered the waterwheels are still there.  A small but excellent museum/visitor center just opened next to the furnaces last year.  The introductory film, although only in Japanese, enables visitors to visualize the operation of the furnaces.

There is a viewing platform partway up a hill of tea bushes nearby.  It’s just a short climb and highly recommended to give a perspective on the chimneys and their place in the valley (even if the valley in fact dwarfs the chimneys).  If the weather is clear, Mt. Fuji is also visible from here (alas, not on the day I visited).

The obligatory souvenir shop is noteworthy because it is housed in a large building that is also a microbrewery–producing “Hansharo Beer”–and a restaurant operated by the microbrewery.  If you’re not driving, consider complementing your yaki-niku lunch with their tasting set–four tasting glasses for JPY900.  Free wifi, too! 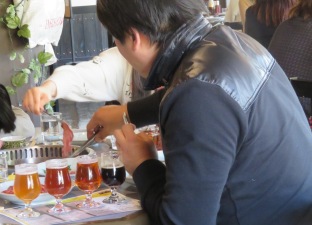 Ten minutes up the road you can also visit Egawa-tei, the home of Egawa Hidetatsu.  Hidetatsu was the 36th Egawa to serve as local governor of this area.  The house is more than 400 years old and contains various Egawa and regional memorabilia.  Volunteer docents are happy to explain the history and construction of the house as well as its work as an administrative center.  (JPY500) 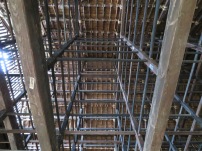 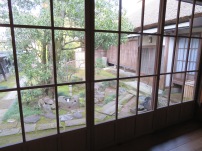 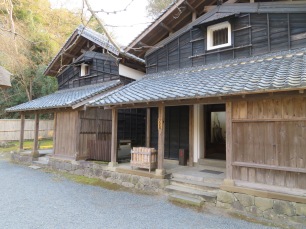 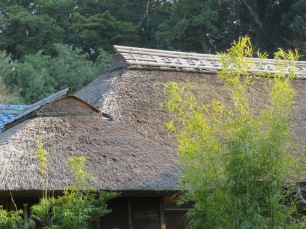 It turns out Hidetatsu’s forward thinking tendencies were not confined to furnace construction.  He was also involved in significant local education efforts as well as building Japan’s first oven and making Japan’s first bread–something akin to hard tack.  April 12, the date on which his ovens first produced bread, is still celebrated as “Bread Day” in Japan. 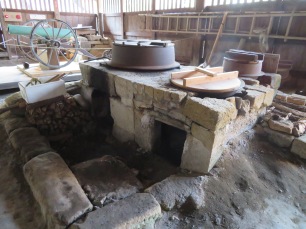 Not far from Egawa-tei are several greenhouses of strawberries that allow self-picking from January to May.

The nearest train station is Izu-Nagaoka, on the Izu-Hakone train line which runs between Mishima and Shuzenji.  To walk from the station to the furnaces takes about 30 minutes.  Taxi service is available, but I recommend renting a bicycle (JPY500/day) to give you maximum flexibility to explore the area. Izunokuni Bus Co. also operates an hourly shuttle bus (JPY100) that runs in a loop from Izu-Nagaoka station to the furnace, Egawa’s house, the strawberry fields and other sites of interest in the area.

One thought on “Exploring early industrialization in Izu”