Iwate Prefecture in Japan’s Tohoku (northeast) region is a beautiful and diverse area with much to recommend it to the intrepid tourist. Not long ago we were travelling  the countryside between Hiraizumi in the interior and Ofunato, one of Iwate’s coastal cities hard-hit by the 2011 earthquake/tsunami disaster, and decided to make a stop at Geibikei Gorge.

The narrow gorge, flanked by steep cliffs, is formed by the Satetsu River. Traditional wooden boats offer 90 minute tours through the gorge.

We were unlucky with our timing–a boat had just pulled away from the dock when we arrived and the next departure wasn’t until it returned in 90 minutes. But the lady at the ticket window helpfully asked if we were driving and suggested we could visit nearby Yugendo cave and get back in time for the next boat. So we did.

It took about 5 minutes to reach the cave, which was just 2 kilometers away.

Yugendo is definitely off the beaten track, at least for foreign visitors. A limestone cave discovered only in 1980, unlike many of Japan’s more famous caves, Yugendo is long and narrow, almost like a tunnel.  Visitors enter from one mouth and exit from another (admission JPY1,000). At the same time, exploring it requires both vertical and horizontal movement. Accordingly, in places stairs and ladders have been added to make it easier for visitors to pass through.

The fossils contained in the rock indicate that the cave is around 350 million years old and that it was once undersea. Over the millenia, water seeping through the stone into the cave has also caused stalactites, stalagmites and other weird formations.  (It was on my visit here that I learned the Japanese word for stagmite, literally “stone bamboo shoots”. Makes sense, right?)

At a couple of spots, small shrines had been erected inside the cave, either because the rock formations were reminiscent of images of gods, or simply to invoke the guardianship of the gods. The lights and atmosphere of these little shrines were somehow warm and comforting in the otherwise cool damp of the cave. 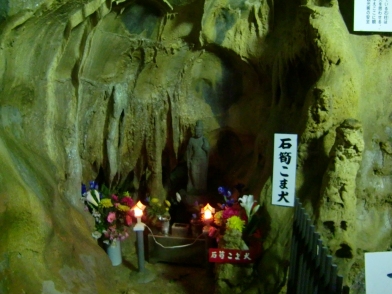 Once through the cave we took a little time to wander through the small museum near the cave’s entrance, which contained displays about the geology and fossils of the cave (unfortunately, mostly in Japanese).

We got back to Geibikei with about 10 minutes to spare, freshened up and hopped in our boat with a dozen other passengers.

As the boatman poled us upriver, he explained a bit about the geology of this area and how the gorge was formed, as well as pointing out particular plants and wildlife. Although we were a month too early for autumn leaves, it was easy to see how this place is attractive in different ways in the different seasons of the year. 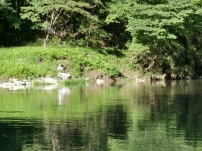 Because we were heading upriver, the gorge rose and got narrower as we proceeded. 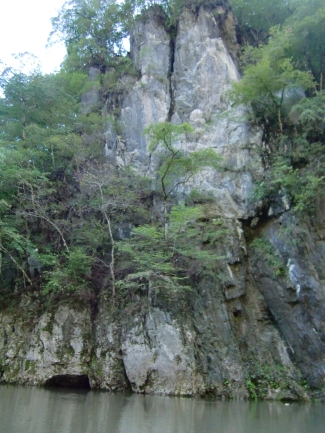 After about 45 minutes, we reached the turning around point, a sharp bend in the river, where we stopped for a little break.  The outer wall of the riverbend was a sheer cliff. 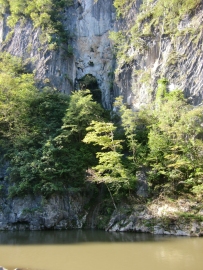 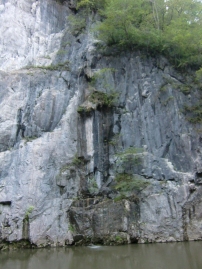 During our rest break, the boatman pointed out a particular “hole” in the cliff across the river from where we were standing and explained that it was good luck to toss a “lucky rock” across the river and into the hole. He conveniently had such lucky rocks on sale: 5 for JPY100. We obliged him by buying lucky rocks but had no luck getting them into the hole. Stones picked up from the river bank were no luckier. But we all amused ourselves for a while with this game before climbing back into the boat for the trip downstream.

As we leisurely drifted downstream, enjoying the late afternoon light, our boatman entertained us by singing a traditional boatman’s song, his voice echoing off the walls of the gorge. It was blissful. 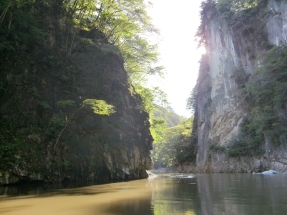 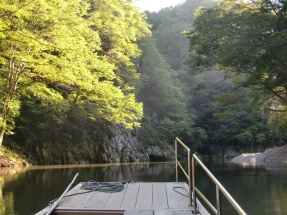 Although we were travelling by car, a car is not required to reach Geibikei Gorge. The boat landing is just a 5-10 minute walk from Geibikei Station on the JR East Ofunato Line. The boat ride is JPY1,500 per person.

© 2017 Jigsaw-japan.com and Vicki L. Beyer
We’re thrilled if you share a link to this page; if you want to re-use in any other way, please request permission.

3 thoughts on “Iwate Off the Beaten Track”