Tottori is known for many things including being the least populous prefecture in Japan and being the home of some of Japan’s most famous manga cartoonists. In spite of its small population, Tottori is host to two airports, one international and the other purely domestic.  Both airports feature in their names and decor some of the famous manga characters given life by their native sons, making them fun destinations in their own right.

Yonago Kitaro Airport is situated near the Tottori-Shimane border and services flights from Korea and Hong Kong as well as Tokyo.  It is also close to the town of Sakai Minato, which is the hometown of Mizuki Shigeru, the cartoonist who introduced Gegege no Kitaro to the world in the 1960s. Kitaro, who remains popular today, is a yokai, or spirit monster.  The world Mizuki created for him is based on early 20th century folklore and ghost stories.  Kitaro has adventures and misadventures facing off against ghouls and ghosts from various other countries, aided by a number of other spirit characters including the reincarnation of his own father as an animated eyeball.

The characters of Kitaro’s world appear throughout the airport, from floor to ceiling and in between. 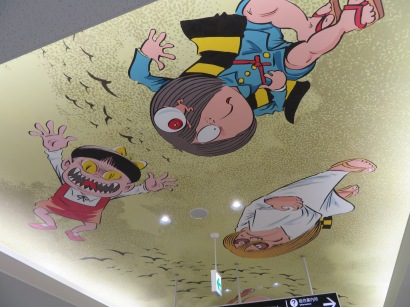 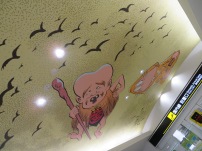 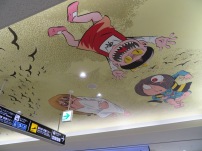 The eyeball, sitting on a box, makes the rounds of the luggage carousel, helpfully reminding arriving passengers to check their luggage tags.  In the outer arrivals lobby we find Kitaro and his eyeball father sitting astride an airplane. 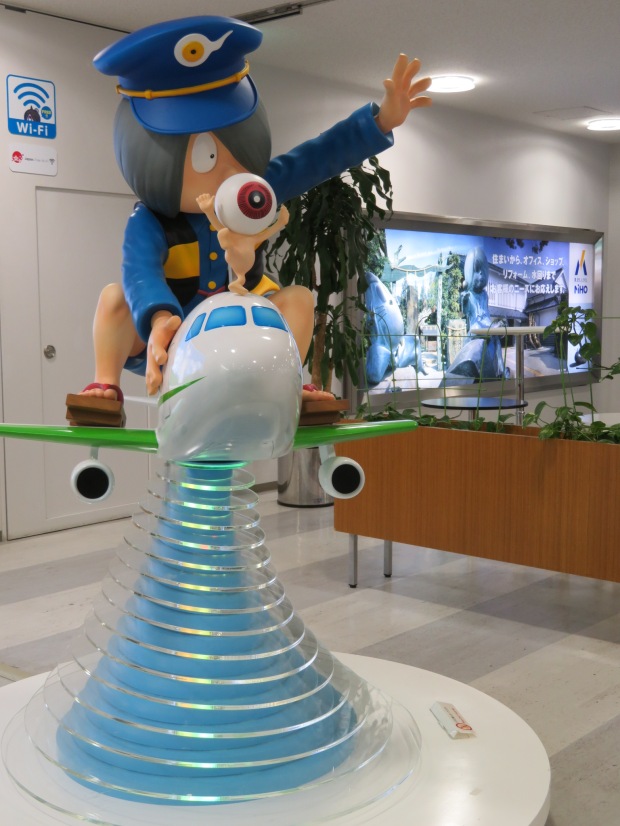 There is even more Kitaro action on the departures level.  In addition to a stained glass window collage of the characters of the yokai (see banner above) and a sculpture suspended from the ceiling, there is a photo spot where visitors can join Kitaro and his eyeball father, who is basking in the hot bath of a tea cup.  A spot on the floor helpfully tells visitors where to stand to get the best photo of the entire scene. 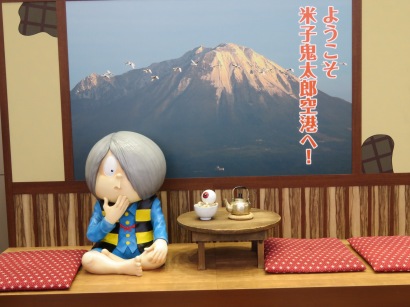 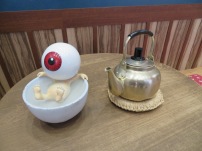 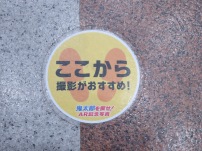 There are other figures where visitors can put themselves into the photo, and even a smart phone treasure hunt! 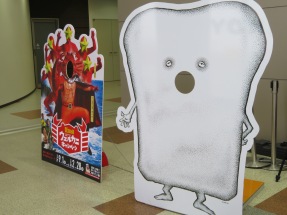 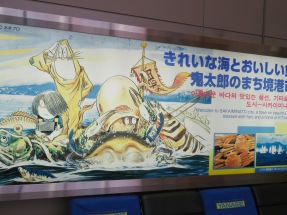 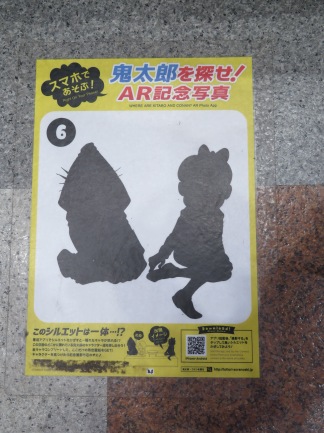 At the opposite end of Tottori Prefecture sits Tottori Sand Dunes Conan Airport.  The Sand Dunes part of the airport’s name is self-explanatory, since it is not far from Tottori’s famous sand dunes.  But Tottori is also the birthplace of Aoyama Gosho, creator of the Detective Conan manga series, hence the addition of “Conan” to the airport’s name.

Perhaps even more so than Yonago, the Tottori airport is completely decked out with Conan regalia.  One might even say it flies the flag of Conan. 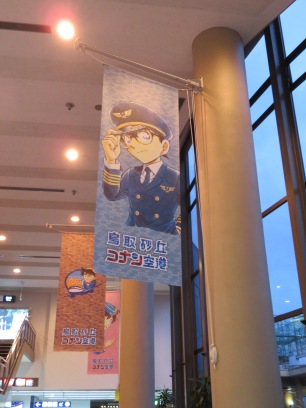 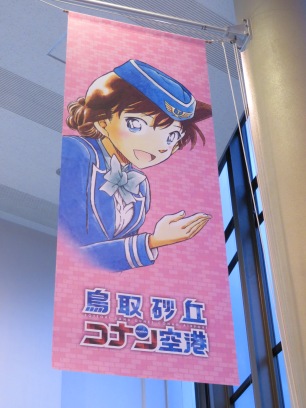 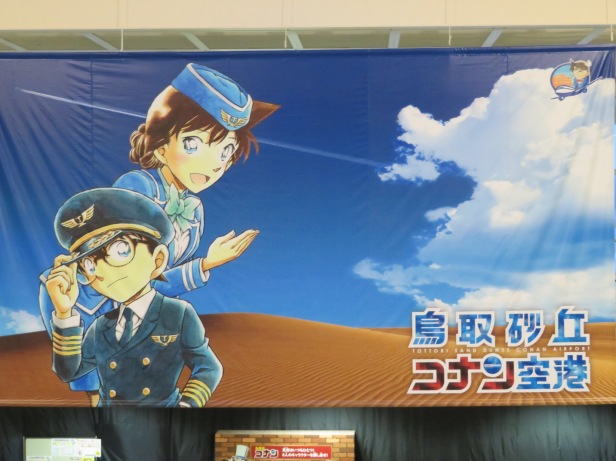 In addition to the themed decor, there are displays in the arrivals hall where visitors can pose for photos with Conan characters. 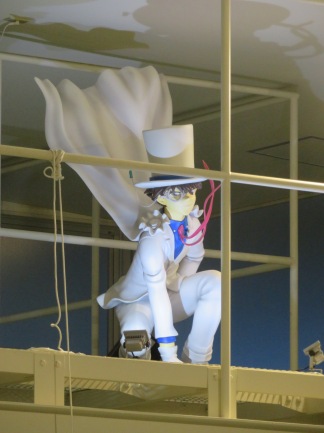 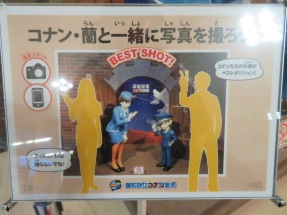 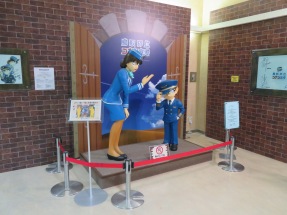 There is even a distorted trick art floor.  Apparently, if you position yourself just so, you can appear in photos as if you are riding the camel.  (I couldn’t quite manage it, myself.) 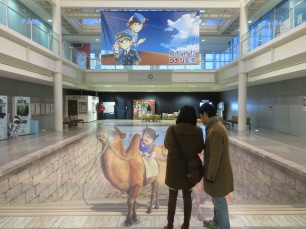 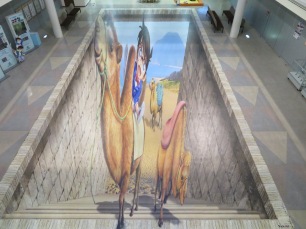 A manga corner allows fans to while away their time perusing the manga or maybe sharing a cup of coffee with Conan’s dapper friend, Poirot. 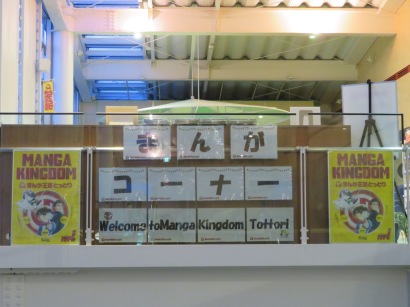 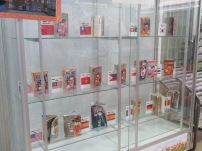 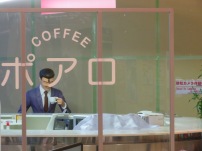 And, like at Yonago, there is a smart phone scavenger hunt, too. 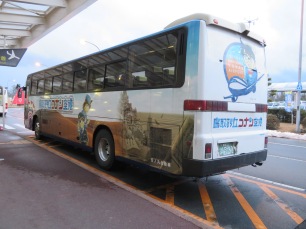 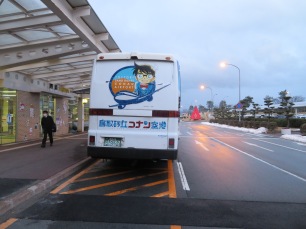 Tottori has so thoroughly incorporated its delightful manga characters into its airports that it becomes especially tempting to travel by air rather than using Japan’s very quick and reliable train and bus services.  Indeed, this thematic treatment has made the airports a “destination” in more than one sense of the word.  Visitors may even feel they need look no further to enjoy this aspect of Tottori.  (In fact, once you get out of the airports, there are museums dedicated to each artist’s work, as well as placards of the famous characters everywhere you look.  But that’s a topic for another blog post.)

One could say these characters animate your tourism.

One thought on “The Airports of Tottori: Tourist Destinations in their Own Right”