Japan’s “Kofun Period”, from the 2nd century to the 7th century, is named for the tumulus burial mounds that characterize it.  Of the 30,000 tumuli extant in Japan, some 750 are believed to contain the remains of emperors or members of the imperial family.  Most of the others were used for local chieftains or other leaders in their communities.  Use of these burial mounds appears to have begun in western Honshu, likely introduced from Korea where similar mounds are found.

In the Tokyo area a number of Kofun tombs were constructed along the banks of the Tama River during the last two centuries of the Kofun Period. These sites can be explored on a walk like the one I described earlier, or as a walk focusing only on this history.

The high ground of that helped define the river course may have been what made this area attractive for burial mounds.  After all, the mounds are effectively man-made hills.  Why not start from a bit of height to make the task a little easier? When I asked at a local museum I was told the site was most likely chosen because the plentiful water source of the river meant that more people could live in the area to build the tombs. Certainly the fact that communities could spare the people power to build the tombs indicates a high level of prosperity.

Views of Mt. Fuji to the west may have been another influential factor, although as an active volcano, likely the mountain looked quite different in those days.

Kofun tombs are characterized by their size and shape.  Many of the earliest tombs were square-based mounds larger than the Egyptian pyramids.  By the 4th century, Japan had evolved its own unique keyhole-shaped structure, comprising two mounds, a bigger, higher round one and a squatter square mound connected to it, resulting in the keyhole shape.  This type of burial mound was used particularly for persons of very high importance, with single mounds (round or square based) still in use for “lesser nobles”.

Since these mounds were earthen with no protective outer shell, over the past 1,500+ years, many have been lost to history.  Nature claimed them, covering them with vegetation so that they often just appear to be hillocks.  It is believed many have also been unwittingly destroyed over the years.

The tombs of Tamagawadai Park

Horai-san, nearly 100 meters long and 37.5 meters tall, is believed to be an early 4th century construction, making it the oldest of this grouping of tombs and possibly the oldest in the Kanto region.  A walking trail goes over top of part of it, but there is little to tell the untrained eye that it is an ancient tomb. 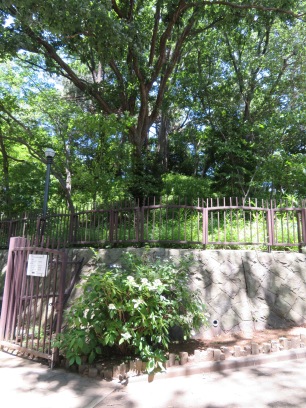 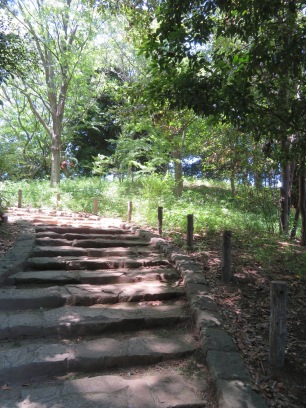 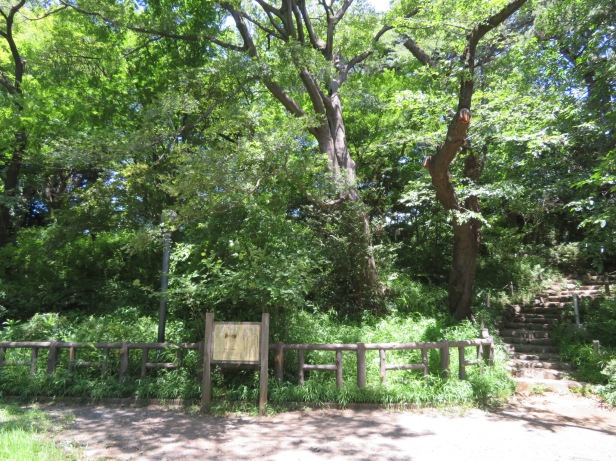 Kamenokoyama, on the other hand, constructed about a century later, is very much a discernible keyhole-shaped tomb, at least when one consults Google Earth view.  It is slightly longer and wider than Horai-san, but is not as tall.  The site is fenced off and cannot be entered by the general public.

The Kamenokoyama Kofun was excavated and studied in the late 1950s, revealing much about the burial practices of the time.  The “Kofun Exhibition Room” that stands just north of the kofun contains a replica of the burial chamber, including the sarcophagus, along with displays on how the mound would have been constructed and exhibits of the weapons, tools, and other items found inside.  (Open 9:00-16:30 Tuesday through Sunday; admission free) 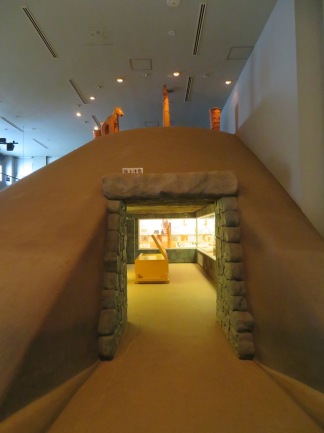 One of the displays shows that entrance to the chamber inside the mound was from the “side”, and faced the river.  A signboard containing details about the mound sits approximately where the entrance was excavated. 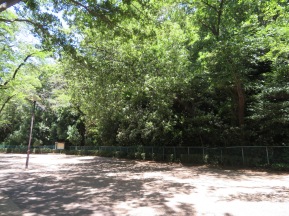 You may have noticed clay figurines depicted as standing atop the replica burial chamber.  These are haniwa, effigies placed atop tomb sites to guard it (better than sacrificing humans to guard the departed, as in some cultures, right?).  Originally just bisque-fired clay cylinders, haniwa evolved into depictions of anything from warriors to horses or other animals to houses.

Haniwa are not “life-like” in the way of Xian’s famous terracotta warriors.  Rather, they are stylized figures.  Nonetheless, they are a remarkably complex and well-recognized art form.

The human figures often reveal details of the dress and weapons or tools of the day.  They display a range of facial expressions, too.  The wide range of animal figurines also reveals much about the lifestyles of the times; scholars have tracked the changes to horse livery over time using haniwa.

Most haniwa were made at kiln sites near to the tombs, probably to reduce breakage in transit.  Indeed, there is said to be a haniwa kiln site on the other side of nearby Denenchofu Station, although nothing is left of it today.

Haniwa are still being produced today, not as grave guardians, but more for their artistry.  And they make great garden gnomes!

Tamagawadai Park is a long, narrow site.  Between Horai-san at the north end and Kamenokoyama on the south stand eight other ancient tombs, believed to be largely from the 5th and 6th centuries.  Since they look like tree-covered hillocks, they are helpfully numbered and labelled so that visitors can identify them. 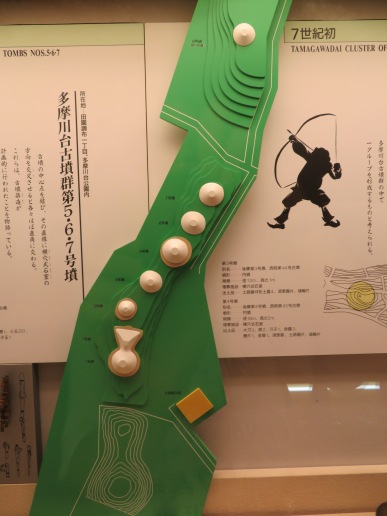 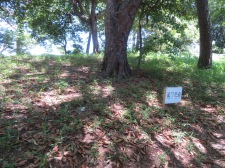 Tamagawa Sengen Shrine, just south of Tamagawadai Park–also described in another post–, sits atop a hill that turns out to be another kofun burial mound.  Although I could find no marker or other information about this kofun when I visited, it is interesting to keep this in mind when visiting the shrine, especially since the hill is actually rather steep to ascend (hard to tell in this photo, which is taken from halfway up the hill.

Just under two kilometers south of Tamagawadai Park is Matsuyama Unoki Park, site of the Unoki Tomb.  This is a “tunnel tomb”, built sometime between the late 6th and early 8th century.  Over this period, tomb mounds fell out of fashion as Buddhism began to take root and death-related rituals evolved.  What’s particularly interesting about this site is that the excavated entrance was left intact and open.  Framed by three large stone blocks (presumably original) and closed only with a plexiglass barrier, visitors can peak inside to see the tunnel/chamber.  Apparently the plexiglass can fog up in humid times, so it is outfitted with a manually operated wiper.  Replicas of the three blocks that originally sealed the entrance stand nearby. 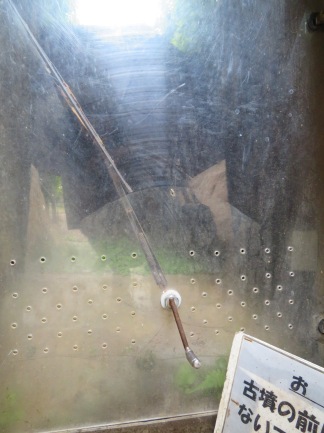 By heading north instead of south from Tamagawadai Park, there are other kofun within a distance of two to four kilometers, most particularly in the area just north and south of Todoroki Gorge.  But I’ll save a visit to those sites for another day.

3 thoughts on “Where the bodies are buried: Kofun burial mounds along the Tama River”