Mt. Asama, on the border of Nagano and Gunma prefectures, is one of Japan’s many active volcanoes and the most active one on Honshu island.  Yet it is usually relatively approachable and some interesting sights nearby testify to its geological impact.  Two of those are Shiraito Falls and Onioshidashi Park.

Just a 25 minute bus ride from Karuizawa station, Shiraito Falls is a refreshing sight in the summer heat.  It is also unique in that it is not fed by any river flowing above it.  Rather, the water of the three meter tall and 70 meter wide falls comes straight out of the rock looking like strings of white thread (shiraito, in Japanese).  Water that soaked into the flanks of Mt. Asama some six years earlier finds this spot to emerge from the earth, having encountered a tough layer of stone that it is unable to penetrate, to instead pours over to form the falls. 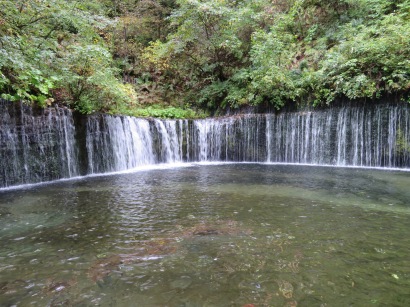 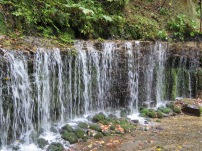 Intrepid visitors may choose to hike from Karuizawa, following the course of the Yukawa River formed by the waters of the falls.  Of course, the downhill hike may be preferable.

For the really adventurous, instead of returning to Karuizawa after a visit to the falls, continue on to Onioshidashi Park.  It’s a bit tricky to accomplish by public transportation, so best to confirm the bus schedules before you leave Karuizawa station–you’ll need to walk about 1.5 km. from Shiraito Falls to the bus stop at Minenochaya to catch a bus to Onioshidashi Park, but the buses don’t run that often (it’s easier to do the whole thing by car).

Onioshidashi means “emerging devil” and this park is a moonscape created by the 1783 eruption of Mt. Asama.  Most of Mt. Asama’s 20th and 21st century eruptions have been ash; occasionally the mountain spews out some rock, making the 1783 eruption the last one to involve a major pyroclastic flow including lava and large chunks of molten rock. 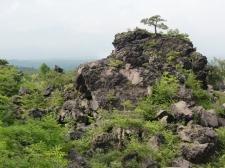 The park is open from 8:00 to 17:00; admission is JP650 (click here for a discount coupon).  There are paved trails among the rocks and around the boulders, rough and craggy, even after more than 230 years.  At the same time, it is interesting to observe what plants have managed to take root in crevices in the rock over the past two centuries.  Mother Nature’s patience–taking millenia to turn volcanic stone to soil–is on display for all to see.

Human intervention is also visible, not only in the form of winding trails through the boulders, but also in various small structures around the park. 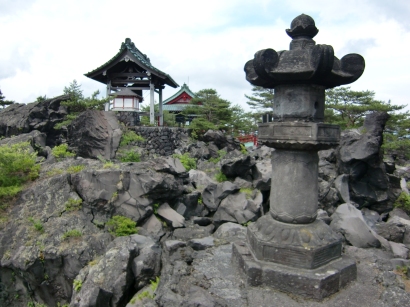 And in the distance, Mt. Asama, rising to a height of 2,550 meters above sea level, watches over it all.  Doubtless the mountain is constantly considering its next move. 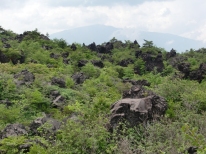 Not far from the entrance to Onioshidashi Park is the Asama Volcano Museum–a little pricey at JPY600 (children JPY300).  The museum has displays on geology and vulcanology, but most specifically the volcanic activity of Mt. Asama over the past 50,000 years.  There’s not a lot of English available, but enough to understand the exhibits.  Visitors may conclude that volcanoes deserve at least as much respect as earthquakes here in Japan.