Particularly after World War I (perhaps earlier and continuing even now), it was not unusual for military forces to build underground facilities.  The principal reasons were doubtless concealment–their presence was harder to detect–and protection–they were harder to be destroyed by the enemy if they were detected.  Examples include the facilities of France’s Maginot Line, Singapore’s Battle Box, and the Former Japanese Navy Underground Headquarters in Okinawa.

The latter, situated just 15-20 minutes by car from Naha Airport, is a great place to gain further insights into the Japanese position during the Battle of Okinawa, a protracted and tragic conflict fought from April 1 to June 22, 1945.  The facility includes over 450 meters of tunnels containing several working and storage rooms as well as a gallery at the entrance with exhibits on the battle and subsequent aftermath for the people of Okinawa.  Sobering to visit, it offers insights into the war that are difficult to find elsewhere in Okinawa or the rest of Japan.

The headquarters is inside a 74 m high hill in the Tomigusuku area.  Hundreds of years ago, watchmen would light signal fires from here–which could be seen by Shuri Castle about five kilometers away–to announce the arrival of ships from overseas.  The hill has now been turned into a park, known as Kaigungo Navy Headquarters Park, which has some displays on the battle fought here as well as modern, peaceful playground and picnic areas, and  lovely views of the entire area.

Visitors begin in the gallery, with its display of photos of scenes of the time as well as vintage maps explaining various aspects of the battle, and even a display on the final Japanese surrender of the island to the Americans.

Perhaps most poignant are explanations of how the Japanese military conscripted local Okinawans (men, women and children) as forced labor to build the headquarters and other facilities.  Among the awful results of this policy was the enormous loss of life, much of it undocumented because of the way in which Okinawans were pressed into service.

There is also a display of an excerpt from the final telegram to Tokyo of Rear Admiral Minoru Ota, who subsequently shot himself in the tunnels together with six of his senior officers, urging Tokyo to acknowledge and appreciate the sacrifice made by local Okinawans to the Japanese war cause. 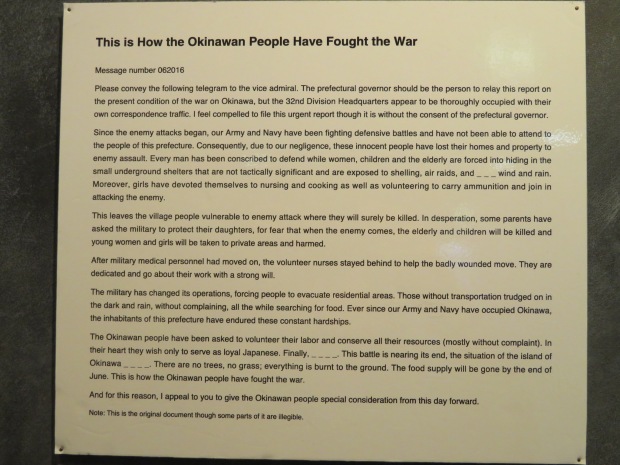 It would seem the purpose of having the tunnels open to the public is an admonition for peace, and this prayer is reiterated in various places, even on the brochure given to visitors.  It is also evidenced by the presence of senbazuru, collections of a thousand origami cranes that represent a wish or prayer, at the entrance. 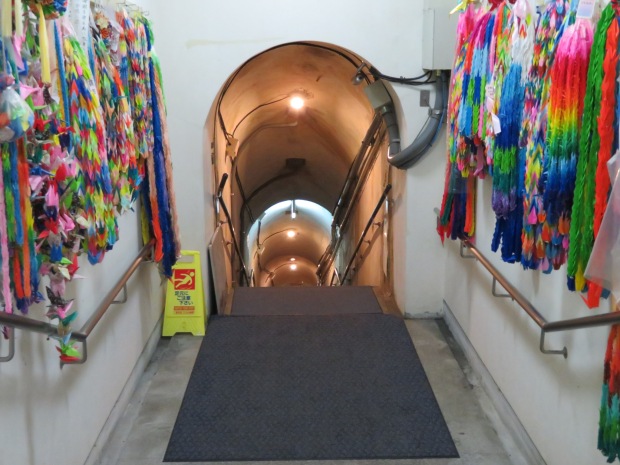 Apparently the tunnels were dug out using only hand tools such as shovels and picks in late 1944 and early 1945, largely using the forced labor of local Okinawans.  The tunnels, 20 meters deep, were then reinforced with concrete.

Even today the tunnels are dimly lit with electric light.  The positioning of the original electric wires and lighting is occasionally pointed out. In 1945 the tunnels must have been even more dimly lit. 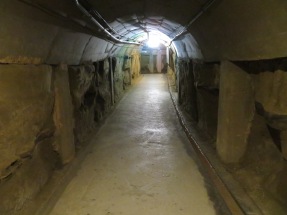 The rooms hewn into the hill include a communications center, an infirmary and alcoves for storing supplies and even electricity generators. 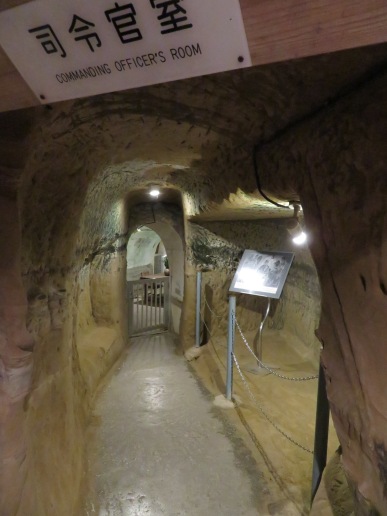 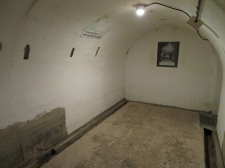 The Commanding Officer’s room has a small display on Rear Admiral Ota’s final decision, and a Buddhist shrine honoring the men who took their lives here.  I’m told there was once a diarama display with mannequins but the families of the men found it too realistic and requested its removal.  While of course it is reasonable to accept their wishes, its absence detracts from the realism of the environment. 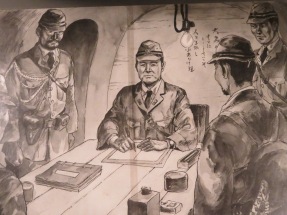 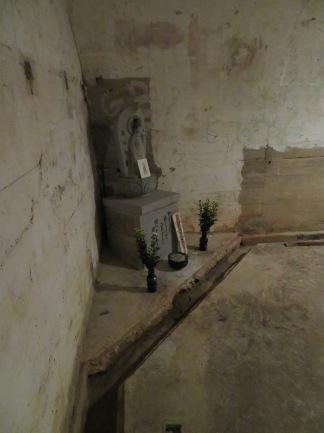 When the Americans attacked, one of the methods they used to force the Japanese out of the tunnels was to lob in gas or explosives, and then, of course, capture those who emerged.  In addition to the officers who shot themselves to avoid what they saw as a more ignominious end, other chose to die in the tunnels by exploding grenades.  Scars on the walls tell this sad story. 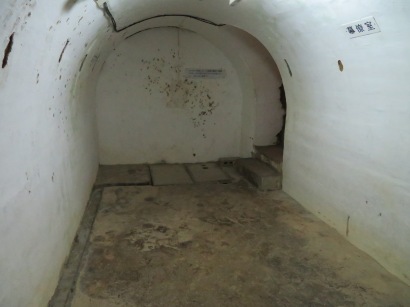 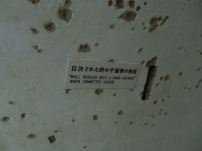 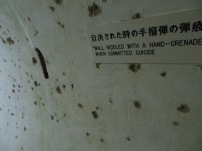