Tokyo has a close relationship to water.  From its earliest days as a city, its many rivers  large and small have been well utilized and often diverted to form various canals and other waterways as well.  Early Western visitors even went so far as to refer to Tokyo as the Venice of the East.

While many of those historical waterways no long exist (at least not above ground), new waterways have been created as landfill projects push the city further into Tokyo Bay.  Ota-ku is one part of Tokyo that seems to be steadily growing into Tokyo Bay.  Fortunately, the modern landfill areas often include spacious public parks.

Omori Furusato no Hamabe Koen is one such park.  One of its most distinctive features is the white sand beach facing a broad body of water where a small river meets a landfill-generated canal.  Like many Tokyo beaches, swimming is prohibited, but that doesn’t stop people from enjoyed spending time on the beach and even wading in the water. 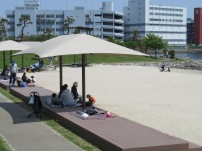 It’s  also a popular spot for paddle sports, which are particularly being celebrated this weekend at the Tokyo Canoe Festival in Ota 2019.

The festival is being held on both April 20 and April 21 from 10:00 to 16:00.  It is principally a celebration of sea kayaks, although there were also paddle boards and other boats.  Paddle sports are growing in popularity, especially in the lead up to the 2020 Tokyo Olympics, in which the rowing competitions will be held just a couple of kilometers from Hamabe Koen at Sea Forest Waterway on a new man-made island just south of Odaiba. 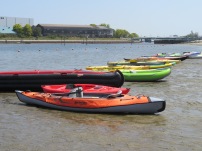 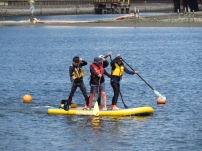 Kayak makers, brand representatives, and members of a local “canoe club” and the Ota Canoe Association, as well as members of the Ota-ku tourism promotion team were all there to ensure that people had a good time and learned a lot about paddle sports options. 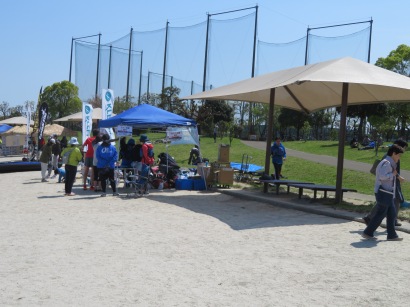 You can even try out a sea kayak for as long as you like on the day for JPY500 (safety gear and basic instruction provided).  The only limitation is that you have to stay within the park’s water area and cannot get out into the canals.

If you enjoy it, you can come back any Saturday morning at 11.  That is when the members of the Omori Aobeka Canoe Club get out on the water together. And they’re happy to welcome visitors and new club members, even ones who don’t speak Japanese.  One member showed me photos of the club’s recent trip up the Meguro River during cherry blossom season.  What a different perspective on the blossoms!

I was lucky to be able to join a guided tour that allowed half a dozen of us to get out into the canals and explore a bit. 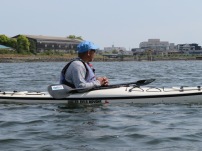 We circled nearby Showa-jima.  Our route took us under several bridges, including two used by the Tokyo Monorail.  We could see various boats, and get a very different view of the shoreline, which was mostly industrial structures and warehouses, cranes busily moving.  In addition to seeing cormorants and sea gulls soaring in the air or bobbing on the water, a few fish jumped from the water to entertain us.  We also saw planes and even a helicoptor land and take off at Haneda Airport. 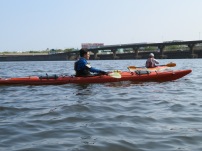 After circling Showa-jima, we headed up the little Uchi-kawa river, which took us into a residential neighborhood.  We were far below street level where the quiet and the narrowness of the river made our trip feel intimate.   The tide was coming in quite quickly, but we were able to see so many mussels and oysters growing below the high tide line on the river’s rock retaining walls. Although the cherry blossoms were finished, there were some young dogwood trees blooming.  The guide commented that if you ignored the modernity of the buildings, you could almost imagine what old Edo must have felt like. 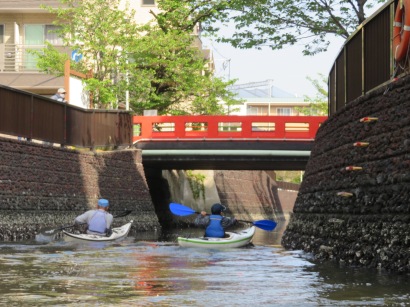 There will be two guided tours like this on Sunday as well (10 am and 1 pm), but apparently they are already fully booked, so if you want to get out on the water, borrowing a sea kayak for the day as mentioned above may be your only option–and not a bad one!  (I suppose you could ask to stand by for a tour in case there are any no-shows…)

Hamabe Koen also has snack food service and restroom facilities and a nice lawn area popular with picnickers.  It is a park with a wonderful waterside feel, worth a visit at any time.  If you’re ever in the mood for a waterside picnic on a sunny day, but don’t want to go far, this is definitely a place to keep in mind! 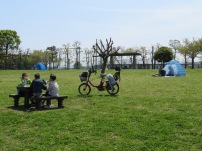 One thought on “A Chance to Explore Some Tokyo Waterways”