For centuries, Japanese gardens have been places to stroll, enjoying greenery and seasonal changes set off by a central pond.  We often think of such gardens as dating to the age of sophisticated samurai, who wrote poetry under a full moon or performed tea ceremony in little huts.  Yet many fine classic gardens were actually established by industrialists during Japan’s late 19th/early 20th century industrialization.  And many of these have been opened to the public over the years.  A fine example is Yokohama’s Sankeien.

Sankeien is classic in the sense of being centered on a pond, with a hillock and other topographical features and seasonal blooms.  But it is also a kind of outdoor architectural museum, with a number of classic Japanese buildings having been moved to the garden from other parts of Japan over the years. 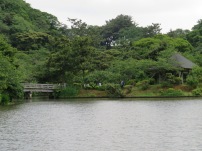 The garden was begun by Tomitaro Hara (born Tomitaro Aoki and later known as Sankei Hara), a highly successful Yokohama silk trader/exporter and avid art/antique collector, at the beginning of the 20th century on land first acquired by his adopted grandfather in the late 1860s.  Sankei’s adopted grandfather, Zenzaburo Hara, had built a villa on the highest point of the 17.5 hectare (43 acre) site in the late 1880s and after Sankei inherited the land he built a home for his family in a lower part of the grounds and began creating the garden.

In 1906, the area of the garden around the pond, known as the “outer garden” was opened to the public, while a narrow valley known as the “inner garden” remained private for Sankei and his family.  Over the next three decades, both the outer garden and the inner garden continued to be developed with various buildings being moved in to both enhance the garden and preserve the structures (remember, Sankei was an antique collector).

Sankei died in 1939 and the garden suffered extensive damage during WWII.  The entire garden was re-opened to the public in 1953 under the management the Sakeien Hoshokai Foundation, an organization committed to the preservation of the garden.

Smartphone users will find QR codes (and wifi) available at various locations throughout the garden to provide suggested routes for a visit, ranging in length from 30 minutes to an hour and a half, usually proceeding counterclockwise around the pond.  In fact, I’d recommend planning on spending at least 2 hours, and stopping in at Bototei inside Sankei Memorial Hall for a cup of classically-prepared green tea and a sweet (JPY500). 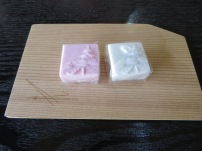 Sankei Memorial Hall also contains a small gallery with displays on the garden as well as artwork drawn by Sankei and some of his contemporaries.  You can get other sweets or light meals at two other tea houses inside the garden.

Throughout the garden there are excellent explanatory signboards in Japanese and English, usually also sporting vintage photos of that particular feature of the garden.

It seems there is always something blooming at Sankeien.  In this early summer season it is irises, azaleas, and hydrangeas.  Next month water lilies and lotuses will take center stage. 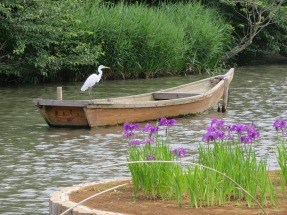 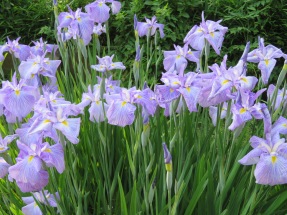 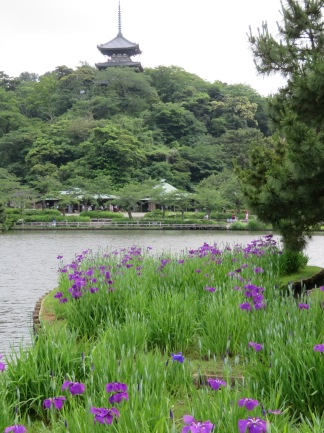 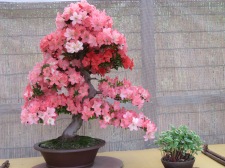 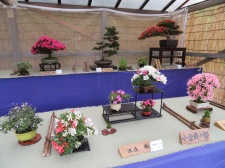 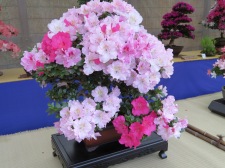 Each end of the inner garden is delineated by two historical gates originally located at Saihoji temple in Kyoto.  The “gomon” gate is so picturesque that even bridal couples use it as a backdrop for their photo shoot.

Many of the historical buildings of the inner garden are nestled among trees and streams in a small valley, creating a calm sense of intimacy.  Among the buildings here are a small temple structure originally commissioned in 1591 by Toyotomi Hideyoshi and a 1623 villa built for Tokugawa Iemitsu, the third of the Tokugawa shoguns. 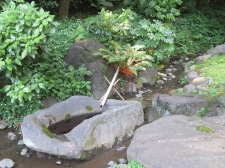 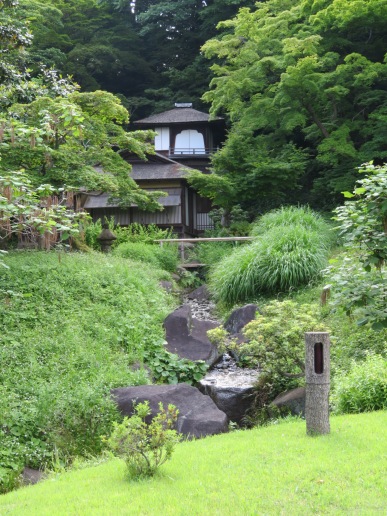 The lower part of the inner garden features a tea house designed by Sankei himself, nestled in a stand of bamboo. 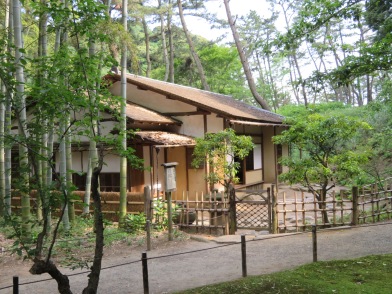 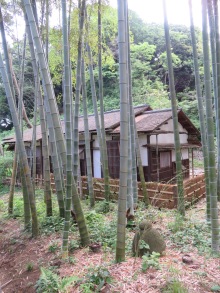 The three-story pagoda on the hill overlooking the pond has become one of the symbols of Sankeien.  Originally built on the site of Tomyoji temple in Kyoto in 1457, it was moved to Sankeien in 1914 and is regarded as the oldest three-story pagoda in the Kanto region.  Also atop this hill are the ruins of Zanzaburo’s 19th century villa, which was destroyed in the 1923 Great Kanto Earthquake. 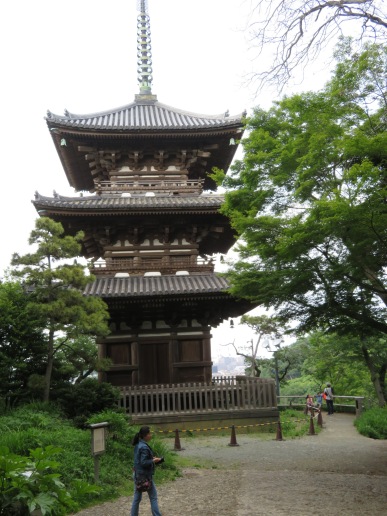 At the top of the pond in the outer garden is another valley.  Here can be found a couple of historic tea houses and even a temple moved here from Kamakura’s Tokeiji temple, as well as a grove of gnarly plum trees, referred to as “garyobai”, crawling dragons. 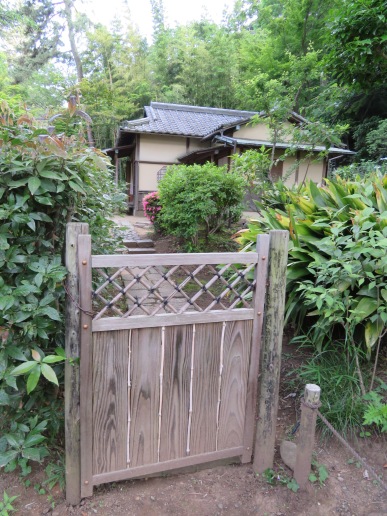 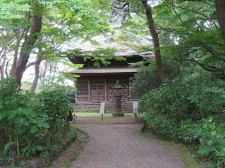 Another striking building in this valley is the gassho (praying hands) style farmhouse, a massive structure with a steep thatched roof.  The house was moved here in 1960 from an area near Shirakawa-go (famous for its gassho-style houses) that was about to be inundated by a dam project.  Visitors can go inside to see a fire burning in the irori fireplace and a display of traditional farm implements. 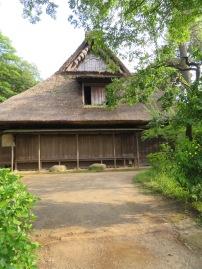 One of the most recent additions to the garden is the former main fall of Tomyoji temple, originally built in 1457 and moved to Sankeien from Kyoto in 1987.  Nearby is a small tenjin shrine, dedicated to the god of learning.  This part of the garden is relatively narrow, nestled between a hillside and the pond.  Shrines and temples are often situated with water in front and a hillside behind for geomancy reasons.

In addition to the English guidance available via QR codes and the bilingual signboards, a free English language guided tour is available at the garden from 2:00 pm on Mondays, Wednesdays, Thursdays, Saturdays, and Sundays.  Participation is limited to the first 20 people and the gathering place is a signboard just inside the main gate.

If you’re interested to know more about Sankei Hara, his art work, and his art/antique collection (there’s a lot to know!), an exhibition based on his collection opens at the Yokohama Museum of Art on July 13, 2019 (mark your calendar now!).  Details here.

Sankeien is open daily from 9:00 am to 5:00 pm (closed for three days at year end).  Admission is JPY600 (JPY200 for children and pensioners resident in Yokohama).

Sankeien is most easily reached by bus.

Paid parking is also available.  As I was leaving just as the garden was closely I noticed several taxis waiting at a taxi rank near the main gate, as well.  Obviously they are aware they can catch passengers at that time of day.