On January 22, 1954, a 25 meter long wooden fishing boat named Dai-go Fukuryu-maru (in English “F/V Lucky Dragon #5”) set sail from Yaizu, a fishing port in Shizuoka, Japan, with a crew of 23.  The boat was scheduled to be at sea for approximately two months, making a clockwise sweep around an area of the Pacific known as the “Midway Sea”.  For various reasons, they changed their original plans and were farther south, near the Marshall Islands, on March 1, 1954 when the Americans tested a 15 megaton hydrogen bomb on the Bikini Atoll, the fallout from which–significantly larger than originally anticipated–rained radioactive ash on them.

While these fishermen were not the only ones impacted by the unanticipated power of the detonation, radioactive ash fell on residents of some of the Marshall Islands and even into the ocean as far as 1,000 kilometers from the detonation site, the fisherman’s fate is perhaps the best known.  Their fishing boat is preserved in a museum in Tokyo, also providing a chance to learn more.  Read on. 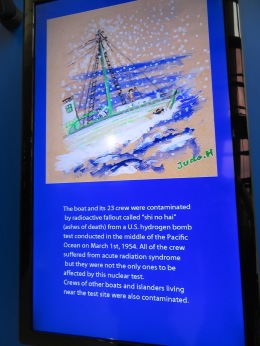 Shortly after the detonation on March 1 (known by the Americans as Castle Bravo), fine ash said to be “calcinated Bikini Island coral” that had absorbed dangerous levels of radioactivity, began to fall on the Fukuryu-maru and the sea surrounding it.  Although the fisherman wanted to leave the area as quickly as they could, they first pulled in their fishing gear, a delay that further exposed them to the radiation as the ash fell for about three hours.

Not realizing what they were dealing with (having altered their originally planned course, no one realized they were in the area and they had received no advance warning of the detonation), they also used their bare hands to scoop up the ash and bag it, since the volume that had fallen on their vessel required clean up.  One man even tasted the ash in an attempt to determine its origin.  By nightfall, the men’s skin was showing signs of burns from the ash and they were beginning to feel unwell.

It took nearly two weeks for the Fukuryu-maru, with its maximum speed of just five knots, to make it back to Yaizu.  By that time most of its crew members were quite ill with acute radiation syndrome (ARS).  Japanese scientists immediately recognized the problem and even made a request to the US Atomic Energy Commission for advice on how to treat the men (the request was never answered–apparently the Americans felt they had “national security” reasons not to disclose the nature of the fallout as doing so would also reveal the design of the bomb).

Doctors did what they could to treat the men, but one crew member, the radio operator, succumbed to complications about six months later.  Fortunately, the remaining crew members recovered, although they apparently suffered social prejudice throughout their lives, similar to that experienced by survivors of the Hiroshima and Nagasaki bombings.

The Fukuryu-maru itself was quarantined in a remote section of Yaizu port and most of its catch was destroyed (apparently a couple of large tuna were sold before the quarantine went into effect and could not be recovered).  Geiger counters were used in many Japanese fish markets for some time thereafter in an attempt to ensure food safety and quiet public concerns.

Decontamination procedures were carried out on the boat, which later became a teaching vessel for the Tokyo University of Fisheries for about a decade and was then scrapped, finding its way to a junk yard on a man-made island in Tokyo Bay.

In the 1970s it was decided that the junk yard island would be cleaned up and enlarged.  Basically the junk was all buried and a park established in its place.  The surrounding expanded landfill was turned into industrial and commercial areas.  This enlarged island was dubbed Yumenoshima (Island of Dreams). 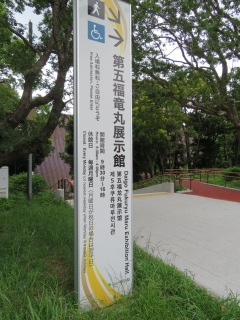 During the clean up, people realized that one of the scrapped vessels was the Fukuryu-maru and a move began to preserve the vessel because of its historical importance.

Thus was born the Daigo Fukuryu Maru Exhibition Hall, a museum housing the boat and related displays.  Just a 10 minute walk from Shin Kiba station, the museum is open daily except Mondays (open on public holiday Mondays and closed the following day) from 9:30 am to 4:00 pm.  Admission is free.

The museum sees itself as having two missions: 1) to raise awareness of the dangers of nuclear weapons, and 2) to share information on the work conducted on 20th century wooden fishing vessels.

The central object of the museum, both literally and figuratively, is the Fukuryu-maru itself. 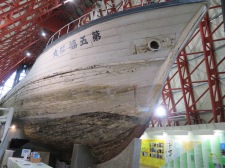 On the museum’s perimeter walls are displays on the Castle Bravo detonation and what the fisherman experienced as well as displays on other radiation incidents.  There is also an explanation of the antinuclear movements that took place in Japan as a result of this incident and even a map of current nuclear-free zones around the world. 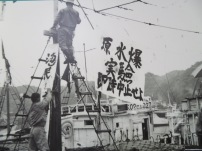 Visitors can also climb a catwalk to see the working decks of the boat.  Use your imagination to visualize fisherman hauling in a catch, or bagging up nuclear ash with their bare hands.

Hard core movie fans may also recall that the fate of the Fukuryu-maru influenced the plot line of the original Godzilla movie that premiered in October 1954, with the name “Godzilla” (a mash up of “gorilla” and “kujira”, the Japanese word for whale) being first uttered by an old fisherman in the movie, the only survivor of an attack on his fishing boat by Godzilla, a long-dormant deep sea monster who has been awakened by the undersea nuclear tests of the early 1950s. 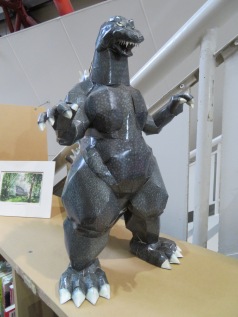 Even the museum’s tiny gift shop has Godzilla on display.

While the movie didn’t go so far as to make Godzilla a mutant produced by the testing,  the film’s ending implied that if nuclear weapons testing continues another Godzilla may rise in the future.  (Cliffhanger endings are, of course, a signal of a potential franchise and, indeed, Godzilla is the longest running film franchise in history.)

On the grounds outside the museum visitors can see a memorial for Aikichi Kuboyama–the crew member who died in 1954–, another memorial for the contaminated tuna that had to be destroyed, and the boat’s original engine.

Visitors who have time may also want to stroll along the waterfront to the Yumenoshima Marina and/or visit the Yumenoshima Tropical Greenhouse Dome, an indoor tropical garden said to be heated by the decomposing trash buried beneath the park.  Notwithstanding that rather weird heat source, the garden itself is beautiful and a nice way to connect with nature after the harsh (albeit valid) message of the dangers of radiation poisoning.