Okinawa is Japan’s tropical paradise: sun, sand and palm trees.  It’s also one of Japan’s rainiest places.  Tourists can easily find themselves caught in a cloudburst…or days of rain when there’s a typhoon in the vicinity.

But the intrepid tourist needn’t to be deterred by a little precipitation (typhoons, of course, are another matter).  When the one day I had available for a visit to Naha’s Shuri Castle managed to be  rainy one, I grabbed an umbrella and went for it.

Shuri Castle dates back to at least the mid 15th century, when the Ryukyu Kingdom’s cultural flowering began.  For several centuries the fortified hilltop complex of buildings was the seat of government as well as the residence of the Ryukyuan royal family and a showplace used to host ambassadors and other key foreign visitors from the island’s many Asian trading partners.  Interestingly, Commodore Matthew Perry attempted to force a visit to the King of the Ryukyus in Shuri Castle in 1853, but was rebuffed.  Apparently he had not received an invitation.

After the annexation of Okinawa by the Meiji government in 1879, the royal functions of the castle ceased and it was allowed to slowly fall into disrepair in spite of being consecrated as a shrine in 1923 and as a national treasure in 1925 (budgetary constraints, apparently).

During the years of the Pacific War, the castle was used as a military installation.  One consequence is that during the Battle of Okinawa the castle was shelled for three days and ultimately burned on May 27, 1945.

Decades later, various castle buildings were reconstructed to their 18th century condition and the castle was re-opened to the public from 1992 with further reconstructions ongoing.  Shuri Castle and several other gusuku-style fortifications elsewhere in Okinawa received UNESCO World Heritage listing in 2000.

Shuri Castle sits at the highest elevation of Naha (130 meters above sea level), affording an expansive view of Okinawa island.  Like any hilltop castle, it leverages the height with extensive stone walls, giving it a strong defensive position.  Unlike castle walls on the Japanese mainland, Shuri Castle uses Okinawan limestone that has been cut into blocks that fit together tightly.  Older walls have become a burnished gray, while reconstructed walls of recently quarried stone are pale and gleaming. 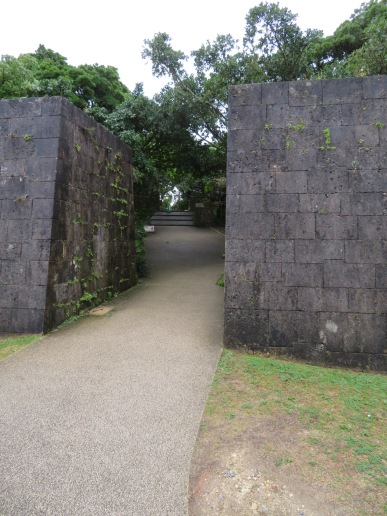 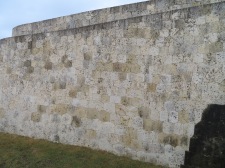 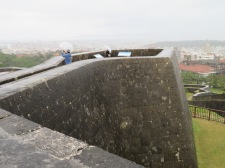 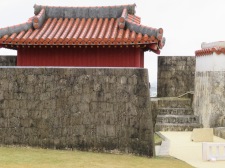 As you would expect, part of the castle defenses includes labyrinthine approaches and narrow gateways. 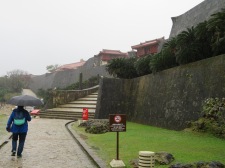 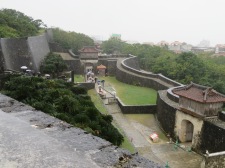 In one of the castle’s outer courtyards, there is a traditional sundial, known as nichieidai, used to set the official time for the islands.  It being a rainy day, I couldn’t tell what time it was, but it was an interesting fixture, with the 12 Chinese zodiac animals indicating the time (each stands for a two hour period).  It is said that the sundial indicates time about half an hour later than Japanese standard time–logical when you consider how far west the islands are relative to the Japanese mainland.

Once past the various fortifications, visitors find themselves in the una forecourt where courtiers gathered for various ceremonies and visitors presented themselves before entering the palace.  I like to think the colors were intensified by the wet conditions of the day. 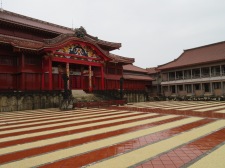 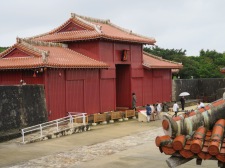 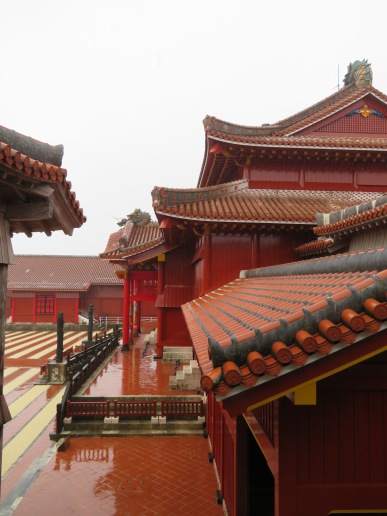 As Ryukyu was a nation that traded across Asia, various architectural influences are obvious, especially the Chinese!  This influence is also apparent inside the “throne room” of the main palace building.

Interestingly, while the public areas inside the palace show this Chinese influence, the private residential suites of the royal family appear far more Japanese in style.

Behind the main palace are further wall reconstructions at the castle’s highest point, from which there are views of the entire castle complex and pretty much the rest of the island.  Although the color of the roof tiles is different from that of Beijing’s Forbidden City, the overall cluster of rooftops is reminiscent of that great complex. One can guess that other buildings will be reconstructed in this area in the future as well. 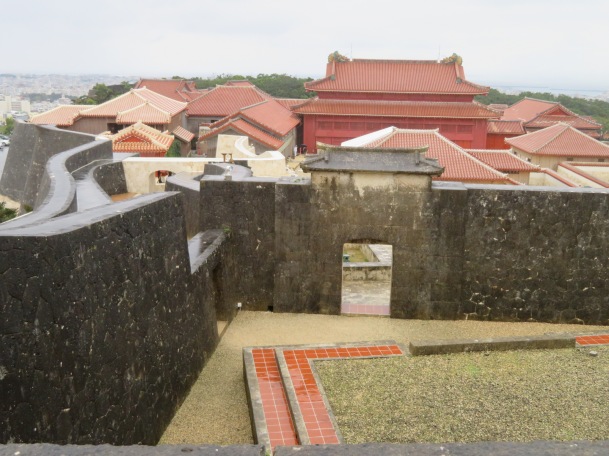 From this uppermost part of the castle the visitor route returns to the central courtyard and the museum in one of the buildings flanking it.  The museum contains various details of the castle’s history and construction, as well as displays on aspects and accoutrements of life in the castle, such as the king’s bejewelled crown and a diarama of how courtiers assembled in the forecourt. 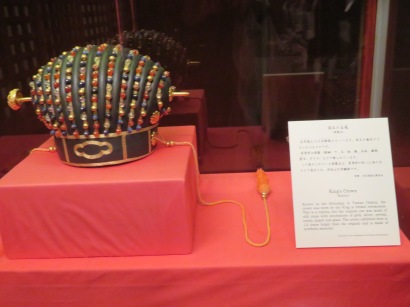 For visitors, the site of Shuri Castle is now called Shuri Castle Park and includes a visitor’s center at the lowest point of the grounds.  There is also significant green space below the castle itself, between the visitor’s center and the upper part of the castle, much of it still enclosed in castle walls.  Although the rain had stopped by this point in my visit, the jungle-like wooded area was lush and dripping.  An ominous sign posted among the greenery warned to watch out for habu, Okinawa’s famous poisonous snakes. 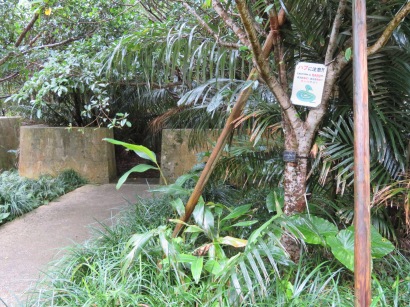 Also scattered across the castle grounds, including near the palace, are small stone enclosures called utaki, delineating sacred areas that were used for various religious observances.  There are 10 of these altogether, although I didn’t manage to find all of them.  Maybe that’s the downside of visiting on a rainy day. 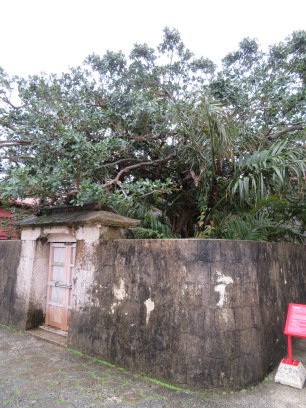 One thought on “Shuri Castle on a rainy day”