The Shinohara family of Utsunomiya were a long-established mercantile family and a visit to their beautifully-preserved home, just minutes from Utsunomiya, offers insights into how successful merchants lived, as well as into the architectural styles of late 19th century Japan.  As one might expect of a large family home in this area, it is faced in Oya stone.  At the conclusion of this post I’ll provide information on how to combine a visit to this house with a tour of other nearby sites associated with Oya stone.

The Shinohara family were successful soy sauce brewers.  While the site includes the 1895 family home and three large warehouses (also faced in Oya stone), the original soy sauce brewery located a little further behind the house (an area now occupied by modern buildings) was destroyed by fire during World War II.

As with many homes from which businesses were operated, when one enters from the street, the first room encountered is a business reception area, part of it at street level (now with a concrete floor, but possibly the original floor was compacted dirt) and part of it an open tatami-matted room.  In the tatami room is a caged “pay desk” sporting an abacus, an accounts book and an old black rotary phone.  Embedded in the wall above it is a god shelf; apparently the staff would have gathered here each morning to pray for a successful day.  The staff would also have worn cotton happi, such as those hung on display.  Even the admission ticket takes this shape, an homage to the workers. 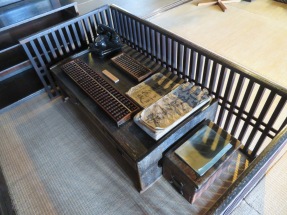 The family home begins beyond, with spacious rooms overlooking a pretty little garden.  While the tokonoma alcove would have originally been used to display art and other prized family possessions, it now houses a display of old lanterns and lamps.

One room has a display case of business memorabilia and boards of historical photographs and maps to provide more historical perspective.

Ascend the steep stairs to the second floor for more.  A small room facing the street appears to have been servants’ quarters and is furnished with a deep tansu chest made to contain futons and other bedding. 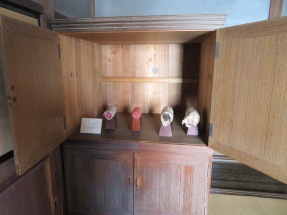 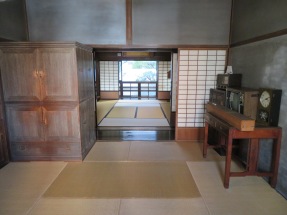 The upstairs rooms also include a spacious and well appointed room for entertaining honored guests, a smaller guest bedroom and sleeping quarters for the family that are not open to visitors.

The guest rooms all overlook the garden and the library warehouse and stone warehouse that sit at the back. 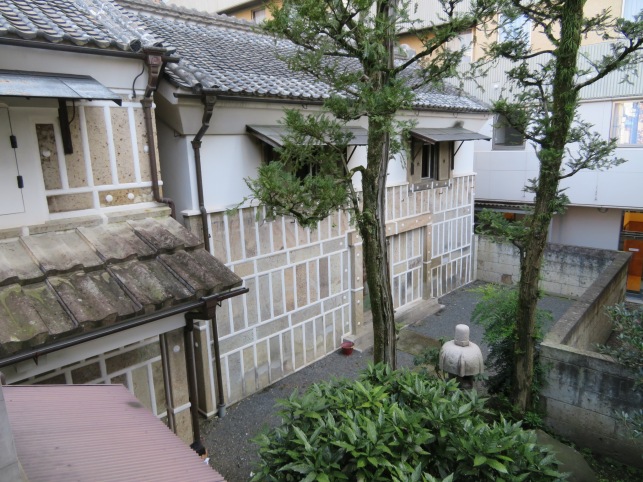 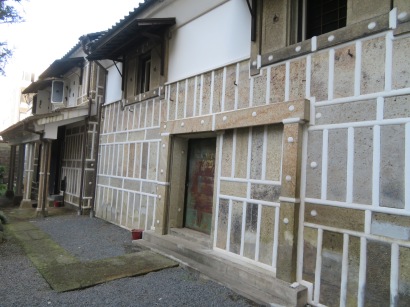 Inside the “new warehouse” was a display on the construction of this type of warehouse.  A frame of bamboo lattice allows some flexibility in case of earthquake.  This frame is covered with multiple layers of mud/clay to render it relatively fireproof.  This is then faced with slabs of Oya stone, held in place with occasional metal bars that are then concealed behind circles of the same plaster used to seal the seams between the stones. 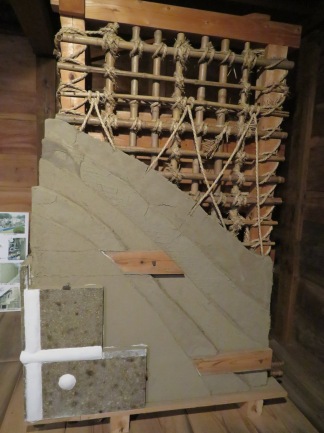 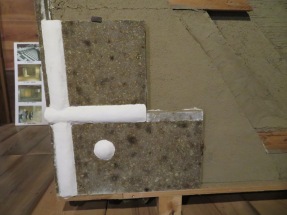 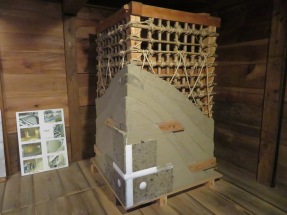 Also on display are some of the tools and implements used during the Meiji Period.  The building is in wonderful condition, perhaps partly a function of its sturdy construction. 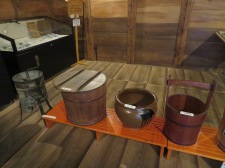 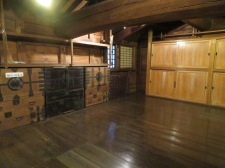 Be sure to stroll around the outside of the house itself to get a good view of its construction as well. 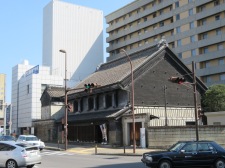 The house was designated as an important cultural property of Utsunomiya City in 1995 (its 100th anniversary) and is operated by the Utsunomiya City Board of Education, perhaps one reason why it appears to be a popular student field trip.

The Old Shinohara House is open 9:00 am to 5:00 pm, Tuesday through Sunday (open Mondays that are national holidays and closed the following day).  Admission is JPY100.

The house is just a 3 minute walk from the west exit of JR Utsunomiya Station, making it an easy place to begin a visit to Utsunomiya, or even a place to spend a bit of time while waiting to change trains.

Between the station and the Old Shinohara House is a city-operated bicycle parking garage that also rents bicycles to visitors from 8 am to 9 pm.  A rent-a-cycle from here costs just JPY100 for the day and can be returned at one of six locations across the city.  Consider using a rent-a-cycle to travel from the Old Shinohara House to the other morning destinations recommended in my recent article on Utsunomiya and Oya stone, and returning it near Tobu Utsunomiya station before catching the Oya-bound bus at Tobu-ekimae after lunch.