There are more than 40,000 shrines across Japan that are specifically dedicated to Hachiman, the guardian god of warriors. Usa Jingu in northern Oita Prefecture is widely regarded as the oldest such shrine, with all the rest mere satellites of this parent.

Hachiman is a posthumous deification of the 15th Japanese emperor, Ojin (201-312). There is a legend that Ojin was losing a battle in one of the many wars of the period and invoked the help of his ancestors, all gods (remember, Japanese emperors were, at that time, regarded as living gods). The tide of the battle turned, giving victory to Ojin, after the gods sent eight white flags fluttering down from the heavens. The Chinese characters for the name Hachiman (also pronounced Yahata) mean “eight flags”.

Usa Jingu dates to the early 8th century, some 400 years after Ojin’s death.  It is actually a complex of shrines situated along a hillside culminating in the main shrine at the summit.  The shrine ground is bounded on two sides by the Yorimo River.  Stately vermilion footbridges provide access. 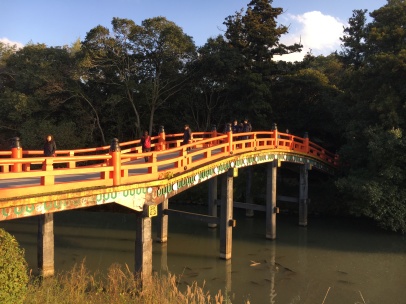 Even before visitors reach the shrine’s Grand Torii gate, they encounter the first of the shrines, Kuro-ojin-sha, a guardian of the gate. 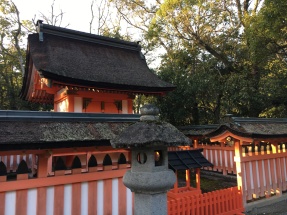 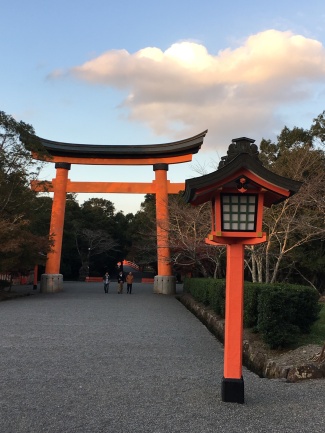 The shrine’s “Treasure House”, a museum containing artwork depicting the shrine and various objects associated with the shrine across the centuries, is situated next to a small pond on the right. (Hours: 9:00 am-4:00 pm; closed Tuesdays. Admission: JPY300) The administrative offices of the shrine are on the opposite side of the pond. As the parent shrine of more than 40,000 satellites, one imagines a good deal of administration must be necessary.

On the left hand side of the shrine approach road is Hishigata-ike, a pond dotted with islands accessed by more vermilion footbridges. A Noh stage is the principal feature of the largest island. 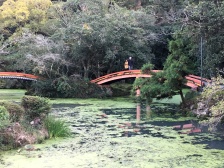 Past the ponds, the shrine ground begins to rise into a hillside woodland, albeit with wide paths for worshipers to follow.  Vermilion shrine gates and white shrine structures with vermilion accents stand out among the verdant trees. 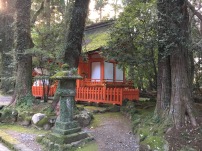 Initially the incline is gentle, leading to the lower shrine. 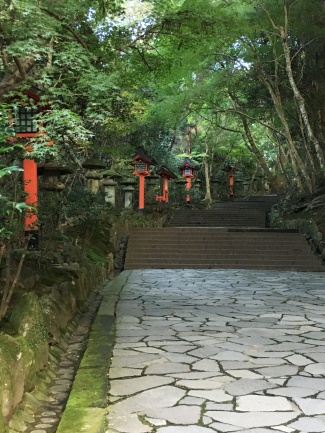 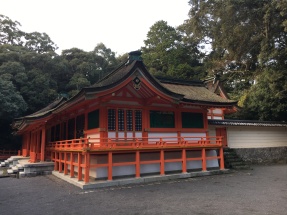 Not far on, visitors pass the Waka-Miya or young prince’s shrine, dedicated to Nintoku (290-399), the son of Ojin who followed him onto the throne.  Large Hachiman shrine complexes often have a Waka-Miya shrine on the grounds.  The Waka-Miya shrine faces the torii marking the entrance to the upper shrine. 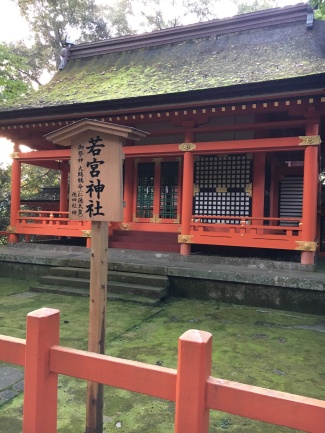 The upper shrine, a designated national treasure, is quite a spectacular site.  It also boasts a peculiar design, with an “outer” shrine said to house Hachiman during day and an “inner” shrine to which the god retires at night. 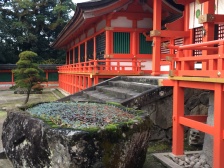 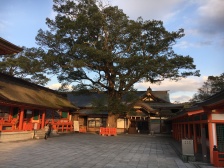 Curiously, there is also a “back” stairway leading directly away from the south side of the upper shrine. According to legend, long ago a demon asked the god if the demon could eat humans. The god replied that it would be permitted only if the demon could construct a stone staircase of one hundred steps before the following dawn. When the cock crowed the following morning, only 99 steps had been laid, so the demon’s request was denied. (Note: the existing staircase dates to the latter half of the 20th century.)

As a major religious site, there are lots of nooks and crannies to explore, with at least 11 subordinate shrine buildings, the ruins of a Buddhist temple once closely related to the shrine, and even a covered bridge as one of the shrine’s approaches.  Notwithstanding its association with the guardian god of warriors, or perhaps because of it, it is a peaceful and pleasant shrine oozing history.

One thought on “Usa Jingu: the original Hachiman shrine”