On the afternoon of February 15, 1942, Lieutenant-General Arthur Percival and members of his senior staff made their way under the Union Jack and a flag of truce from his headquarters at Singapore’s Fort Canning to the headquarters of the Japanese Imperial Army at the Ford Factory on Bukit Timah hill.  There, following a brief meeting with General Tomoyuki Yamashita attempting to negotiate surrender terms, General Percival unconditionally surrendered the British forces to the Japanese at 18:20 local Singapore time. It was the largest such surrender in history.  It was also the start of a brutal wartime occupation that would change Singapore forever. 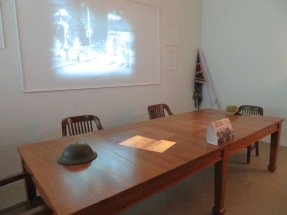 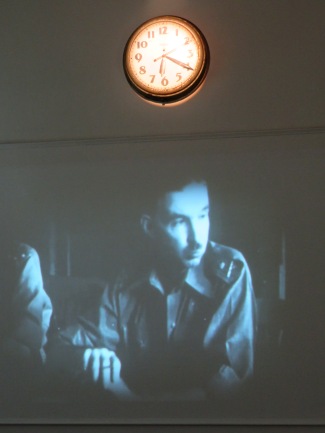 The Ford Motor Company had been doing business  in Singapore since 1926 and, in 1941, had just moved into a new, modern automobile assembly facility on Bukit Timah hill, its first such facility in southeast Asia.  The Japanese had seized the factory on February 13, 1942, during the Battle of Singapore, making it General Yamashita’s headquarters.  Just two days later, the facility’s place in history was secured by the British surrender.

Today, the former factory is a museum dedicated to the history of the Japanese occupation of Singapore and its legacies. 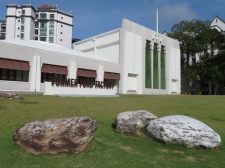 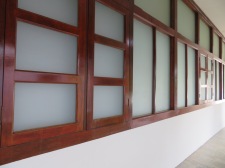 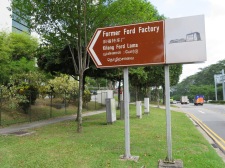 The National Archives of Singapore are located just next door.  Many of the exhibits in the museum are centered around documents from the archives.  At the same time, the exhibits also include film footage from the period and extensive oral histories to provide real eye-witness accounts of events.

To maximize the experience, be sure to download the free app: “Former Ford Factory Mobile”.  Through the app, visitors can scan QR codes throughout the museum to get further information on each exhibit as well as holographic images of key events.  These enhancements are not to be missed.  There is no wifi available at the museum, so you may want to download the app ahead of time. (If you’re really stuck and ask nicely, they may be willing to loan you a tablet during your visit.)

The lobby of the museum contains exhibits about pre-war life in colonial Singapore, noting both the opulent life of the British colonial masters and the hard manual labor of coolies loading and unloading goods trans-shipped through Singapore. A pre-war travel promotional film plays on one wall, while a table in the center of the display shows an aerial view of this section of Singapore in early 1942.  Using the app, point your device at the map to see holographic images of how the neighborhood has changed.

The first room of the museum contains displays relating to the fall of Singapore, detailing the chronology and purpose of Japan’s colonial forays into Asia during the decade prior to its surprise attack on Pearl Harbor.  It also chronicles Japan’s increasing aggression toward other Asian nations and the British response in Singapore to that aggression. 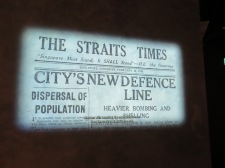 Example of a “send off banner”, frequently used by Japanese families when sending a son off to fight for the emperor

There are also displays on Japan’s late 1941 attacks on Hong Kong, Guam and Wake Island, and the Malay Peninsula, culminating in their arrival in Singapore on February 8, 1942. It acknowledges that the British defenders (including their Australian and Indian allies) were caught unawares and were, quite simply, outnumbered.

The next room to visit is the Boardroom of the former Ford Factory, which was the actual site of General Percival’s surrender.  In addition to the decor and historical items on display, the exhibit includes transcripts of radio broadcasts announcing the surrender and the Japanese expectations for civilian conduct during their occupation.  Use the app to get a holographic view of General Percival and General Yamashita sitting down together at the boardroom table. 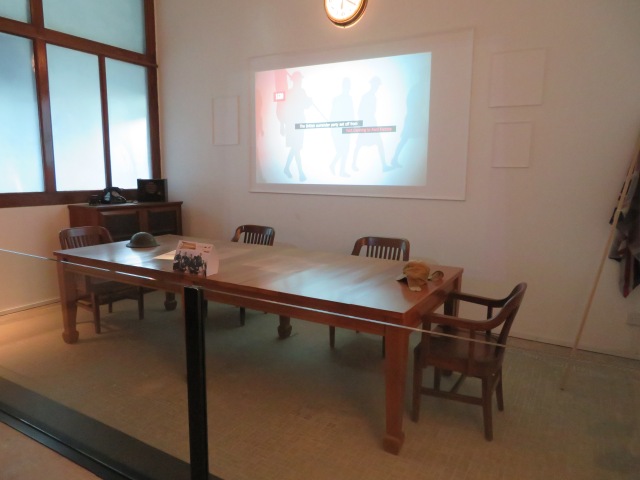 The next exhibition room is entitled “Becoming Syonan”. Syonan is the name the Japanese gave to Singapore. It means “light of the south”.  The Japanese also required that Singapore’s clocks be reset to Tokyo time (all parts of Asia occupied by the Japanese were subject to the same requirement) and that dates be rendered according to the Japanese imperial calendar (ie, 1942 became either 2602, meaning 2,602 years since Japan’s first emperor ascended to the throne, or Showa 17, the 17th year of the reign of the Emperor Showa, known in the West as Hirohito).

Various aspects of Japanese brutality toward the vanquished Singaporeans are recounted in this exhibition, some in film and through oral history.  There are also displays on life for the POWs held at the infamous Changi Prison.  The size of a single Changi cell is traced out on the floor and the app provides a holographic view. 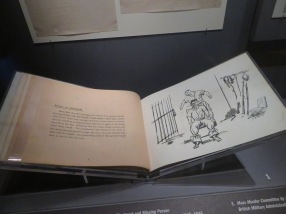 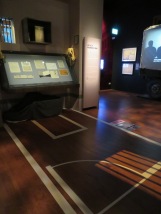 There are also documents on display chronicling every day life for every day Singaporeans during the occupation. 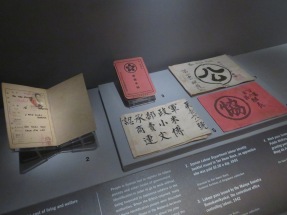 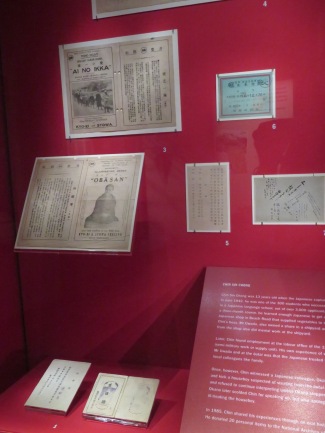 Among the particular difficulties people faced were food shortages and rampant inflation.  The Japanese were in control of the money supply, having replaced the British colonial script with their own military currency.  Because of a picture of a banana tree on the ten dollar note, the Japanese military currency was commonly referred to as “banana notes”.  Their value steadily decreased.  One display in the museum is a row of boxes showing of how much money it took to purchase basic goods during each year of the war.  What took just a few notes in the first year took an entire box of notes by the end of the war. 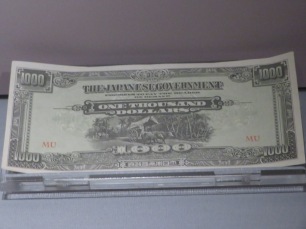 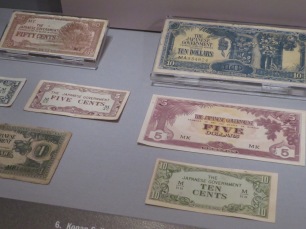 The final exhibit relating to the war years recounts the various resistance movements that emerged in Singapore as well as the final days of the war. 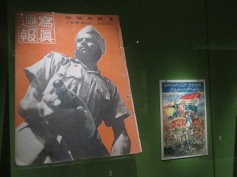 After the war, a war crimes tribunal convened in Singapore, part of the global effort to achieve justice for atrocities committed during the war.  Of the 330 trials organized by the British military across Asia, 131 trials were held in Singapore. Among the charges faced by Japanese officers soldiers were illegal killings, forced labor, various abuses of POWs, and physical abuse that did not directly result in death.

The remainder of the post-war exhibition focusses on the awakened sense of Singaporean nationalism that ultimately led to the establishment of Singapore as a national state in 1965. 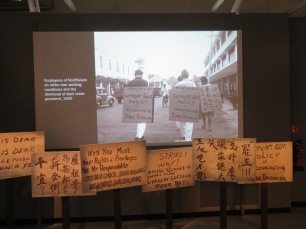 And finally there is a small display about other resources, including books on Singapore during the war years, a recording of an anti-Japanese song that was popular during the occupation, and even one of the reel-to-reel tape recorders used in the oral history project that added so much color to the museum’s exhibits. 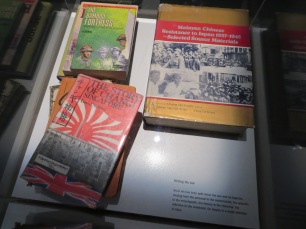 Outside at one end of the factory building is a small garden showing the kinds of plants grown by Singaporeans during the occupation and how they used them.  Besides food, many plants could be used for other purposes, such as animal fodder or tools.  When staple foods like rice, noodles, or sugar were not available, some people found ways to use tapioca and other plants as substitutes.  Even then, malnutrition was a common problem during the occupation years. 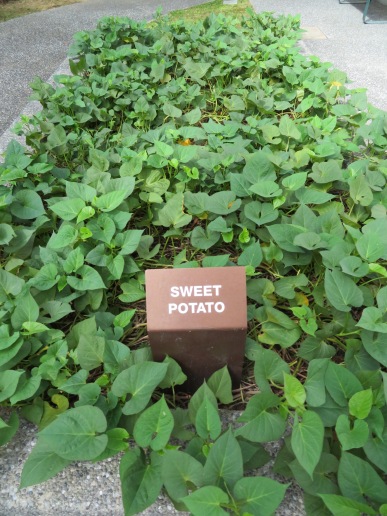 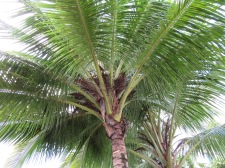 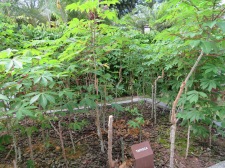 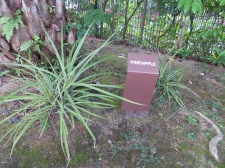 Shortly after the Japanese occupation of Singapore began, the Japanese required several hundred Australian and British POWs from Changi to engage in earthworks on the hill behind the Ford Factory.  They flattened an area at the top of the hill, built a parking lot some way down the hill, and constructed a massive concrete staircase of 121 steps between the two.  On the flattened area at the top, the Japanese constructed a 40 foot tall cenotaph-like tower which they called “Syonan Chureito” (memorial tower of the light of the south).  The completed tower was dedicated on September 10, 1942, and served as a memorial to Japan’s war dead throughout the occupation.  The Japanese even erected a small cross behind the tower in honor of fallen Allied troops.  The entire memorial was destroyed by the Japanese at the end of the war, leaving only the massive staircase, now on the boundary of a national park.  A small war memorial has been installed in the middle of the staircase.

The Former Ford Factory is open Tuesday through Sunday, 9:00 to 17:30.  Admission is S$3 for non-Singaporeans.  There are other sites across Singapore where visitors can also explore Singapore’s war-time history, including the Battle Box/Fort Canning and Fort Siloso.  But since this post is dated February 15, it seemed fitting to focus on the site of the British surrender some 78 years ago.

One thought on “Remembering Japan’s wartime occupation of Singapore”