There is something amazing and energizing about a waterfall. That is a scientifically-proven fact. The tumbling of the water generates negative ions, which research has shown to reduce depression and stress, boost the immune system and improve metabolism, among other benefits.

Volcanic Japan has innumerable waterfalls, great and small. It doesn’t take a lot of effort to find the inspiration of tumbling water.

Kyushu’s Mt. Aso volcano, just one of nine active volcanoes on Kyushu today, has been active for over 270,000 years.  Many of its largest eruptions can be credited with shaping the landscape of Kyushu as well as having global impact. The eruption of 90,000 years ago was so large that the volcano literally blew itself apart, leaving behind one of the world’s largest volcanic caldera and mountains that subsequently created rivers and waterfalls.

Join me on a visit to some of the better-known and lesser-known of Kyushu’s waterfalls. Most of these falls are included on the list of “Top 100 Waterfalls of Japan“, indicating that I’m not the only one who finds them special.

One of the most iconic of Kyushu’s waterfalls is Manai Falls, the 17 meter stream of water that tumbles into the gorge at Takachiho in Miyazaki Prefecture. Dramatic Takachiho Gorge is relatively narrow, with nearly sheer walls. The river that carved the gorge fills its floor so that one of the best ways to enjoy the gorge and the falls is by rowboat. 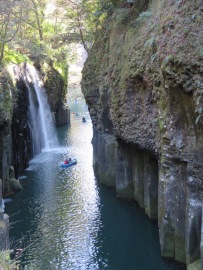 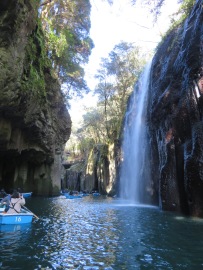 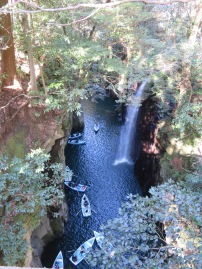 One fun aspect of a boat ride in the gorge is seeing the layers of volcanic lava flow, remnants of not only that massive eruption Mt. Aso 90,000 years ago, but also of an eruption 120,000 years ago.  I’m told that out of sight below the water level are lava layers from 140,000 years ago and 270,000 years ago. A geologist’s paradise, but pretty darn cool for the rest of us as well.

The power of water to carve narrow chasms through solid rock is truly incredible. Another, much more obscure example is Shimojo Falls on the Momiki River in Kumamoto Prefecture, due north of the Aso Caldera. 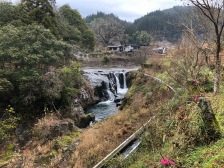 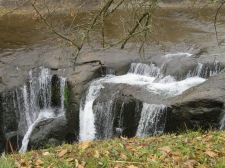 The roundness of the eroded boulders of the upper falls and the power of the water moving through a chute less than 2 meters wide at the lower part of the falls make this a great little spot to spend a little time. A small suspension bridge permits a thorough exploration.

Not far away (although I did not have time to visit) is the Nabegataki Falls, a 20 meter wide curtain of white water about 10 meters high. A cavern has eroded behind the curtain of water, which intrepid visitors can walk behind. This is probably one of the best chances to absorb those wonderful negative ions.

A popular wide falls is Harajiri Falls on the Ogata River in Oita Prefecture east of Mt. Aso. At 100 meters wide and 20 meters high, Harajiri Falls are sometimes called the Niagara of Japan.  Unlike the other falls featured above, Harajiri Falls sit in a broad open valley, a setting that perhaps makes it even more striking. 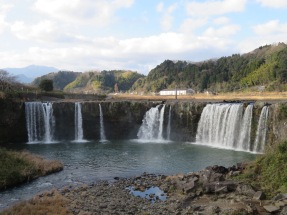 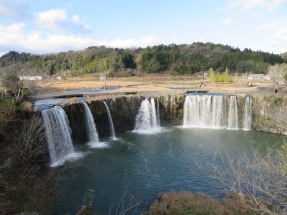 A suspension bridge across the river below the falls enables better views. Above the falls, a causeway also allows visitors to get a closer look at the volcanic rocks that created the falls.  Personally I don’t recommend that you examine them as closely as my photographer friend, Allan (I took the photo in case it would be needed for a life insurance claim after he went over; fortunately it was not).

It would be a mistake to credit Mt. Aso with all of Kyushu’s waterfalls.  In the southern part of Miyazaki Prefecture, the Sekino-o Falls were created by lava flow from the Kirishima volcanic system.  Considered one of the best waterfalls in Miyazaki, the main falls are 40 meters wide and 18 meters high, nestled in a picturesque valley on the Shonai River. 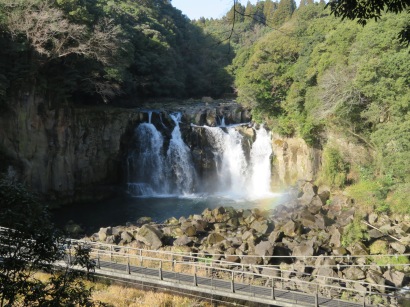 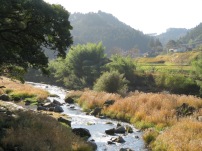 To the right of the main falls are two narrower falls that flow from an irrigation canal constructed in the early years of the 20th century, the water feeding it siphoned from the river further upstream.  Known as the male and female falls, only the male falls was being fed when I visited.

Visitors can walk alongside the irrigation canal to visit an expansive park upriver. The central feature of the park is the boulders in the Shonai River, which are actually the tops of basalt columns created when fast-moving basaltic lava fissured as it cooled. It is rare to see the columns from this angle. Stretching for 600 meters of the river above the falls, this is apparently one of the world’s largest fields of this kind of geologic formation.

The more common image of basalt columns is well displayed at Kaname Falls on the Kanome River in southern Kumamoto Prefecture, where water tumbles past the vertical columns.

I was completely alone on my visit to this 36 meter tall falls. It was such a treat to hear nothing but birdsong and the sound of the falling water.  I didn’t get close enough to the falls to absorb any of those wonderful negative ions, but still felt refreshed by my visit. 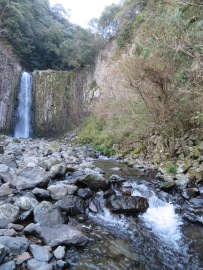 These are definitely destinations to include on your wish, for that someday when travel can resume.

One thought on “Let it wash over you: A sampling of Kyushu waterfalls”