Gunma Prefecture, some 100 kilometers north of Tokyo, has centuries of history as a silk producing area in Japan. One particular sign that you’re in an area where silkworms were once raised are the rooftops of old farm houses, that have one or more raised sections along the ridgepole of the roof, a structure that allowed for the kind of ventilation needed for silkworms to be raised in the upper section of the house.

In the late 19th century, when Japan was seeking to industrialize, silk was one of the first industries to be tapped.  Since 2014, four sites in Gunma have been included in a UNESCO World Heritage listing titled “The Tomioka Silk Mill and Related Sites”, acknowledging the importance of this silk production to the rapid development of Japan’s industrial capabilities. Although I’ve written about the sites before, I recently had the chance to take a more in-depth look. Let me share some of what I learned at just one of the sites. 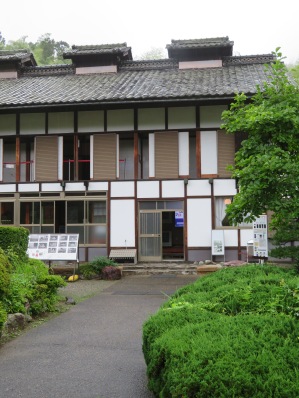 Takayama-sha was the name of a school established to provide young men with basic knowledge and specialized skill in techniques relating to breeding and raising silkworms. It is located in the village of Takayama, in a remote corner of Gunma’s Fujioka City.  The school was founded in 1873 by Takayama Chogoro, then the headman of the village, who had determined that for his poor villagers to improve their lot, they needed to take a more scientific approach to raising silkworms, an important income source.

Chogoro knew well how delicate silkworms can be, often getting sick or dying if conditions are not exactly right. Yet he was convinced that if those “right” conditions could be understood, they could also be managed to ensure a substantial survival rate.

Chogoro began monitoring the daily conditions of temperature and humidity to detect patterns in silkworm health. He soon discovered that there was a band of optimal conditions for silkworms and also realized that it was possible, even in the mid-19th century, to create those conditions, rather than simply leaving the lives of the silkworms in the fickle hands of nature. His method of proper ventilation and temperature control came to be known as seion-iku.

Chogoro also realized that larger cocoons yielded more thread and he began to focus on silkworm varieties that produced those larger cocoons, shifting production from little peanut-shaped cocoons to the rounder, plumper varieties that came to be the industry norm, increasing the amount of thread produced by a single cocoon by about 40%.

It was at this point that Chogoro decided he should share what he was learning, so he tore down his ancestral home and rebuilt it to precise specifications to create the Takayama-sha Sericulture School. Young men came from across Japan to learn seion-iku and take the methodology back home with them. Eventually the main “school” building was just the centerpiece of a substantial complex of buildings ranging from classrooms and laboratories to a storehouse for the mulberry leaves that are the principal diet of silkworms and dormitories for his students.

The entire complex sat behind a nagaya-mon (lit. long house gate) that was built as the gateway to the Takayama family home in 1687 and is still the main entrance to the site. Nagaya-mon are common farm structures, a combination barn and gate.  This one was renovated in 2017, a process that allowed researchers to learn more about 17th century building methods as well as the historical uses of this particular nagaya-mon, which has two rooms on either side of the gate.

During renovation of the nagaya-mon, footings for an experimental drying oven were found just south of the gate. Once silkworms have spun themselves into their cocoons, a process that takes about two days, they become chrysalis that will hatch into moths in less than 2 weeks unless their development is stopped somehow.  Hatching requires a hole to be made in the cocoon. If this happens, the silken thread of the cocoon is broken and cannot be used to make silk.  Drying out the cocoon kills the chrysalis and keeps the cocoon intact so that its thread can then be harvested. 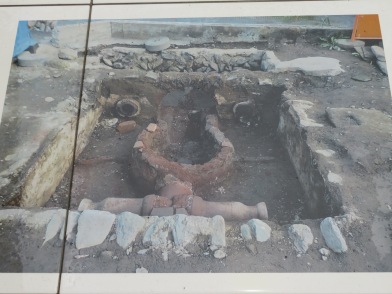 Besides the nagaya-mon, the principal building remaining at the Takayama-sha site looks like a traditional two-story farmhouse of the type commonly used for silkworm production.  In such houses, the family lives on the ground floor and the silkworms are raised upstairs. At Takayama-sha the ground floor was classrooms and offices and the silkworm raising area upstairs effectively served as laboratories. 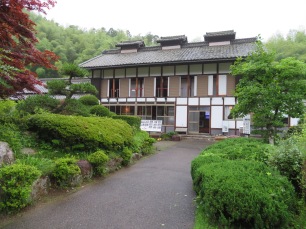 At Takayama-sha, because of Chogoro’s ongoing experiments with temperature and ventilation control, the ceiling/floor between the two levels has lots of openings above the ground floor fireplaces. These “vents” can be used to channel heat upwards from below or to ensure appropriate air flow. 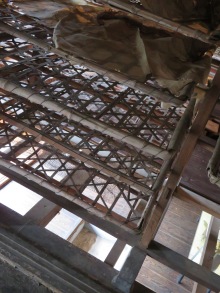 Upstairs, racks for trays of silkworms feeding on mulberry leaves sit above the floor vents, while there are hibachi heaters in the aisles for additional heat when it is needed. There are additional vents in the ceiling between the second story and the attic as well.  (There is a live video feed of the second floor playing on a screen downstairs for mobility impaired visitors who cannot manage the very steep, old steps.) 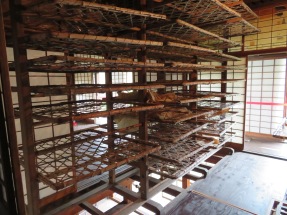 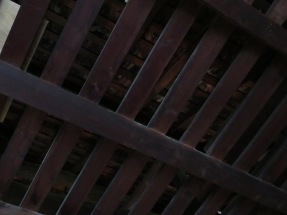 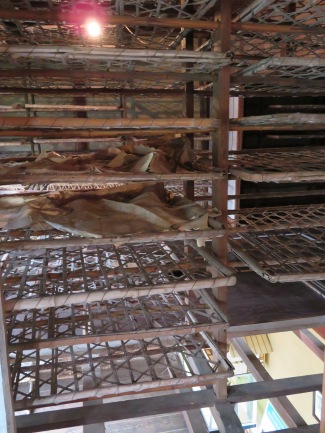 One nice feature at Takayama-sha is free wifi and a smartphone app that provides guidance in 5 languages besides Japanese.  A sign outside provides instructions, which are also available on a touchscreen panel in the lobby of the main building that also provides other information about Takayama-sha and the experimentation and education that took place here, similarly available in multiple languages.

Take some time to wander the grounds, too.  Although most of the school’s buildings no longer exist, most of the old foundations do, together with explanatory signs.  Particularly interesting is the stone lined pit that once served as storage for mulberry leaves, helping keep them fresh and juicy for the silkworms to eat. 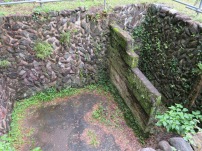 While the student’s dormitory no longer exists, their bathhouse still stands.  Look out for the cast iron bathtub–it looks more like a witch’s cauldron than a spot for a relaxing soak.

Visitors have to walk about 300 meters from the parking lot to the entrance to Takayama-sha.  There is a small visitor center nestled in a bamboo forest across the road from the parking lot with displays on silk production and silk products. Outside stands a statue of Chogoro (his grave is at a local temple on the mountainside above Takayama-sha). From the visitor center, a pleasant path leads along the creek to Takayama-sha.

I learned a lot at this “off the beaten track” site and gained an appreciation of what it took to develop Japan’s silk industry in those crucial years of the late 19th century when Japan was eager to catch up to the West technologically. The dedication paid off, as Japan was the world’s leading silk producer in the first three decades of the 20th century, with 80% of the market. One wonders if that would have been possible without learning centers like Takayama-sha.