While travellers often complain loudly about the inconvenient location of Narita Airport, Buddhist faithful who make a pilgrimage to nearby Naritasan Shinshoji, are rarely heard to do the same. The expansive and historical temple complex is one of the oldest and largest in this part of Japan. It is, of course, primarily a religious destination, but like many temples, it is also a fascinating tourist destination and is listed as a Japan Heritage site.

Naritasan Shinshoji was found in 940 AD after a 21-day o-goma prayer ritual was executed on this site, bringing an end to a civil war in the area. (For a bit more on the promulgator of the civil war, check this blog post.) To perform the ritual, a priest traveled by ship from Kyoto landing on the Boso Peninsula that comprises most of modern-day Chiba Prefecture.

The priest carried with him a statue of Fudo Myo-o carved by the great Kobo Daishi (774-835), the Buddhist priest credited with spreading Buddhism across Japan. Fudo Myo-o, whose name means “immovable”, is a wrathful deity particularly precious to Kobo Daishi who credited Fudo Myo-o with saving his life during a storm at sea in 806.

Fudo Myo-o is a contradictory being; a wrathful god known for his compassion, he converts anger into salvation. He is usually depicted holding a long, straight sword in his right hand, which he uses to cut through ignorance or danger. In his left hand he holds a rope, which he uses to catch and bind demons, including temptation. 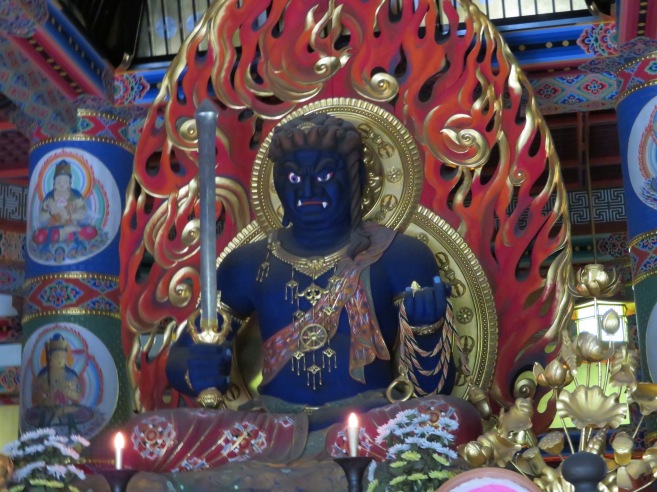 According to legend, after successfully quelling the civil war, the Fudo Myo-o lived up to his name and became immovable, refusing to be carried back to Kyoto.  Instead, Naritasan Shinshoji was established to house the statue and went on to become a major religious center and popular pilgrimage site. In the ensuing 10 centuries, many of Japan’s most famous historical figures have worshipped here.

This Fudo Myo-o is now regarded as a deity that provides business success, safe travels, family security and otherwise wards off evils. He has also become a talisman for sumo wrestlers and kabuki actors, particularly a line of actors all known as Ichikawa Danjuro.

In modern times, of course, Naritasan Shinshoji is somewhat easy to access, just a 10 minute walk from either JR Narita or Keisei Narita stations, an easy day trip from Tokyo. The road leading from the stations to the temple is, like most temple approaches, lined with shops and restaurants, making it rather picturesque, especially as the road narrows as you head downhill to the temple’s main gate. 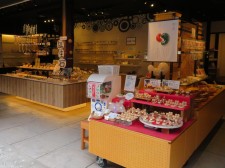 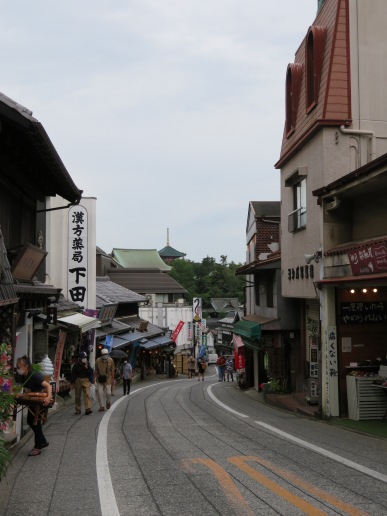 As the name “Naritasan” (Mt. Narita) implies, the temple grounds are situated on the side of a hill. Although, of course, there are no buildings extant from the temple’s beginnings, there are a number of 18th and 19th century historical structures to be seen.

Visitors begin by passing through two gates, the So-mon at street level and the Nio-mon at the top of a flight of stone steps. The main temple and its courtyard sit atop another flight of stairs. Even before you get that far there are fascinating sights to take in.

The courtyard in front of the main temple is dominated by the three-storied pagoda off to the right. The structure dates to 1712, although it has been regularly renovated and maintained to retain its colorful lacquer exterior. Nearby is a bell tower and the Issaikyo-do, a building housing a colorfully adorned rotating sutra library.

Visitors are permitted inside the massive main temple (shoes off on tatami, of course!).

Naritasan Shinshoji always has visitors but is particularly popular as a site for offering prayers at New Year’s, when it sees as many as three million visitors in three days. To handle such crowds, there are traffic flow signs everywhere around the main temple. Exit to the left (as you’re facing the altar) and look across the side courtyard for a long flight of stone steps. This will take you to Shusse Inari Shrine, where you can offer prayers for good luck and a successful career. As an Inari shrine, the color red and fox images abound here, even down to the e-ma votive plaques. Since people pray here for career success, many supplicants actually glue their business cards to the e-ma (glue is provided for that purpose). I suppose that makes it easier for the god to find them in order to answer their prayers. 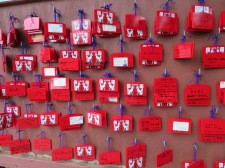 From the Inari shrine, you will get a view across the side courtyard to the remainder of the hillside above the main temple. In the distance you will see the “Great Pagoda of Peace”. 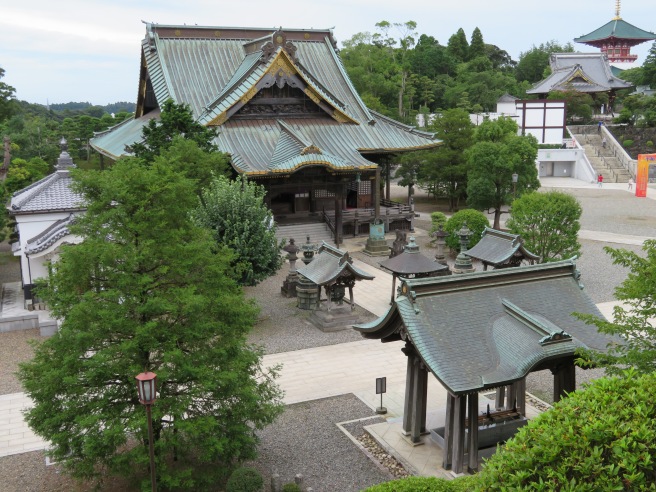 Before making your way up the hill in that direction, stop at the Shaka-do in the side courtyard.  When it was built in 1858, this was the main temple building. Be sure to take a close look around the outside, as there are wood carvings of the 500 rakan (disciples of Buddha).

The structure that served as the main temple before the Shaka-do was built is at the top of the next flight of stone stairs. Known as Komyo-do, it was built in 1701 and is the oldest major structure in the complex today. 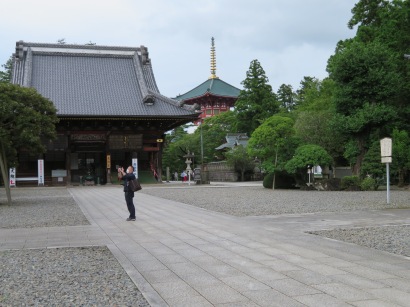 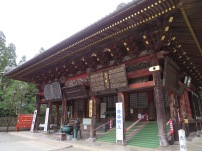 Nearby you will see Gakudo, a mid-19th century building on stilts used to house some of the temple’s antique works of art. Also in the same courtyard are Kaizan-do, a small worship hall, and a massive bronze sword of Fudo Myo-o, pointing skyward.

Finally you reach the Great Pagoda of Peace, which was built in 1984. If you’ve ever traveled by JR train between Narita Airport and Tokyo, likely you’ve noticed this structure from the train window (if not, look for it next time).

Use the entrance beneath the stairs, as there are historical exhibits in the base of the structure. Although there are no English explanations, the historical drawings are still fascinating to examine. Remove your shoes to climb the carpeted internal staircase to the awe-inspiring inner sanctuary, which is lined with murals depicting scenes in Buddhist history and dominated by a massive statue of Fudo Myo-o. 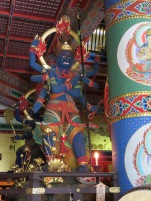 When you’re finished, be sure to visit Naritasan Park, the wooded area below the Great Pagoda of Peace. Although there is a long staircase leading to a formal, western-style garden below the great pagoda, I recommend taking one of the cobblestone trails beyond the great pagoda, as they lead to the park’s several ponds and winding trails. 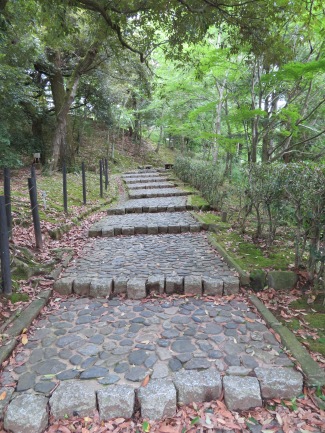 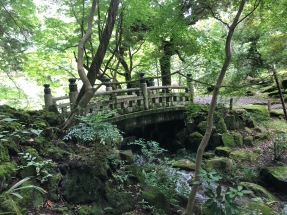 The ponds have a number of features such as gazebos and stone lanterns that make them very picturesque. They are all fed by a single water source, so are connected by a series of babbling streams. The park is quite large, with lots of well-established paths to explore. Like many such parks, the atmosphere changes seasonally, making it well worth repeat visits. 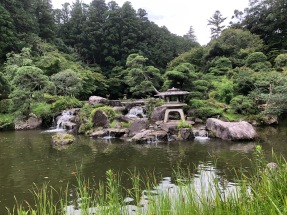 At the “top” of the park, nestled below the Komyo-do, is the water source, Yuhi Falls, a 20 meter ribbon of water, plunging straight down. You hear it long before you can see it. 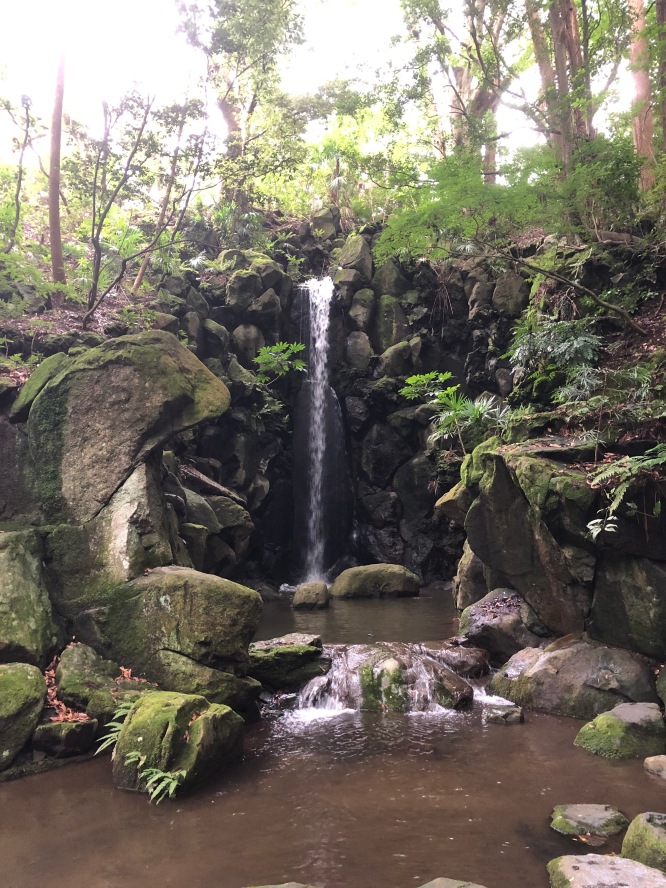 When you leave the temple to make your way back to the station, you may be feeling a bit peckish. Narita is one of several towns in this area that are known for unagi, grilled freshwater eel, and there are dozens of unagi restaurants along the road leading to/from the temple. You can even stop to watch how the unagi is prepared. 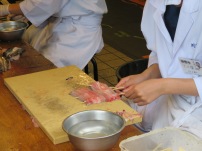 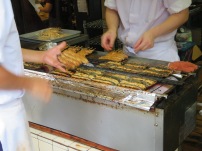 While the special day of the year for eating unagi to cool down (July 20) has passed, Narita’s unagi restaurants have banded together to sponsor an Unagi Matsuri through August 30, 2020.  They are joined by other restaurants and shops. Spend JPY1,000 at a participating shop to get one stamp (you can get up to two stamps from one establishment) and collect three stamps to enter a prize drawing. Details at the tourist information center and at participating establishments.

Or simply relax and enjoy your unagi repast and reflect on the amazing religious site you have just visited. So near a major international airport, and yet a world away.

2 thoughts on “Naritasan Shinshoji: an ancient center of worship”