In mid-March 1868, Katsu Kaishu (1823-1899), Army Minister for Tokugawa Yoshinobu, last of the Tokugawa shoguns, was returning to his home in Edo (present day Tokyo) after successfully negotiating for the peaceful surrender of Edo Castle to troops representing the new government of the Emperor Meiji (1852-1912). The negotiations had taken place at Shoto-en, on the grounds of Ikegami Honmonji temple near the Tama River, with Saigo Takamori representing the imperial government.

Katsu’s goal in the negotiation was to secure the life and property of the shogun and achieve a orderly transition of power. He knew that the shogunate was finished and felt the best thing for the nation’s future would be to give up without a fight. It took two grueling days to agree details but in the end Katsu was satisfied with the outcome he had achieved, and he was tired.

Passing near Senzoku-ike, a small pond about 3.5 km. north of Ikegami, Katsu Kaishu stopped to rest in the idyllic atmosphere surrounding the pond and thought to himself, “someday I’d like to live here”. Indeed, he eventually did make a home on the shores of the pond. He lived there, he died there, he is buried there.

Between Kaishu’s gravesite and the Ota Ward No. 6 Jr. High School (the site of Kaishu’s former home), sits a beautiful Neo-Gothic building from the 1930s that is now the Katsu Kaishu Memorial Museum. For, while Kaishu is perhaps best remembered for that fateful negotiation, he had many other historical accomplishments both before and after 1868. He was a major figure in the history of Japan’s modernization, a man who recognized history in the making and participated wisely to secure Japan’s future. An American academic who knew him personally called him “the Bismark of Japan” because of his role in unifying the country during turbulent times. 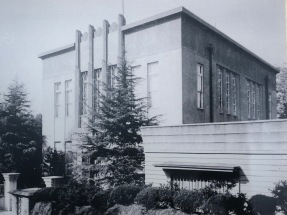 The museum building was originally built in 1933 as the Seimei Bunko Library, a research library dedicated to housing Kaishu’s body of work. The front half of the building had two floors with high ceilings. The reading room of the library was on the ground floor and a large lecture hall occupied the second floor. The back of the building held the library’s stacks. It was three stories with lower ceilings. The building was beautifully restored and re-opened as a museum in 2019.

Be sure to request an audio-guide. The English explanations provided by the audio-guide make a good supplement to the limited amount of English available at the museum, enhancing the experience.

The ground floor now contains the main exhibits about Kaishu’s life and achievements, with a special exhibition room in the former stacks area at the back of the building. Inside a circular structure in the center of the main hall is “Kaishu’s brain”, a film showing archives of Kaishu’s various writings. Around the perimeter of the hall are chronological exhibits on Kaishu’s life. Along the outside walls of the “brain” is a timeline of Kaishu’s lifespan, with significant Japan and world events on the top and significant events in Kaishu’s life on the bottom. 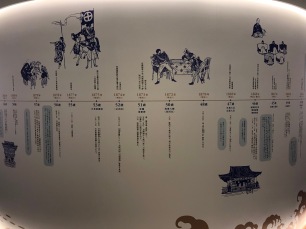 Kaishu was born in what is now Tokyo’s Sumida-ku into a family who were retainers of the Tokugawa shoguns. As a youth, he studied Dutch as the Dutch were the only Europeans trading with Japan and bring in knowledge of the outside world. He learned from the Dutch about European weaponry and tactics and even translated Dutch texts into Japanese. This earned him a role as a translator when the Americans and other European powers began to demand that Japan open itself to trade in the mid-1850s.

Around this time the Tokugawa government established the Nagasaki Naval Academy to develop a navy in response to the Western demands on Japan. Kaishu attended and added naval skills to his resume. The museum exhibits include sailing artifacts and other information from this period in Kaishu’s career.

By 1860, when a Japanese delegation was preparing to sail to San Francisco to finalize a treaty of amity and commerce with the Americans, Japan had purchased a sail/steamship of its own from the Dutch, the Kanrin-maru, which Kaishu volunteered to captain on its first trans-Pacific voyage. There is an excellent short video (available in English or Japanese) recreating the voyage in the “time room”. Apparently Kaishu himself was sick in bed for much of the journey, having developed a fever shortly before setting sail.

Through December 6, 2020, there is a special exhibition at the museum marking the 160th anniversary of this voyage and the two months that Kaishu and the delegation spent in San Francisco.

The Kanrin-maru was the first Japanese vessel to sail to a Western country and doubtless it and the Japanese travelers where the objects of much curiosity in the City by the Bay. Some sense of that comes across in the exhibition, but to a much greater extent what we see is the impressions of the travelers, thanks to Kaishu’s personal diaries. Only one of the travelers (John Manjiro) had been to the United States before.

The travelers were given tours of hospitals, government buildings, and private homes, as well as sights in the surrounding area. Kaishu’s diaries record his impressions of flooring, furniture and flush toilets (likely still a relative novelty even to Americans). He describes attempting to sleep in a bed. He also describes some of the people he meets and even his observation of a city council meeting.

Kaishu’s diaries also describe the landscape, especially San Francisco Bay, its shorelines and the rivers that flow into it. It seems likely that he showed a particular interest in maps; an American hosts gave him one as a gift, complete with personal inscription, on his departure.

Several of the travelers, including Kaishu, took advantage of San Francisco’s plentiful photography studios and had their photographs taken. Since photography was still in its infancy in Japan, doubtless the travelers saw this as a great opportunity.

After their two month sojourn, the crew and captain of the Kanrin-maru (minus three sailors who died of fever in San Francisco) returned to Japan, where Kaishu became highly influential in the navy of the Tokugawa shogunate. He even became director of the Kobe Naval School for a period. The Kanrin-maru did not fare as well as her former captain, striking a shoal and sinking off Hokkaido’s Cape Saraki in 1871.

Kaishu had seen for some time that the Tokugawa shogunate could not last, but he remained a loyal Tokugawa retainer, doing his best to give the shogunate a dignified end. And that is how he came to negotiate the surrender of Edo Castle.

Needless to say, being on the losing side, even of a bloodless surrender, left Kaishu “in the wilderness” for a time. But he was back serving the Imperial Japanese Navy by 1872 and was the government’s first Minister of the Navy from 1873 to 1878. He then served in various advisory roles in the government and was elevated to the peerage as a count in 1887. He also served on the Privy Council for a time. 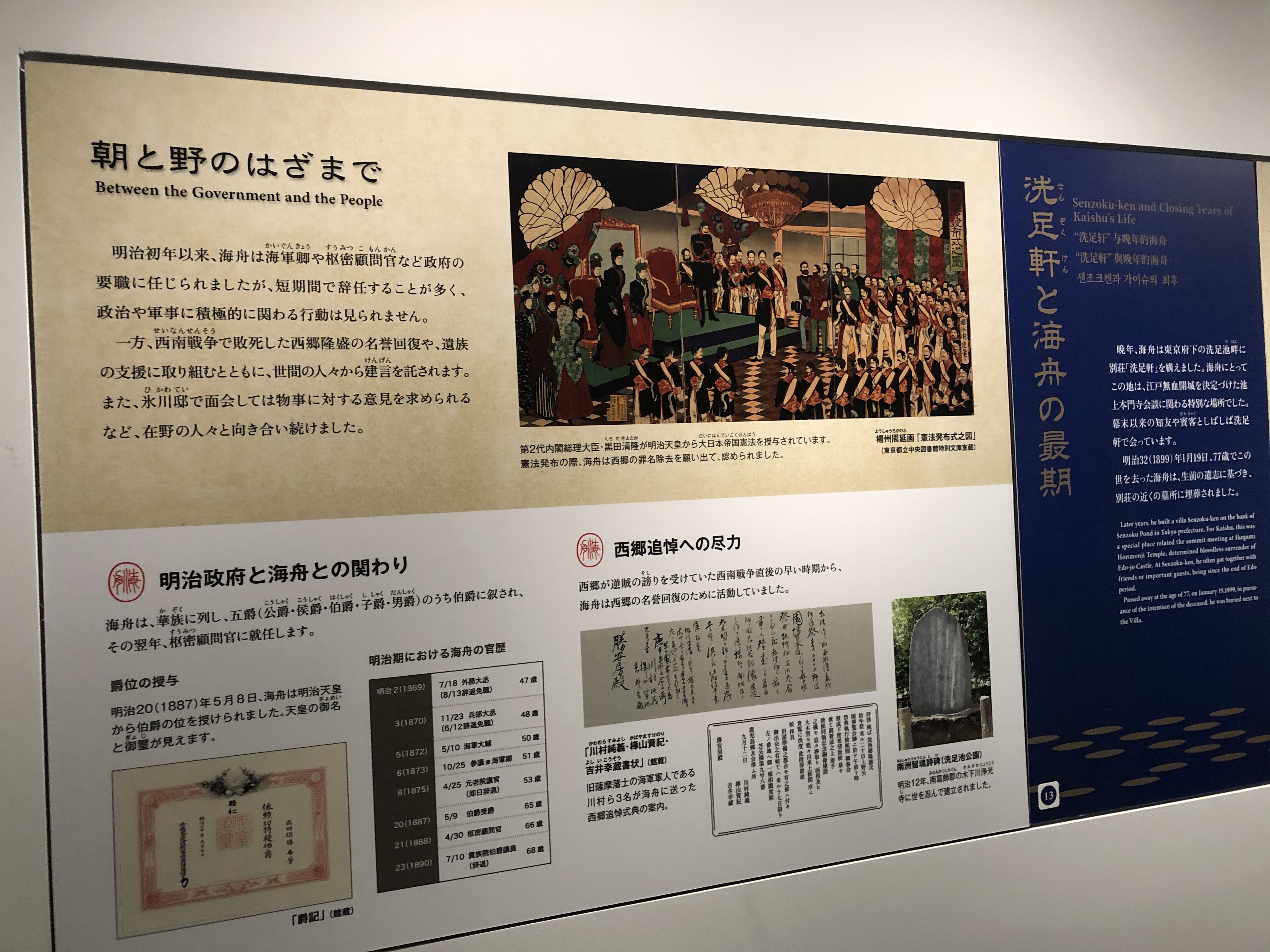 Among the museum’s exhibits demonstrating his sway over such a broad swathe of time are two of his outfits: traditional Japanese garb that he may have worn when negotiating in 1868 and formal Western attire, including gold braid signifying his rank as a count. 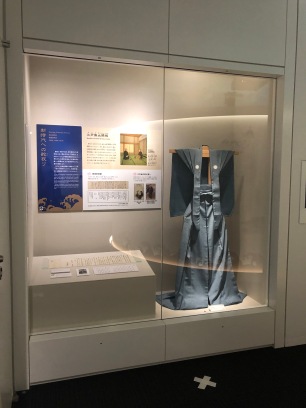 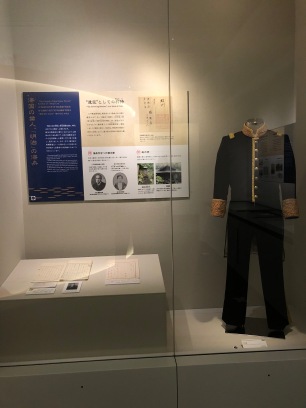 At long last, in 1891, Kaishu purchased land at Senzoku-ike and built the retirement villa he had dreamed of. A scale model is on display in the lecture hall on the second floor. He lived in his cozy villa for the remainder of his days, continuing to write and have influence to the end. 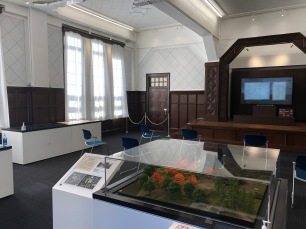 There are also films about Kaishu’s life and the time period playing on a loop on the screen behind the dais.

A particularly interesting display is Kaishu’s collection of inkan signature seals. Over his lifetime, Kaishu went by various names and it seems he had seals made for all of them. He was born Yoshikuni, but as a boy was called Rintaro. Kaishu, which literally means “ocean boat” was nickname he gave himself, based on a calligraphy painted by his brother-in-law. After the Meiji Restoration, he took the name Yasuyoshi. But Kaishu is, somehow, the name by which he is best remembered.

The seals are also replicated as decorations on the visitor lockers near the museum’s entrance. A very stylize seal bearing the name Kaishu (海舟), with “shu” (boat) stretched and curved to look like a boat and “kai” (ocean) sitting atop it looking like a sail (see nearest seal in the photo below), is almost whimsical. It is used like a bullet point on signboards throughout the museum.

The museum also has a small gift shop (what museum doesn’t?) selling various museum-branded specialty items that make distinctive souvenirs. Handy tote bags, personal water bottles, and a handkerchief printed with Kaishu’s own map of his trans-Pacific voyage quickly catch the eye. Band-aids with Meiji era pictures, in imitation of the similar “muketsu” used in the 19th century are definitely a novelty item.

Upon leaving the museum, wander back to pay your respects at Kaishu’s grave, where he is buried with his wife, Tami. By this time, having learned so much about Kaishu, you surely have respect for him! 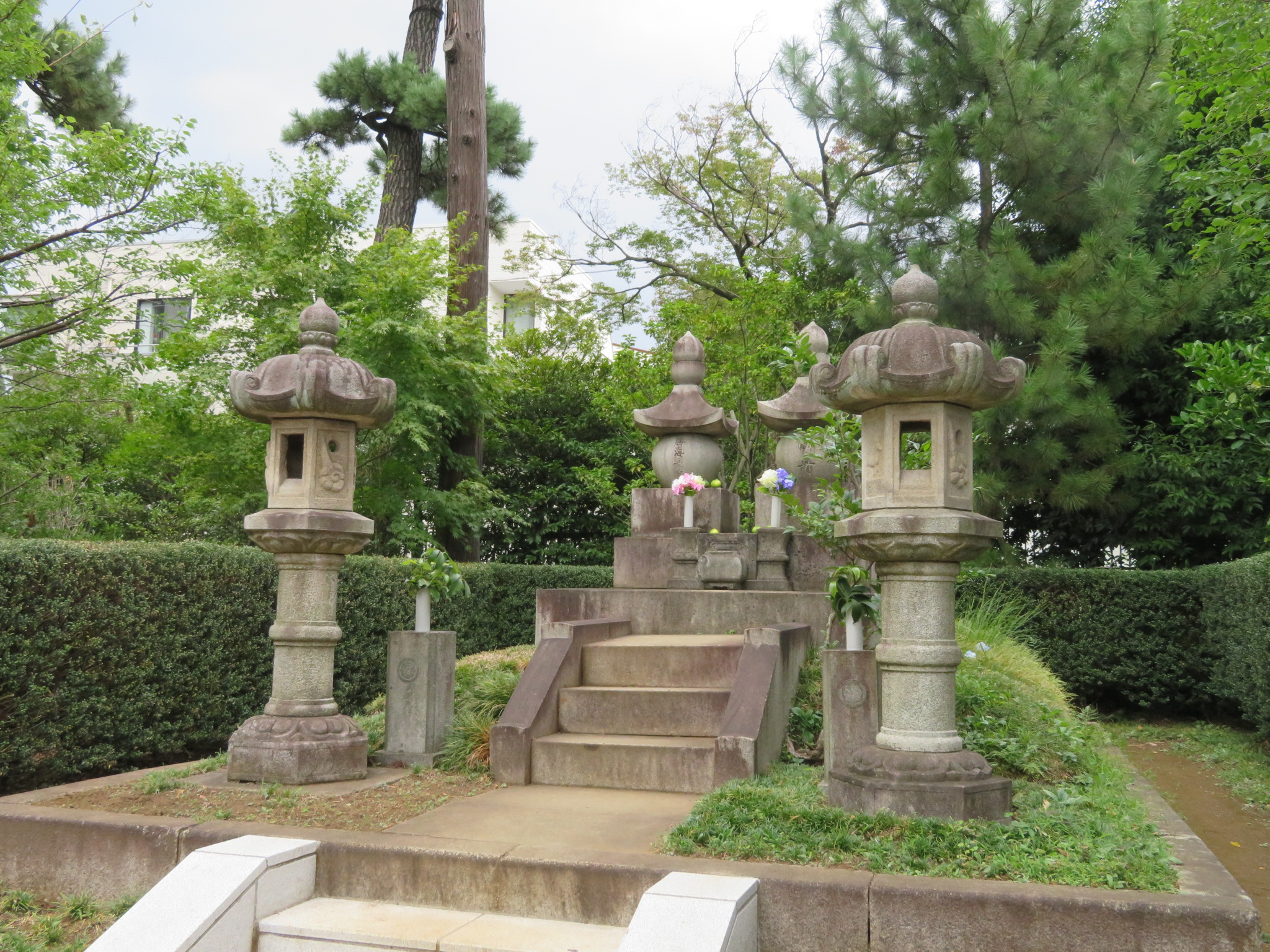 Special thanks to Koike Tatsuya (Director) and Hoshikawa Leo (Curator) of the museum for taking time with me and providing such informative explanations.

One thought on “Katsu Kaishu: living history by thinking future”