Similar to Hiroshima’s famed Atomic Dome, this hotel building has been deliberately left standing, a reminder of that fateful day. The six-story Taro Kanko Hotel was badly damaged by the tsunami waters that rose 17 meters, reaching its fourth floor. Although the lower three floors of the hotel were destroyed, the building’s frame and structural integrity are intact, so it was decided to turn it into an awareness center and memorial now known as Earthquake Heritage Taro Kanko Hotel.

In the parking lot of the hotel is a board showing how much the island of Honshu moved east/southeast during the five minutes of the 9.0M earthquake. The island was effectively stretched, so the amount of movement varied by location. Here in Taro, it was 2.13 meters. Embedded in the parking lot in front of the signboard are two metal medallions with a green arrow painted to show the direction and extent of the shift, everything confirmed with GPS positioning. Basically, the center of the white box stood on the site of the green circle before the earthqake. 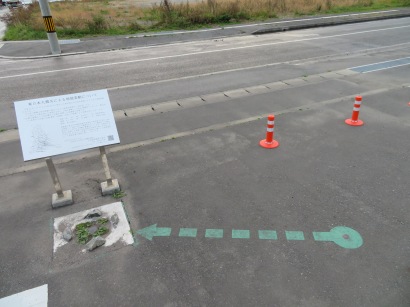 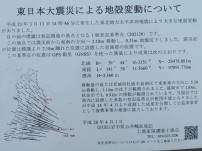 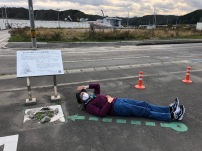 This visual reminder of the impact of the earthquake is shocking enough; with prior arrangement, it is also possible have a tour of what is left of the hotel, evidence of the damage of the tsunami that followed the earthquake. Phone 080-5739-6423 to book a one hour (JPY4,000) or two hour (JPY10,000) tour in Japanese. There are no English speaking guides available; you’ll need to bring your own interpreter, if required.

From the ground floor, the guide explains how the tsunami waters took away the outer walls, which were flexible enough to break without forcing the water to bend the building’s steel frame. The mangled elevator and the steel frame of the main staircase, which was pushed about two meters from its original position, amply demonstrate the power of the water that arrived about 45 minutes after the initial earthquake. 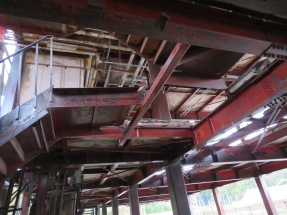 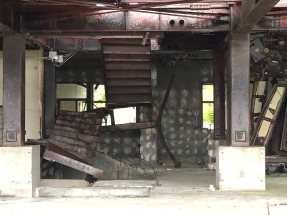 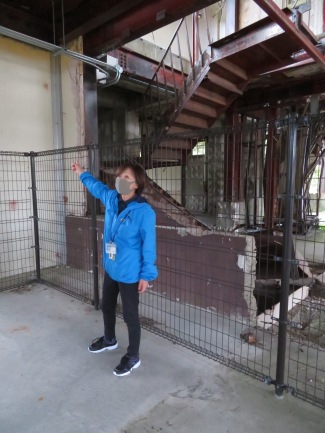 The guide then leads us up the external emergency staircase, the rails of which were badly bent by the debris in the tsunami water. (A new elevator has been specially built behind the building for use by mobility impaired visitors.)

We ascend the stairs more slowly than the tsunami waters did, all the while listening to the guide describe what happened that afternoon. The hotel was empty of guests, since it was before check-in time. The hotel staff quickly evacuated to the hills in anticipation of the tsunami that everyone knew would come after such a large earthquake. But the hotel’s owner decided to stay behind and video the tsunami from the hotel’s top floor.

When we reached that floor, we were led to the very room where the video was shot. Looking south out the windows we could see the ongoing construction of a new seawall; the old one was destroyed as the tsunami waters receded. Now there is nothing but weeds and empty streets left on the ground between the seawall and the hotel’s remains. The mouth of the bay is to the left beyond the seawall. 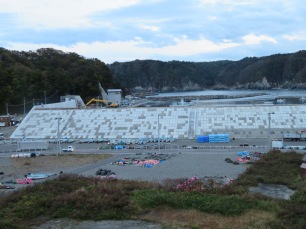 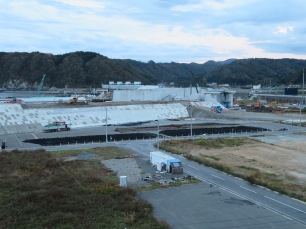 In the video, we could see a neighborhood of houses between the hotel and the seawall, a completely different scene from the one we just saw from the window. A woman emerges from one of the houses—apparently she had gone back to get her coat as it was a bitterly cold day. As she slowly moves toward the hotel and the safety of the hill behind it, the white froth of the incoming wave can be seen building at the mouth of the bay. We hear the video operator calling out to the woman below that she needs to hurry as the water is coming.

Initially the water seems to move very slowly, filling the bay from left to right. Suddenly the water is rising and spilling over the seawall faced by the hotel. Now the water is moving very quickly and soon inundates the area, rising unbelievably fast and carrying all manner of detritus. The video operator is so astonished that he panics and briefly videos the ceiling before coming to his senses and resuming his focus out the window to watch the water continue to rise. The guide told us later that by that time, he thought he was a goner.

The video is sobering, and afterward the guide tells us that the woman leaving her house in the video was never seen again, claimed by the tsunami’s waters. Altogether this little community lost 40 of its inhabitants. A serious blow.

It is heart-wrenching to watch the video, the same emotions everyone experienced when watching television footage at the time, yet more intensified by being in the precise location where the footage was shot. The incredible power and speed of the water are mind-boggling.

Afterward, our guide spoke a bit more about her own experience that day. She had a lucky escape in that she was on the site of her part-time job on a coastal sightseeing boat, preparing for the opening of the season, which was scheduled for a week later. She explained that people who live in this area know the accepted wisdom: whenever there is a major earthquake you head for the hills. Don’t stop to pick up anything. Don’t look for your family. Just seek safety and find your loved ones later. That is what she did. But that night, after the tsunami waters had receded, she headed for her home, only to find her neighborhood unrecognizable, someone else’s mangled house standing where her home should have been. Her voice filled with regret as she shared that there is a family member still missing from that fateful day. “Every 11th of the month I cannot help but think of it,” she said. “I tell myself, it’s been X years and X months. I just keep counting as time passes.”

It’s now been 9 years and 9 months…and counting. Maybe time can’t heal all wounds and remembering is the best way to cope. Another ubiquitous practice in this region is the posting of signs everywhere indicating tsunami evacuation routes and other signs marking out the 2011 tsunami’s high water points. No one is forgetting any time soon.