While Japan was fundamentally closed to the outside world during the Edo Period (1603-1868), it still maintained a robust domestic economy. This economy was largely centered on agricultural production that led to production of secondary food products all of which fed the entire nation, allowing other economic activity also to flourish.

Central to all this activity were market towns where primary produce was bought, sold and transshipped. The remnants of such activity can still be found in many river towns across the country, water transport being more common than overland transport until later in the nineteenth century..

One such market town, with some of its historical buildings still preserved, is Saga Prefecture’s Hizen Hamashuku, near the top of the Ariake Sea on the island of Kyushu. Hamashuku was not just a commercial transshipment point. It was also a post-town on the Nagasaki Kaido, one of the major roads for official or sanctioned travel during the Edo Period. It’s a very pleasant to stroll around the historical district, ducking in and out of old buildings and imagining those bygone days. Sake and soy sauce brewing were, and to some degree still are, important contributors to the town’s economy. Several brewery-related buildings still exist.

The Ariake Sea is Kyushu’s largest bay, separated from the East China Sea by the Shimabara Peninsula. The relatively shallow body of water (deepest point is only 50 meters/165 feet) has a long and productive history of fisheries and aquaculture. Much of the top of the bay has been subjected to landfill, especially in the past 100 years or so, leaving Hamashuku more than half a kilometer from the current shoreline. Its river, the Hama, is still a landing point for some of the bay’s fishing boats.

A good place to start a visit is the Hizen Hama train station. There is a friendly tourist information office and, with prior arrangement, a volunteer guide will show you around (English speaking guides very limited). The station itself is a cute little retro-looking Western-style building, built for the opening of Nagasaki Main Line in 1930. These days the station sees just a couple hundred passengers a day, except on Mondays, when the new luxury train service 36 Plus 3 stops here for an hour in the early afternoon on its way to Nagasaki.

On the right less than 50 meters down the road from the train station is Tazo Shoten, a local pickle producer. The massive warehouse is generally open for visitors to wander through, with a few samples of their pickles available. Check out the massive wooden vats where the pickles are produced, some nearly two meters tall. Some local festival gear is also stored in the warehouse and is fun to check out. 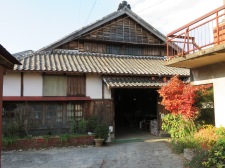 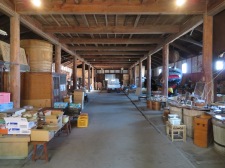 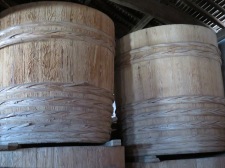 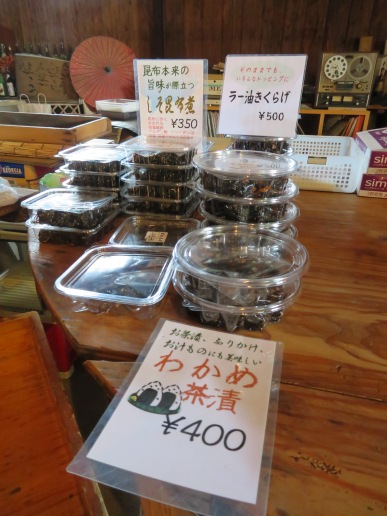 Cross highway 207 and continue on a couple dozen meters more to the elegant entrance of Fukuchiyo Shuzo, a sake brewery that produces the award-winning Nabeshima brand of sake. The shop’s front is covered in spaced wooden slats, a method of allowing in fresh eye without prying eyes back in the 19th century. One of the brewery’s traditional buildings has been converted into a tasting room with both modern and traditional elements, reminiscent of winery tasting rooms growing in popularity in Europe. Outside, a forklift jockeys pallets and crates, preparing the finished product for shipping. 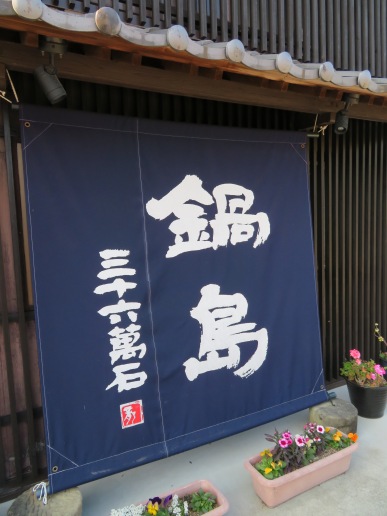 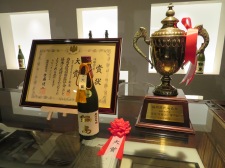 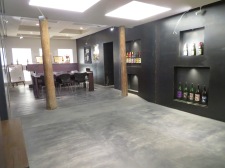 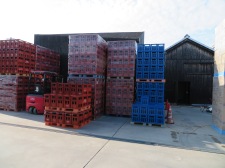 Continue on this road until it tees at Sakagura-dori (Sake Brewery Road). Ahead to the right you’ll see the Iimori sake brewery, easily spotted by its tall brick chimney. Follow the narrow walkway with the brewery on your right and a channel of swiftly flowing water on your left. The walkway leads to the back of the brewery (and the backs of several other houses) as it bends to the right. Just beyond the back of the brewery is the old Norita Residence, a two-story thatched house built in the early 19th century that was occupied by a samurai family. Yes, even market towns like Hamashuku had resident samurai. 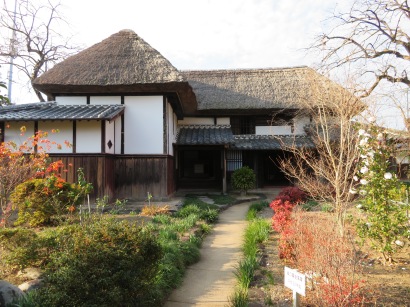 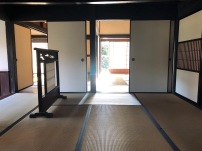 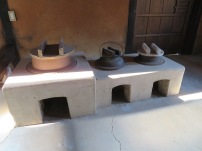 Return to Sakuragura-dori and turn right. This road is part of the old Nagasaki Kaido that ran from Nagasaki to Kokura on the Kanmon Strait at the northern end of Kyushu. This is probably the reason the road became a market and sake brewery district for the town during the Edo Period. Now it is a picturesque feature of the historical preservation district, with sake breweries, inns and shopfronts.

The two buildings in the above photo are a particularly interesting juxtaposition. The older of the two (left) is a relay station where packages for shipment were left and goods were organized for delivery. The blue building next it was Hamashuku’s first post office, built in the latter half of the nineteenth century. In a sense, the modern post office put the relay station out of business. The building is now a tourist information center; visitors are welcome to climb to the second floor where a room with a “boat bottom” ceiling served as dormitory accommodation for the runners, couriers, palanquin carriers, and rickshaw pullers who passed through the town.

The most interesting stretch of Sakagura-dori is only a couple hundred meters, but it is chock full of interesting sights. The tiled roofs of the white buildings are striking. Brick chimneys visible here and there mark out the sakagura, or sake breweries. Sake breweries are a common feature of market towns, since they can convert rice to something far more valuable to most. Soy sauce breweries served a similar function; look for one on the left a few doors down from the old post office. 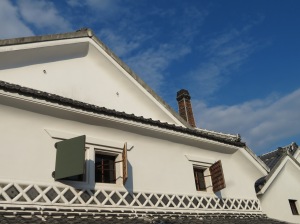 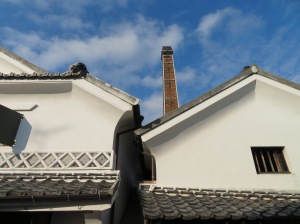 Another fun sight along the road are multiple statues of Ebisu, the god of fishermen and merchants, a perfect talisman for this port town. Of course, in this time of Covid, he is duly masked, like everyone else. 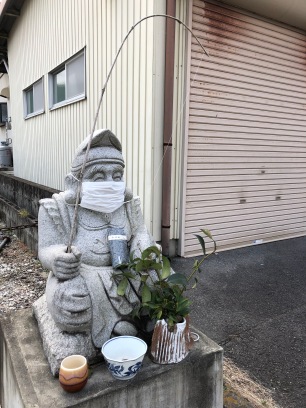 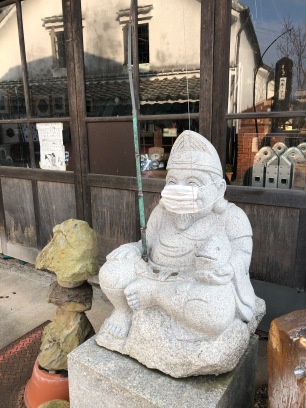 Interestingly shaped roof tiles known as “onigawara” are also fun to search out. “Oni” means ogre, and originally the tiles, in the shape of an inverted “V” to sit at the end of the roof’s ridge, were made with ogre faces, designed to ward off evil (and keep out the rain). A few of the tiles especially on display also include images of Ebisu and his fellow god, Daikoku, the god of wealth, as well as of a few ogres. 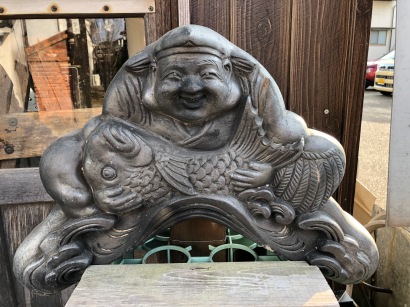 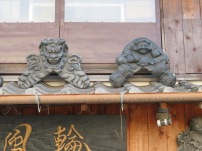 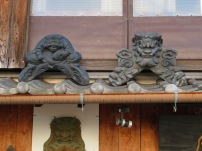 If you’ve worked up a thirst by the time you reach the end of Sakagura-dori, you’ll be happy to see Minematsu Sake Brewery, with its large showroom of regional sakes and a tasting opportunity. 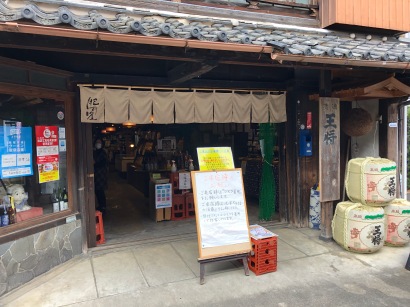 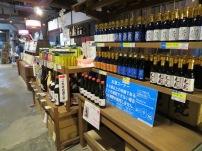 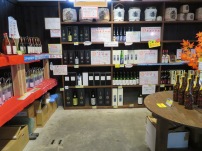 Leave Sakagura-dori by turning right onto Highway 207. Just before the river is a local fish shop featuring the best of the catch of the day. When I visited, the oyster season had just begun! 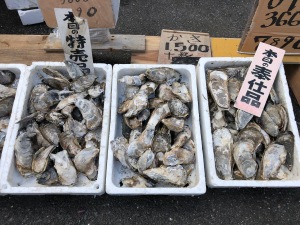 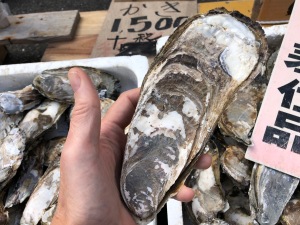 Across the Hama River, look for a staircase up the hill. Hidden by the trees at the top is a Kotohira Shrine, dedicated to Omononushi, the god of the sea. The shrine is particularly popular with seafarers, which, of course, includes fishermen. Before landfill began, this spot was the mouth of the river, where it flowed into the Ariake Sea, a logical place for a Kotohira shrine.

Indeed, it was on this other side of the river that most fishermen and other laborers made their homes. The Nagasaki Kaido and the historical preservation district continues through a neighborhood dominated by thatched roof houses, a more economical option than the fancy tiles favored by the wealthy merchants of Sakagura-dori. 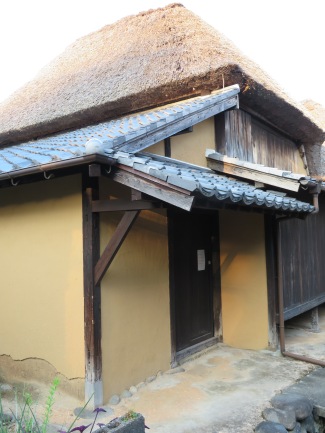 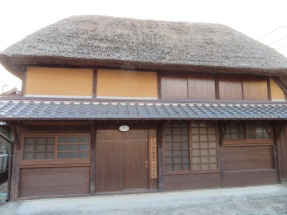 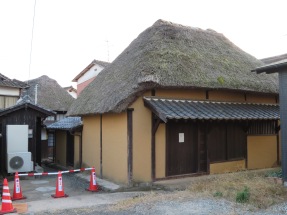 This neighborhood has a completely different personality than its mercantile counterpart across the river. Lots of narrow streets and alleyways and a more “working class” feel. In order to preserve the thatched roofs of these historical residences, there is an intricate sprinkler system as well, protection against fires which could be so devastating to a neighborhood like this.

While historic water-accessible market towns are not necessarily unusual, the nature of this town, with two distinct styles of neighborhoods on either side of the river, is somewhat different, making it definitely worth checking out.