Humans have been using imaginary lines on a map to navigate the world for over two millennia. The concept is simultaneously practical and romantic.

The same can be said of shining a light from a high place to warn sailors of unseen dangers, the magic of a lighthouse.

In Japan, 40° North latitude seems to be a particularly magical imaginary line, insofar as there are lighthouses standing on both Japan’s east and west seacoasts at this parallel.

Facing the sunrise at 40° North latitude stands the Rikuchu-Kurosaki Lighthouse, helping sailors navigate along the famous rocky cliffs of the Sanriku coast. 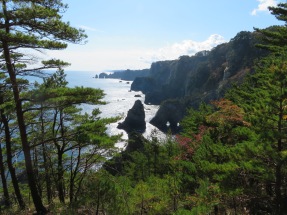 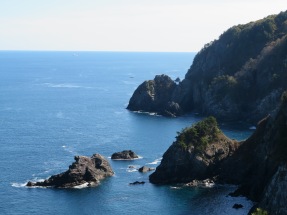 The lighthouse, built in 1947, may not look like much–it’s less than 12 meters tall–, but standing atop the cliff as it does, it is 142.85 meters above sea level and its light can be seen from a distance of 21 nautical miles (that’s about 39 kilometers for us landlubbers).

There is a small park adjacent to the lighthouse with a globe that spins, activated when visitors approach, to show off the significance of 40° North latitude, the parallel on which sits Beijing, Madrid, Philadelphia and the Kansas-Nebraska border. In the spirit of “think globally, act locally”, a tiled mosaic nearby also shows how the parallel passes through this part of Iwate Prefecture. 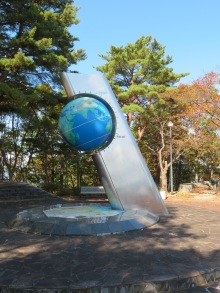 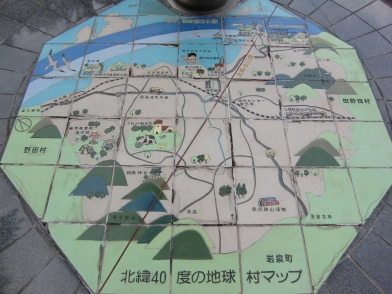 Although this spot feels quite remote, it is home to Kurosaki-so, a delightful Kokuminshukusha, those public hostelries developed in Japan in the 1960s when foreign exchange restrictions prevented Japanese nationals from traveling overseas. The facility feels quite retro–thanks to its advanced age–, but it is well maintained, serves great food and has a nice hot springs bath. If you get the right room, the ocean views at night can be quite soothing.

There are lots of good hikes in this area, including a segment of the Michinoku Coastal Trail.

Curiously, the local fishermen like to use Kurosaki-so’s parking lot in the late afternoon to mend their nets. Kurosaki Fishing Port is less than 10 minutes ‘ drive to the north. 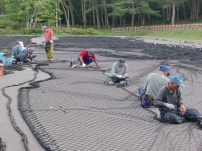 Follow the sun across to the west coast at 40° North and there stands another lighthouse, this one at Cape Nyudo on the northern tip of Akita’s Oga Peninsula. There has been a lighthouse on this spot since 1898, although the current structure was built in 1951.

The black and white stripes of the 28 meter tower seem almost whimsical in the bright sunlight. During the summer months, visitors can climb to the top between 9:00 and 16:00 for a small fee.

At night, the light, 57 meters above sea level, can be seen from up to 20 nautical miles (about 37 kilometers) away by ships in the Japan Sea.

The coastline of Cape Nyudo doesn’t have dramatic cliffs like those of the Sanriku coast, but it’s rocky enough. And given how long there has been a lighthouse here, plenty of mariners must have come to grief on these shores before the lighthouse was built.

Cape Nyudo is also proud of its position at 40° North–stone monuments and markers show off the line. 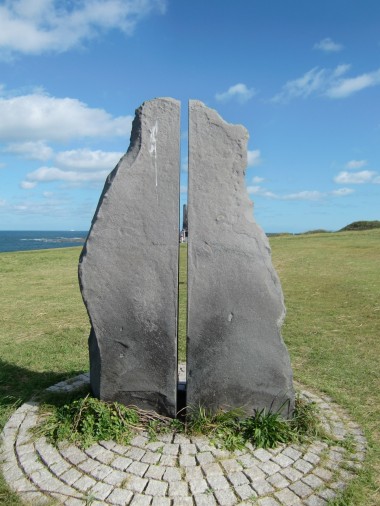 The Oga Peninsula is otherwise best known for its legend of Namahage demons who come for children who misbehave. Some local inns arrange drum performances by local troupes in the evenings, another special feature of the area.

Maybe there is some magic to 40° North after all.

© 2021 Jigsaw-japan.com and Vicki L. Beyer
We’re thrilled if you share this; if you want to re-use in any other way, please request permission