Waterfalls are well known to release negative ions that boost the spirits of mere mortals who visit them. Japan is blessed with many waterfalls and so lots of negative ion opportunities. One unusually shaped waterfall worth seeking out is Fukiware Falls in northern Gunma Prefecture (almost halfway between Minakami and Nikko).

The falls is in a gorge on the Katsushina River, where the river is wide and shallow, flowing over tuff (compressed volcanic ash) that has been eroded by the river’s flow but has not yielded to it, except at the fissure known as Fukiware Falls.

At the falls the river’s water has carved narrow a 7-meter deep fissure that is about 30 meters long. While the bulk of the river flows into the end point of the fissure, the width of the river ensures that some water slides of the rim of the fissure for its entire length. While not as large as Victoria Falls on the Zambezi River, the mysterious sense of the disappearing water must be similar. It is certainly not the usual open-faced waterfall.

To better allow visitors to enjoy the gorge, the river, the falls and all those wonderful negative ions, there is a circuit path (up one side of the river and down the other) that takes about an hour of easy walking. The path upriver is on the water’s edge while the downriver route is a forest path.

The walk begins, almost predictably, with a gauntlet of souvenir shops featuring local specialties. But the vendors know better than to engage in hard sell, and the tall trees of the riverside beckon. 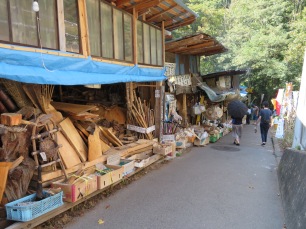 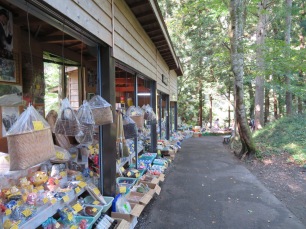 The path reaches the riverbank at a waterfall known as Masu-tobi (Leaping Trout) Falls. Here the water plunges 15 meters through a narrow fissure as the gorge narrows. The name derives from the fact that trout trying to swim upstream to spawn jump and jump but most cannot manage to make their way any further upstream–the falls stops them. 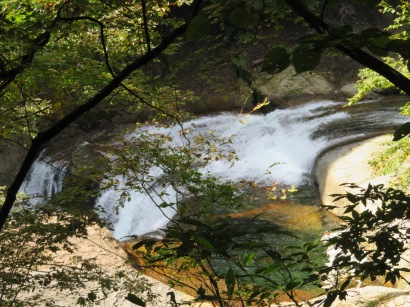 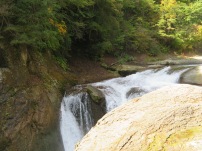 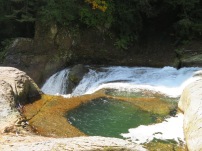 A concrete “catwalk” leads upstream and around a major boulder. 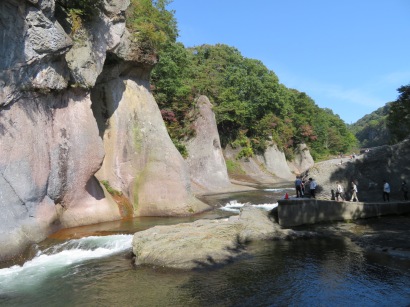 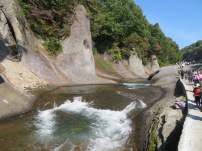 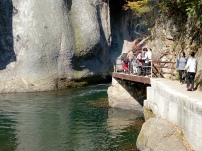 The opposite side of the river is sheer rock, worn smooth in places by wind and water. Someone creative spotted a jutting bit of boulder that resembles the face of a legendary female demon known as Hannya, famously jealous and sporting the gaping maw and horns to prove it. 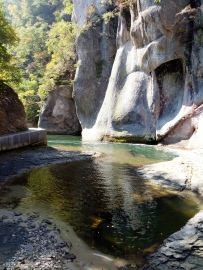 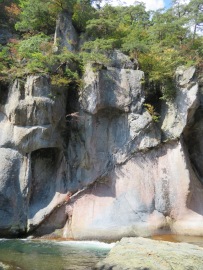 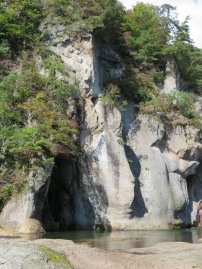 Already the flowing river and the greenery are imbuing the air with the positivity that negative ions provide and after rounding one of those boulders that seems to be blocking the way (but isn’t), the gorge opens up and Fukiware Falls lies ahead.

The shallow water mesmerizingly sheets over the tuff stone riverbed and then tumbles into the crevasse from all sides (except the bottom, of course). 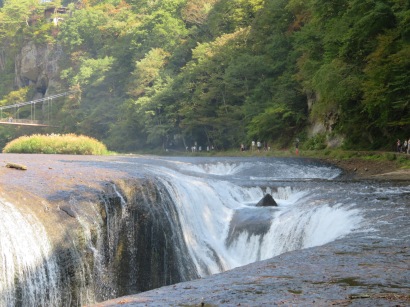 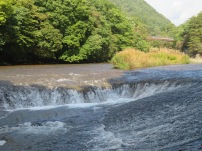 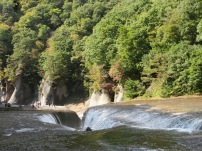 There is an local legend that this crevasse conceals the entrance to a dragon’s lair known as Ryugu. In ancient times, villagers would borrow dishes needed for festivals from the dragon. They would write a note specifying the number of dishes required and drop it into the river upstream from the falls. The next day, the requisite number of dishes would be on the riverbank. The villagers would return the dishes to the same spot three days later with a message of thanks. One time, a dish was left behind when the other dishes were returned. The dragon noticed the oversight and refused to lend out the Ryugu dishes ever again.

A stretch of the wide river above the falls is so shallow that for most of the year lots of rock is exposed. It is known as the “thousand tatami”. 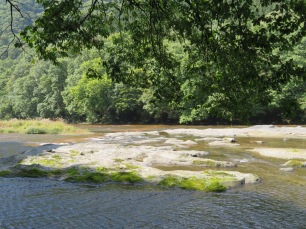 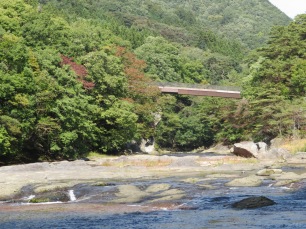 The island is home to the Ukishima Kannon, believed to have been carved by seventeenth century master woodcarver, Jingoro Hidari, best known for his work on the Nikko Toshogu shrine, including the famous nemuri neko (sleeping cat). Jingoro is said to have passed through the Fukiware area many times on his way to and from Nikko and supposely carved the Kannon on one of these trips, around 1640. The statue was originally raw wood, but a patron in Maebashi had it gilded at the end of the nineteenth century. In fact, the Kannon stayed in Maebashi for nearly a century and was not returned to Ukishima until 1990, when the suspension bridges were opened.

Viewing the river from the suspension bridge, one would never guess at the waterfalls that lie just 150 meters downriver. 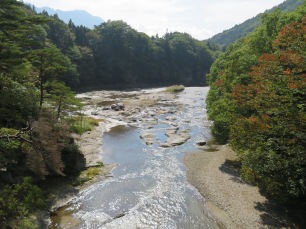 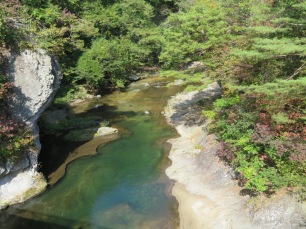 From the river’s right bank, there is a staircase leading to the forest trail downriver, with all the negative ions emitted by greenery. Don’t miss the lookout at about the halfway point, which provides more of a bird’s eye view of Fukiware Falls and the entrance to the dragon’s lair.

Fukiware Falls is about a 40 minute bus ride from JR Numata station or about 20 minutes by car from the Numata interchange on the Kan-etsu expressway.

© 2022 Jigsaw-japan.com and Vicki L. Beyer
We’re thrilled if you share this link; if you want to re-use in any other way, please request permission.