November 20, 2016, was the culmination of a 3 week long promotion of Tohoku products at the Toranomon Hills complex in the area becoming known as “Shintora” (combining the names of the Shinbashi and Toranomon districts of Tokyo).  The absolute highlight of the day was the Shintora Matsuri Parade, featuring troupes from the six major festivals of the Tohoku region, the so-called “Rokkon”.  For the past 6 years–since the Tohoku triple disaster–, these six festivals, each with centuries of history, combined efforts, hosted by a different city each year (Sendai in 2011, Morioka in 2012, Fukushima in 2013, Yamagata in 2014, Akita in 2015, and Aomori in 2016).  The Shintora Matsuri Parade provided a small sample of the spectacle. 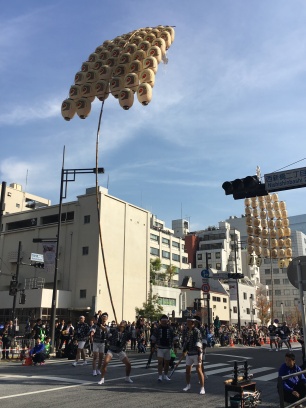 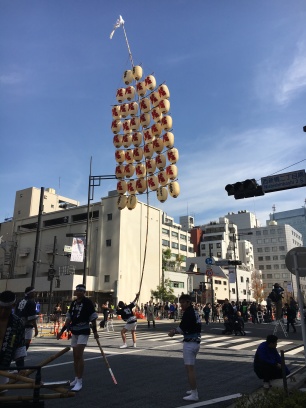 The central feature of the Akita Kanto Festival are performances balancing and manipulating the “kanto” bamboo frames and lanterns.  The teams handling the kanto kept adding more lengths of bamboo, lifting the frames higher and higher, and then took turns holding and balancing it. 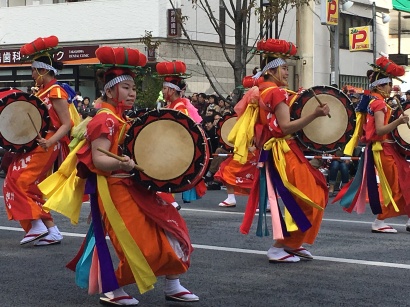 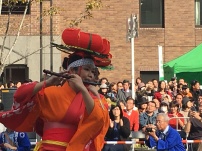 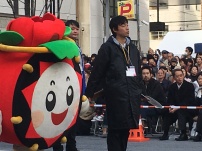 The Morioka Sansa Odori is a dance in colorful custumes with the accompaniment of serious drums and fifes, an historic celebration of local people managing to rid themselves of an ogre.  No, that little guy in the lower right hand corner is not the ogre; he’s Sakkochan, the festival’s mascot. 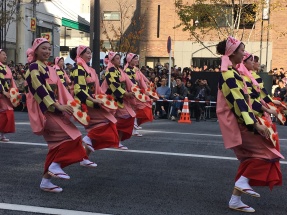 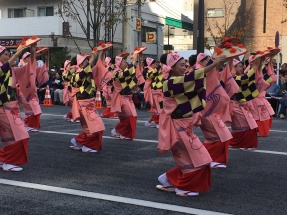 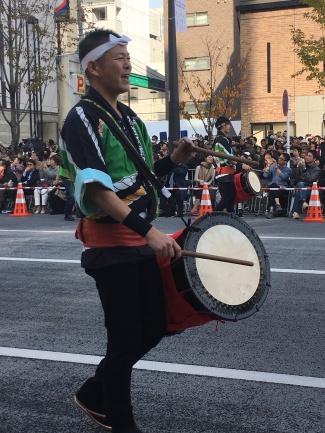 Next up was the synchronized dancing of the Yamagata Hanagasa Matsuri.  Hanagasa is the flower-covered straw hats used as props by the dancers.  This festival is a mere baby compared to the others.  It only dates back to 1964. 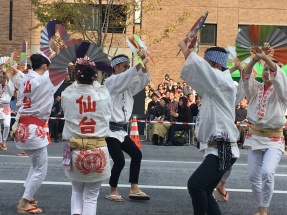 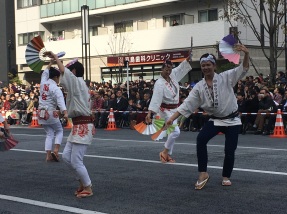 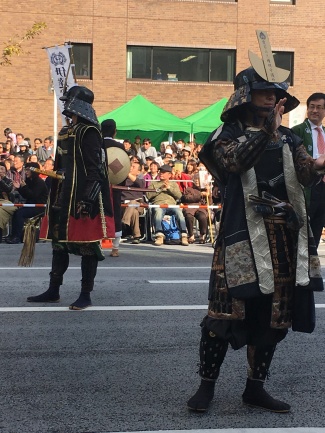 Sendai’s Tanabata Festival is one of the largest celebrations of Tanabata in Japan.  For this parade, dancers performed the Suzume Odori, or bird dance, using fluttering fans to emulate wings as they danced in circles as small groups.  Also on parade were men in traditional samurai garb, including one representing Data Masamune, Sendai’s own, and one of the greatest military strongmen of the Warring States Period (1467-1603). 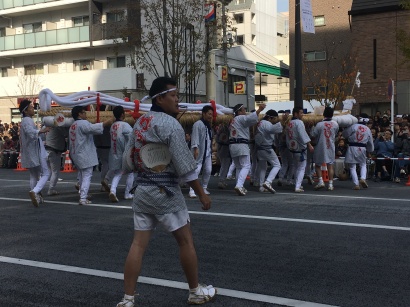 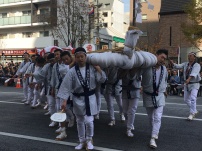 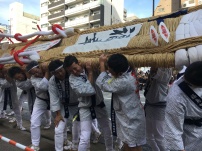 The central feature of the Fukushima Waraji Matsuri is a giant straw sandal or waraji, of the kind worn by travelers in olden times.  As an effigy, it is meant to signal safe travels.  For today’s parade, a “medium” sized sandal was used:  only 7 meters long.  In the actual festival the featured waraji is 12 meters long and weighs 12 tons.  The manipulations performed on this one were spectacular enough; I can’t imagine what the larger one must be like! 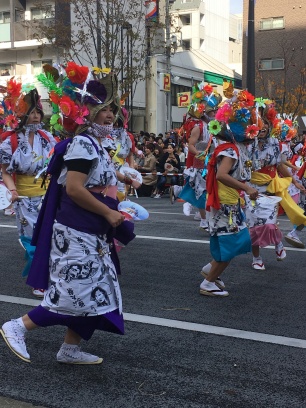 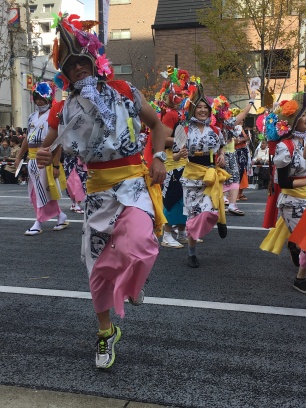 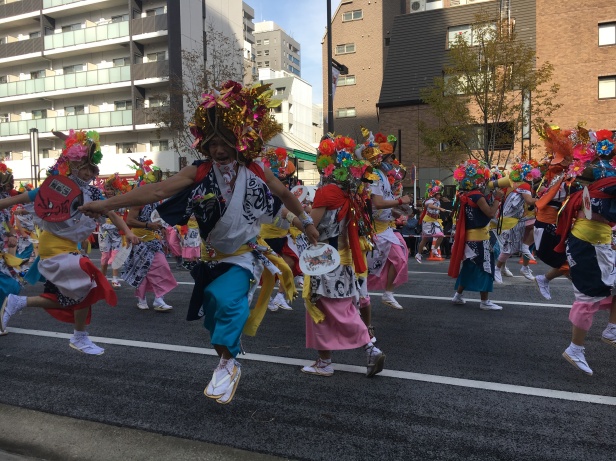 By far the most raucous dancing was that of the good people of Aomori, representing the Aomori Nebuta Festival.  Wearing their bizarre and colorful “haneto” costumes and shouting “rassera”, they were absolutely jubilant in their dancing.  If the little bells attached to their costume fall off and are recovered by anyone, that person is guaranteed a year of good luck.  I got two! 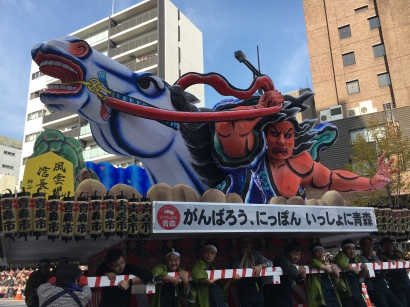 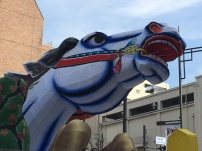 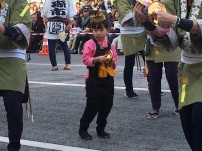 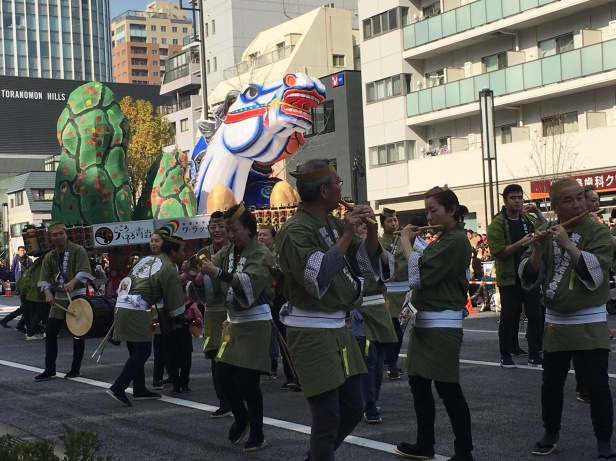 Finally we were graced with a single Aomori Nebuta float.  It was magnificant and it was easy to see why the dancers were so enthusiastic.

This parade really made me want to see the actual festivals in their hometowns.  Unfortunately, many of them are scheduled for the same time, so it may take me years to accomplish this.  (Maybe that’s why they combined efforts for the past few years…)

The traditional festival dates are:

One thought on “Shintora Matsuri Parade: bringing Tohoku to Tokyo”