A couple of weeks ago, I got an email from my friend Maki:  “We’re spending our vacation at our week-ender in Izu.  Come down for a couple of days.  We’ll go eel fishing!”

I love hanging out with Maki and readily accepted her invitation.  I was especially intrigued by the suggestion of eel fishing.

While Maki had never mentioned fishing before and didn’t strike me as the fishing type, I know fishing is popular in Japan.  Many friends and colleagues over the years have mentioned going fishing to me.  So even if Maki didn’t seem the type, it wasn’t impossible to believe that she enjoyed fishing.

There is a popular series of Japanese movies: “Diary of a Fishing Fool” (Tsuru Baka Nisshi), starring Nishida Toshiyuki, that also reflect the popularity of fishing as a past-time.  Each of these movies (there are more than a dozen) focuses on fishing in a different place in Japan for a different type of fish.  I’ve seen a few, but if there was one on eel fishing, I missed it.  In other words, I had no idea what eel fishing might involve.

The first thing Maki asked when she picked me up at the station was “Have you been fishing before?”

“So you know how to fish then.  Good!”, came Maki’s blithe response.

This is also when she confessed that she’d never really been fishing before herself.  Apparently, not long ago, she saw a sign at the pond in a park near her house, saying that the pond had been stocked with several kinds of fish and that people were welcome to fish there.  She had gone to a 100 yen store and picked up a cheap little fishing pole to try her luck.  And she was lucky enough to catch a fish, which made her want to try fishing more seriously.

So she’d gone to the local tackle shop to pick up a rod and reel and a few other bits and pieces.  She’d also dug a bunch of night crawlers from her garden.

She then proceeded to tell me that she’d read a bit on eel fishing and learned that it’s best in the tidal reaches of a river, right on sundown.  She had in mind a fishing spot, but wanted to stop by the tackle shop once more on the way, just to pick up a few more things.

I use the term “tackle shop” loosely.  Such establishments in Japan are department store large, offering all manner of fishing-related goods.  The one we stopped at was no exception.  There were tanks of live bait, fishing boats and life vests as we walked in the door, and then aisle upon aisle of rods, reels, line, hooks, bobbers, nets–everything one could imagine needing for a successful fishing expedition. 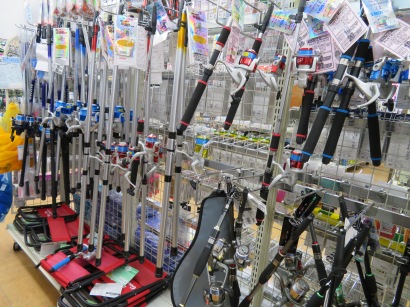 Maki explained our needs to the attendant and asked for his advice about the best spot to fish.  He refused to be drawn out on the subject of fishing holes, but did offer some pointers on rods and reels.  While he was fixing up our reels for us, Maki spoke to a different attendant, who gave us advice about suitable hooks for eel fishing and the best way to bait the hook.  He even confirmed that the general area of the river we proposed to fish–just upriver from Numazu’s fishing port–looked good.

Once Maki was satisfied that we had everything we needed, we were off.  We found what looked like a nice spot on the river, hauled in our gear and set ourselves up.

It had been years since I’d baited a hook, but I guess it’s not something one forgets how to do.  The guy at the store had advised leaving about half the worm trailing off the hook, so that’s what we did.

We soon realized that the sinkers attached to the specialty hooks for eel fishing are quite heavy, making it impossible to cast out very far.  (Still not sure why that is…)  But we did our best to get our lines into the water, and we waited.  And we waited.

It was a beautiful evening, calm and still.  Before it got too dark, we could see the tide coming in on the river.  And occasionally we saw small bats flying overhead.

But the river itself was quiet.  Nothing was biting, not even the mosquitoes.

We periodically checked that our bait was still on the hook (Maki’s got stolen once, which made us hopeful that there was something biting in the river) and then cast back out again.

After two hours, we gave up.

I think I was secretly relieved, because I couldn’t imagine what we were going to do with a slippery eel if we caught one.  I certainly didn’t want to have to try to hold it still enough to get the hook out (Maki said she’d been told the best way was to just cut the line and leave the hook in), nor did I relish the idea of trying to kill and clean an eel, although I’ve seen it done at Tokyo’s Tsukiji Fish Market.

Back at home we did a bit more Internet research and learned that while eels do go for worms, they like “bloody” bait, like calf’s liver, best, and that it’s a good idea to throw a little bit into the river to attract them before even casting your line in.  We also got the impression that we might have been just a little too far upstream, and should have been even closer to the mouth of the river.

One site we looked at suggested tucking a bit of bloody bait into the toe of pantyhose and dropping them in the water (secured to a line, of course) as a sort-of fish trap.  Like other fish traps, once the eel goes in for the bait, it can’t back up to get out again.  We were especially intrigued by that!

We considered trying again the next night–maybe even with some old pantyhose–but after spending the day sightseeing in the area, including a visit to Numazu’s fish market, we decided we’d had enough. 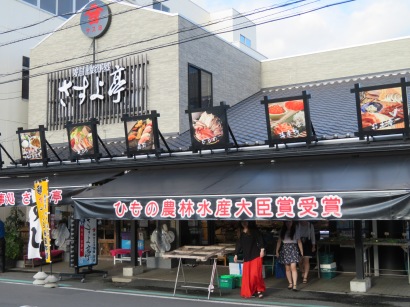 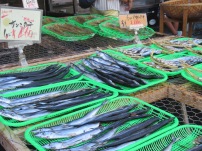 Besides, Maki had bought a braised tuna head at the fish market, a treat she regarded as even better than fresh eel.  I’ve never eaten freshly caught eel, but the tuna head made  quite a tasty meal, and I really didn’t mind that we weren’t eating our own catch.