Pirates!  These days the word evokes various images from Captain Hook and Long John Silver to Johnny Depp and Captain Phillips.  Asia, too, has its pirates, both ancient and modern. Since September 19 is “International Talk Like A Pirate Day”, this seems a good time to talk about pirates in Japan.  Oh yes!  Japan has also had pirates in its day.

Known as “wako” in Japanese (from the Chinese “wokou”, literally meaning “little bandits”), the pirates were most active in the 14th to 17th centuries.  The word was, however, first used in the 5th century to refer to ship-borne marauders up and down the coastline of continental Asia who tended to hole up in small islands off the western coast of Kyushu but eventually reaching the southern and eastern coasts of Honshu as well.  While the existence of these pirates is well known, there is controversy over whether they were actually Japanese or whether they were of other Asian ethnicities and just happened to use the Japanese coast as their base of operations.  The accepted wisdom appears to be that they were only about 30% Japanese and were in Japan largely because it was a handy place to hide out.  (For perspective, keep in mind that only 200 km. separates Korea from Kyushu and Nagasaki is about as close to Shanghai as it is to Osaka.)

During the Heian Period of Japanese history (794-1185) there were also pirates who were active throughout the Seto Inland Sea area, often holing up on the tip of the Kii Penninsula.  Known the Kumano Suigun (navy), these seafarers, whose Japanese ethnicity is less disputed, seem to have been as much mercenaries as thieves.  There are records of them assisting the Minamoto clan to victory in the Genpei war that brought an end to the Heian Period.

The leader of the Kumano Suigun at this time was a man called Tanzo.  He was said to be a cousin of Minamoto Yoritomo on his mother’s side.  There is also a legend that he was the father of Benkei, the mighty warrior monk who assisted Yoritomo’s half-brother, Yoshitsune.  (Legends about Benkei, whose paternity was never confirmed, are legion.  Someday I’ll blog more about him.)  It is said that since Tanzo had ties to both the Minamoto and Taira sides of the Genpei war and wasn’t sure which to side with, he used omens to tell him.  Most particularly, he attended cockfights at which red birds where pitted against white birds.  Red was the signature color of the Taira and white the color of the Minamoto.  Ultimately only white birds survived the fights, swaying Tanzo to the Minamoto side.  He assembled more than 2,000 warriors from across the Kii Penninsula, loaded them onto more than 200 boats and led them in the final defeat of the Taira.

A cave that is said to be Tanzo’s most famous hide-out is open to visitors.  The cave is situated in the spectacular Sandanbeki Cliffs south of Wakayama’s famous Shirahama (white sand) beach.  Sandanbeki means “three folds” and the 50 meter high cliffs are so named because their height and jagged course is said to resemble a Japanese folding screen.  The cliffs are said to be the result of uplift and erosion of a massive flow of volcanic magma.  The erosion has also produced a number of caves along this coast. 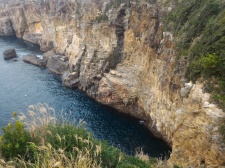 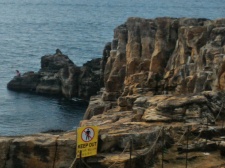 The sea can pound heavily into these cliffs, making entry through the mouth of the cave extremely difficult.  The wave action is such that, one cannot help but wonder at the idea that pirate ships ever sought refuge here.  These days, visitor access is via an elevator that whisks visitors from the top of the cliff to the interior of the cave in a matter of seconds.  (Entry fee:  JPY1,300) 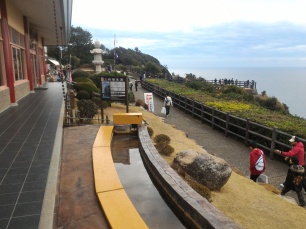 Once in the cave, you are welcomed with a small glass of complimentary juice and displays of samurai armor and pirate, as well as fishing, equipment. 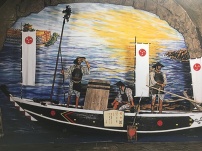 The cave is large and labyrinthine.  One chamber of the cave is dedicated to a shrine of the goddess Benten.  The patron of music and fine arts, she is always to be found near water.  Doubtless the pirates also appealed to her for protection. 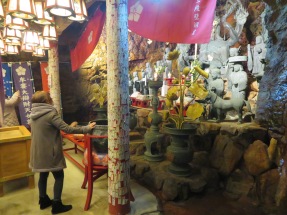 Another chamber has been outfitted with a wooden floor and walls, effectively turning it into a “living room”.  Others were clearly for storage of weapons or booty. 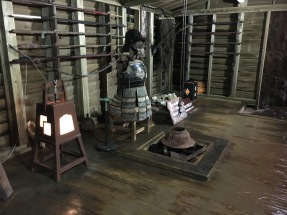 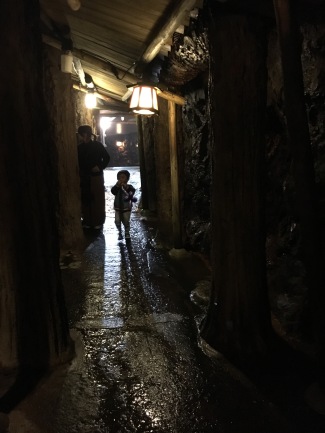 Most interesting, of course, is the part of the cave where the sea still enters.  Watching the water rise and fall with the waves was almost mesmerizing.  On the opposite wall of the cave was even a small blowhole, from which the waves would, from time to time, force water to spout, even on the relatively calm day I visited. 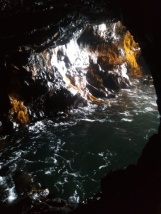 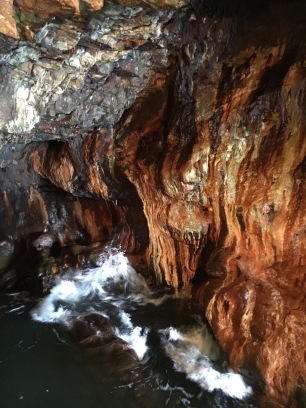 There is a small man-made platform just at the mouth of the cave, allowing for views outward as well.  I was surprised to find a number of large metal hand-holds embedded in the cliff-face just outside.  One of the attendants explained that the local fire-fighters use them to practice climbing and other maneuvers in their heavy protective gear.  Apparently they had been practicing just that morning, but I missed it. 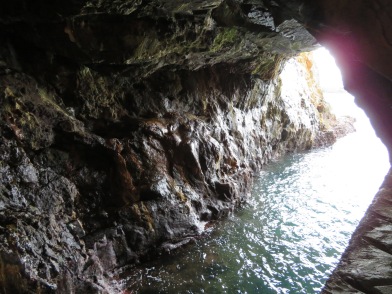 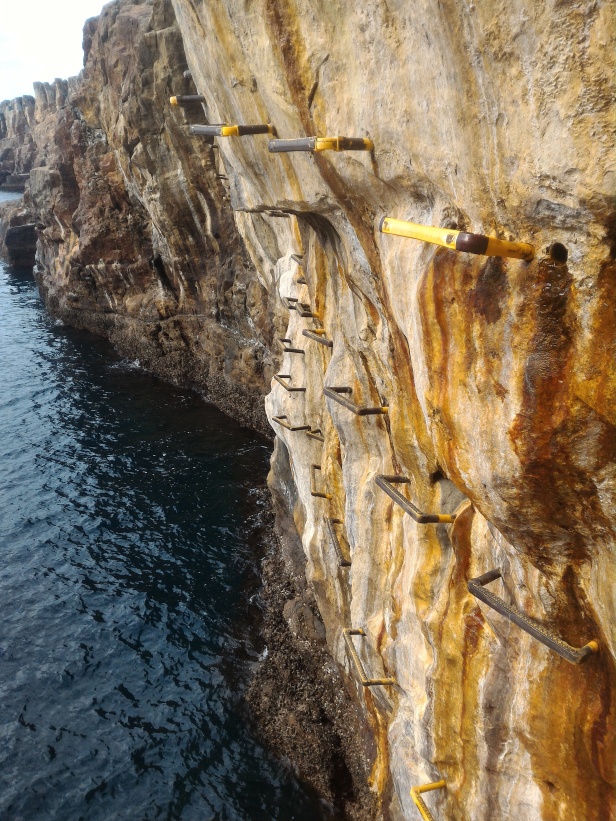 There are no pirates left in the cave to talk to, and I didn’t hear anyone talking like a pirate when I was there (not that I would recognize what Japanese pirate talk sounds like), but this is a wonderful little “slightly off the beaten track” spot to check out.

Access:  Catch the Meiko Bus from JR Shirahama Station.  Sandanbeki Cliffs and the pirate cave are a short walk from the Sandanbeki bus stop (about a 30 minute ride from the station).