Near Shimizu in Shizuoka Prefecture there is a spit of land extending into Suruga Bay that forms Shimizu Harbor.  Known as Miho, the end of the spit was once its own island, but over centuries, silt has done its job to connect the island to the mainland and form the spit.  On the outside of the spit is Hagoromo Park and “Miho no Matsubara” (the pines of Miho).  This park is one of 25 locations included in the Mt. Fuji World Heritage listing … because of a wonderful old legend.

Once upon a time, a fisherman named Hakuryo was walking along the shoreline enjoying fine clear weather and a magnificent view of Mt. Fuji rising in the distance when he happened upon a garment hanging on a pine tree.  The garment was a shimmering golden feathered robe (hagoromo).  Thinking the robe must be valuable, Hakuryo removed it from the tree and rolled it up to take home to his family.

Just at that moment he heard a voice and a beautiful heavenly maiden, or tennyo (perhaps the Japanese equivalent of an angel), appeared, saying that the hagoromo was hers, that she had only removed it to have a swim and that she now wished him to return it to her.

Hakuryo demurred.  “This was abandoned and I have found it, so now it is mine.” he said.  “It is obviously quite valuable.  I am taking it home to sell.  The money will provide for my family.”

“But I must have it back,” cried the maiden.  “Without it I cannot return to the home of the gods where I belong.”  She wept pitiably and eventually Hakuryo’s heart softened.

“Alright,” he said.  “I will return the hagoromo to you if you will perform for me the dance of the heavenly maidens.  Everyone knows of this dance, but no human has seen it.  I would see it as a condition of my returning the robe.”

“I can only perform the dance for you if I am wearing the hagoromo, so you must return it to me first.” replied the maiden.

“Ah!” said Hakuryo.  “If I give you the robe first what’s to stop you from fleeing without ever doing the dance?  You must dance first!”

The maiden responded sharply.  “Lies and deception are part of the human world, but not part of my world.  We of the heavens keep our promises.”

Hakuryo was ashamed of himself for even thinking the maiden would not keep her word and he silently handed the hagoromo over to her.

As the maiden donned the robe, the music of flutes and drums began to play and she began to move with the music.  As she danced on, a sweet aroma filled the area.  She began to float above the earth and danced higher and higher, moving toward Mt. Fuji as she danced and eventually disappearing into the mists of the mountain-top.

Hakuryo was left with nothing but his memory of the performance and this tale to tell.

Hagoromo Park contains a massive old pine tree said to be the tree on which the maiden hung the hagoromo while she swam, thus the spot where Hakuryo found the robe. 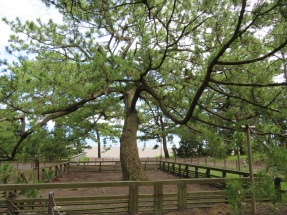 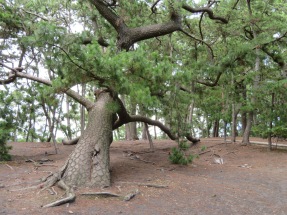 The park is generally a pleasant spot to enjoy the beach, breathtaking ocean and mountain views, and stroll among the pine trees known as “Miho no Matsubara”. 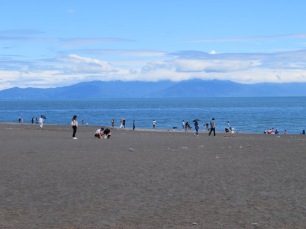 The hagoromo legend is also memorialized in a famous Noh play which is performed by torchlight at Hagoromo Park every year during the Hagoromo Matsuri.  In 2017, the festival will take place on Saturday, October 7, with various dance performances from 1 pm to 4 pm.  The Noh performance, for which tickets are now on sale, will begin from 4:30 pm.   (Details on how to purchase the tickets are in Japanese here.)

While you’re here, be sure to visit Miho Shrine, located at the end of a long, pine tree-lined boardwalk heading inland from Hagoromo Park. 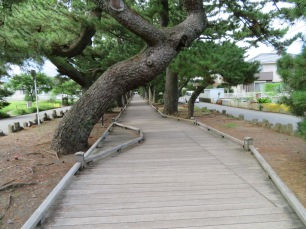 The shrine claims to have, among its sacred objects, scraps of the original hagoromo.  It is famous as a shrine for marital harmony.  Its situation, with the sea in front of it and Mt. Fuji behind has also led to it being regarded as a “power spot” (or, as some would say, good feng shui). 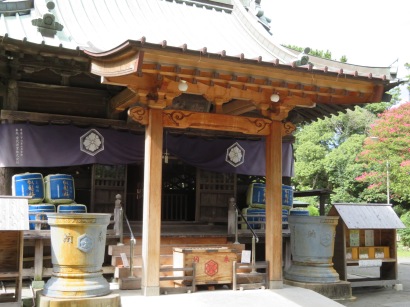 Access:  From JR Shimizu station catch the “Miho Yamanote line” bus and get off at  “Miho-no-Matsubara Iriguchi” (about 25 minutes).  By car, it’s about 30 minutes from the Shimizu interchange of the Tomei Expressway.