Japan has many traditional performing arts, each with its own origin and style.  Noh, which dates back to the 14th century, combines music, dance and drama, as well as the distinctive feature of performers who are often masked.  The plays are often historic legends and the language used is often so old that even native Japanese speakers cannot understand what is being said.  The first time I went to a Noh performance I noticed a gentleman sitting across the aisle from me attempting to read a script/libretto by the dim emergency lighting.  At least, I thought to myself, he can figure out what’s going on.

I find Noh to be a rather curious performing art.  The staging is elegant and highly stylized, with the actors’ movements precise to the level of choreography.  Yet, it is said to have originated by some broke, itinerant actors, just trying to drum up an audience.  One history relates that the third Ashikaga shogun fell in love with a 12 year old actor playing a woman, thus providing the artform with samurai patronage that ultimately led to it being regarded the “warrior’s performing art”.

Fast forward three centuries to the Tokugawa shogunate and we find Noh remains a favored art among the warrior class, but it also developed a deep-rooted connection to the Shinto religion.  The plays tend toward morality tales and lessons in tradition and social status, particularly emphasizing the nobility of samurai.

After the Meiji restoration in the mid-19th century, Noh had a decline in popularity.  While today it is recognized in Japan as an Important Intangible Cultural Property and is on the UNESCO Representative List of the Intangible Cultural Heritage of Humanity, many Japanese find it too expensive, and too obscure, to patronize.  Among my friends, there are very few who have even seen a Noh performance.

This is not to say Noh should be overlooked by those seeking traditional Japanese entertainment.  It has much to recommend it.

The Noh stage contains a number of very distinctive features central to the performance.  In its most traditional iteration, the stage is a structure and the audience watches by looking into it from outdoors. The stages are still often found on the grounds of large shrines, and many are still in use, especially for torchlight performances in the summer.  This unusual lighting adds to the allure.

Above are two fine examples of such stages.  On the left, the Noh stage at Yasukuni Shrine in Tokyo.  This stage was originally built in 1881 on the present day site of Tokyo Tower and was moved to Yasukuni Shrine in 1904.  On the right is the even older Noh stage at Chusonji temple in Hiraizumi.  Re-built in 1853, it still sports a thatched roof.

There is no curtain on a Noh stage, so players can usually be seen before they have even technically come on stage.  Most feature an elaborate painting of an old pine tree on the back panel of the stage.  The musicians are usually seated in front of this panel.  On the left-hand side as one faces the stage there is a runway by which many actors make their entrance/exit.  On the right-hand side is an area where the chorus sits.

These features carry through to Noh stages in indoor theaters as well, many of which now also have screens on seat backs, through which the action is explained to the audience. 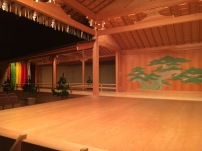 Possibly the feature for which Noh is best known is its masks.  While many Noh characters are portrayed by unmasked actors, when the actor is playing a woman or a goblin or some other character which his own face cannot sufficiently convey, a mask is used.  Noh masks are hand carved of light-weight wood–most popular is hinoki or Japanese cypress–by wood carvers who also specializing in carving Buddha images.

Each mask is said to contain a spirit of the character, so the mask must be properly greeted before it is put on.  Many female masks have subtle differences in color or hairline to connote the age and marital status of the character.  A well-carved mask of a young woman can actually change expression from sadness to happiness simply by whether the wearer has tipped his head down or back while performing.  Many goblin masks are also female–a woman disappointed by some heartbreak who has therefore allowed her horns (!) to show. 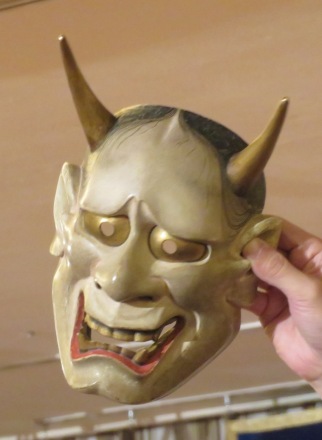 Setting aside the masks that change expression based on the angle of observation, most expression conveyed by a masked actor comes through hand gestures and body movement.  The body movements are often quite acrobatic and even the manner of walking is regarded as a form of martial art.  One actor explained hand movements as requiring him to recall his own latest happy or tragic experience and channel that into his motions.  Upon hearing this, I could not help but think of American “method” acting.

Noh costuming ranges from performers in black kimono and muted hakama to characters in elaborate layered kimono, often made of brocade or heavily embroidered fabric.  These costumes, combined with the hand gestures and body movements, are what makes Noh so visually pleasing to watch, even if it is not possible to understand the words spoken by the actors.

Another feature of Noh is the lack of props.  At most the actors carry a fan or a sword, but there are no other props on the stage.

The one feature of Noh that holds little appeal for me is the sound of it.  The music is based on old Japanese court music and what instruments it uses are those ancient ones.  The delivery of the lines, and the chanting of the chorus, are in the style of religious intonations.  Personally I find it all a bit grating on the ears.

As I mentioned earlier, the subject matter of Noh plays are often morality tales, sometimes based on old legends.  The Hagoromo legend is one example.  Another is Takasago, a story of a “loving and long-married couple” in the Osaka area.  The central song in the Takasago story is often performed at Japanese weddings as a wish for connubial bliss.  Other plays relate to samurai adventures, such as Funa Benkei, in which Minamoto Yoshitsune and his trusted advisor, Benkei, are seeking to escape from Yoshitsune’s vengeful older brother or Tsuchigumo, a tale of samurai fighting a monstrous spider in whose webs they become entangled.

If you’re going to indulge in attending a Noh performance, I would recommend two things:  (1) try to find out a bit in advance about the story being performed, and (2) don’t worry too much about understanding the story, just enjoy the visual spectacle, including the highly stylized hand and foot movements as well as the costuming and staging.  Who knows?  You could find yourself becoming an aficionado.

2 thoughts on “Which part of “Noh” don’t you understand?”