Little remains of Japan’s famous cherry blossoms except a few pale pink petals caught by the wind and swirling in the gutter.  But as I watch these petals dance, in the corner of my eye I catch sight of a burst of color–a vivid shade of magenta smiling at me from the hedge that divides the walkway from the road.  The cherry blossoms have given way to azaleas, the next big flower event on the Japanese calendar.

The splash of color azaleas provide in April and May (and even into June, if we’re lucky) adds brightness to the warming spring weather, making even ardent urbanites want to get outdoors.

I give Tokyo city planners full marks for using azaleas as roadside hedges and ground cover.  They are evergreen, but for several weeks every spring, they are also highly colorful.  Who knows? Such aesthetics could even ameliorate road rage. 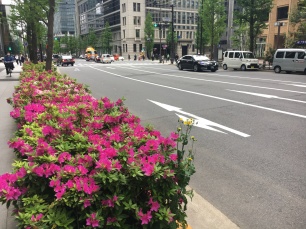 At the same time, azaleas are so hardy that they are an easy plant to maintain in home gardens as well as public parks.  In public areas they sit as unnoticed greenery on hillsides, and even lake sides, until spring, when it is their turn to shine.

One of the most popular places in Tokyo to enjoy azaleas is Nezu Shrine, which boasts a hillside garden of some 3,000 azalea plants in 100 varieties.  Every year in April and May, the shrine hosts their Tsutsuji Matsuri (Azalea Festival).  In 2018, the festival runs from April 7 to May 6.  Besides the flowers, the festival offers taiko drum performances on April 29, 30 and May 3, 4 and 5 as well as a matoi parade on April 29.  And, of course, what festival would be complete without fair food?  Lots of stalls offer freshly cooked sweet and savory treats.  There are also Tohoku craft beers and an ama-zake tasting room. 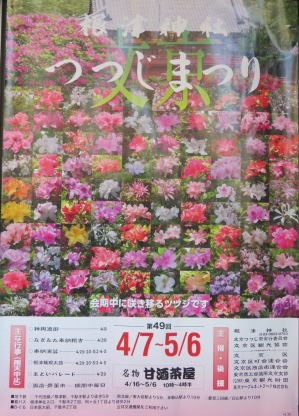 While Nezu Shrine is just a 5 minute walk from 3 subway stations (Nezu, Sendagi and Todaimae), I find entering from the direction of Nezu station most appealing.  Local merchants get into the azalea spirit with the wares displayed in front of their shops (azalea ice cream, anyone?); there is even an apartment building named “Azalea”.  But more importantly, one can see the flower-laden hillside even before passing under the shrine’s torii gate, and the view just gets better and better! 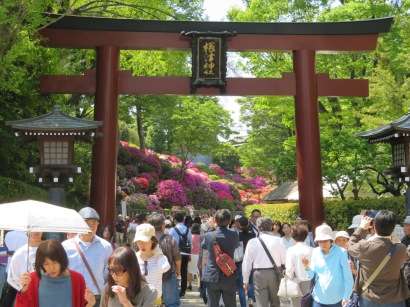 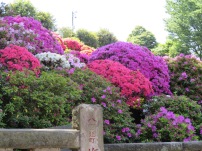 The colors and varieties are truly spectacular! 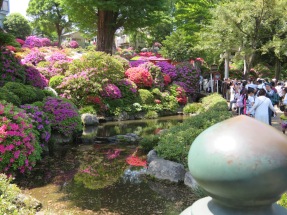 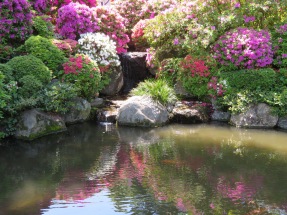 With all this seasonal color, it may be easy to forget that Nezu Shrine is a religious site.  Even in the midst of the festival, plenty of people are offering their prayers here, too. 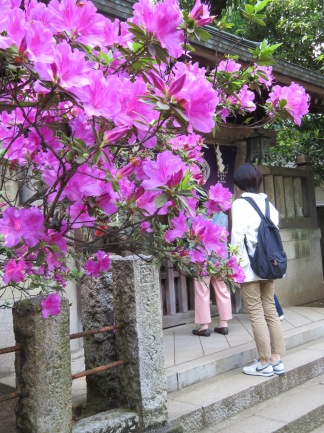 Nezu Shrine is regarded as one of the 10 great shrines of Tokyo.  It has nearly 2,000 years of history, but was moved to its present location in 1705 by the fifth Tokugawa shogun.  In addition to the main shrine, which is surrounded by a lovely lattice-windowed (sukibei) wall, there is a Noh stage and an Imari shrine complete with a tunnel of red shrine gates as its approach.

Somehow temples and shrines are commonly used as battle sites or staging grounds for battles, possibly because they are usually relatively open, making it easy to assemble and order troops.

Watching the others visiting the shrine for the azalea festival, I can’t help but wonder how many of them are even aware of this episode in the shrine’s history.  Perhaps the azaleas and the other features of the shrine override the violence of its past and create peace.  Wouldn’t that be amazing?

One thought on “Amazing Azaleas”