Stepping into the latest exhibition at Shibuya’s Toguri Museum of Art, I felt as if I was in heaven.

The exhibition, entitled “Beautiful Glazes in Ko-Imari Ware”, features the glazes used on Ko-Imari ware, some of Japan’s earliest refined porcelains, dating back to the 17th century. The pieces on display are exquisite.

It was refugee potters from Korea at the end of the 16th century who introduced sophisticated porcelain production techniques to Japan, working in the Hizen district of Kyushu where suitable raw materials were readily available. During the Edo Period (1603-1864) the porcelains were produced in several communities across the district, most notably Arita and Imari. These porcelains collectively came to be known as Ko-Imari (Old Imari), taking their name from the port through which they were shipped overseas and to other parts of Japan.

Glazes are the glassy coating baked onto pottery and porcelain in the firing process.  Glazes both decorate and seal the product. The exhibition features 90 items (some are sets, actually) that exemplify the four glazes used in the production of Ko-Imari ware, set in two of the museum’s four main exhibition rooms. (Note: photos are not usually allowed inside the museum; my photos were taken with special permission.) 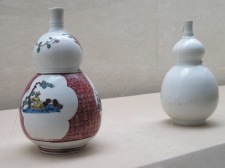 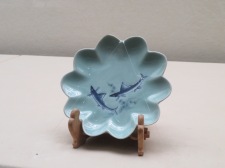 Visitors are greeted in the first room by a multi-colored plate from the mid-17th century standing alone in the center of the room. This plate, with images of cranes, tortoise, pine, bamboo and plum, is just perfect for this new year’s season, but is also a perfect representation of the “beautiful glazes” as it contains all four glazes:  tomeiyu (white or transparent), seijiyu (celadon), ruriyu (blue), and sabiyu (brown). The exhibition refers to it as a masterpiece; and rightly so! 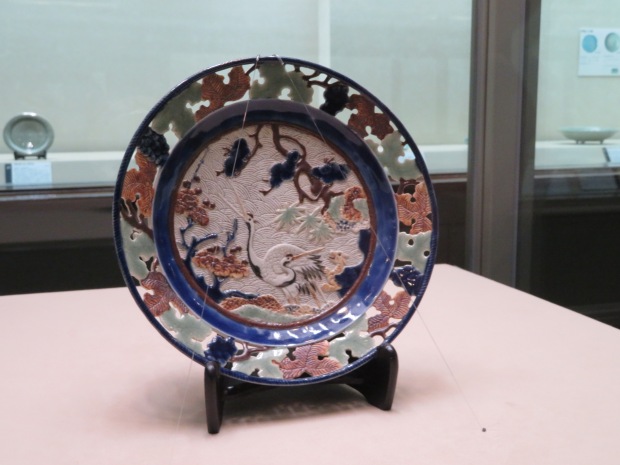 Each of the four walls of the first room features works in one of the four glazes.  Sometimes the items are a single color, sometimes they are principally one glaze, with other colors added for accent. 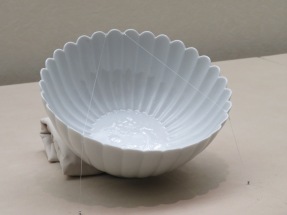 It is interesting to observe how the shape of the piece and even the firing temperature can result in variations of the color of the glaze. 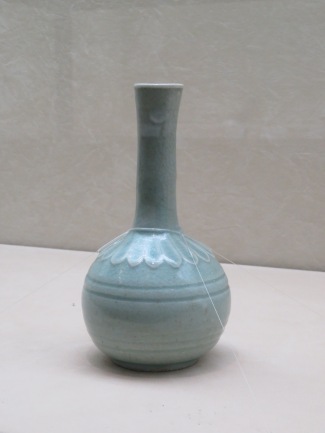 In the second room of the exhibit, there are several pairings of items–dishes of the same shape but with different glazes.  This arrangement starkly demonstrates the impact a glaze can have on the look of the finished product. I recommend moving clockwise through the exhibit. On the explanatory cards, there were also colored “flags” indicating which glazes were used on each item. 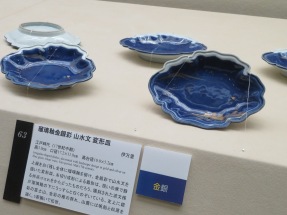 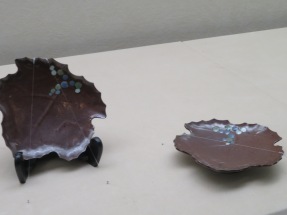 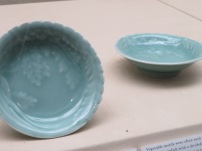 Other examples of  Nabeshima ware are a number of large shishi (Chinese lion-dog) figurines, glazed in celadon.  It would appear these figurines were a bit of a Nabeshima specialty. The final shishi figurine, a group of three tumbling over each other (see banner photo above), is in sharper detail and using different colored glazes on each shishi. This piece is not Nabeshima ware but rather what is called Hirado ware, a type of porcelain made in nearby Mikawachi. As with many other items in this room, it provides visitors with a point of comparison that helps place the other pieces in context.

Similarly, the final display case I came to contained a set of five Ko-Imari plates from the mid-17th century, placed near a Chinese vase and bottle, both from the 18th century Qing Dynasty. Again, the exhibition is giving visitors an opportunity to compare, this time Ko-Imari ware to Chinese porcelain using similar glazes (albeit several decades later). The colors of these items were also a bit different from the rest of the exhibition, as some metal was added to the glaze (iron to give a greener hue; copper oxide to create more red). For some reason, the set of plates particular intrigued me and I found myself lingering here. 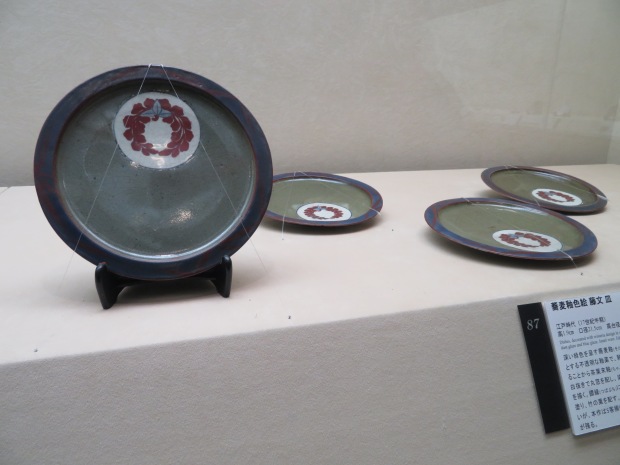 Who am I kidding? Given the opportunity, I would have lingered and sighed over nearly every piece in the exhibition, as they were each distinct and special.

In addition to the current special exhibit, which ends on March 21, 2018, there is an exhibit of shards in the first-floor exhibition area, another second floor room containing the permanent exhibit, a side room with more information on works from Mikawachi, and other pieces located in display cases on the staircase and in the hallway on the second floor.

The Toguri Museum of Art, located in Shibuya, was founded in 1987 by Tohru Toguri, who by that time had been collecting Asian antiques, especially porcelains, since the 1960s out of concern for the need to preserve this aspect of Japan’s heritage as Japan Westernized. It is the only museum in Japan that is dedicated to porcelains.  With a collection of nearly 7,000 items, only around 100 of which are on display at any one time, this is a museum that warrants repeated visits (good news for those of us who live in Japan!).

Address:  1-11-3 Shoto, Shibuya-ku, Tokyo
Hours:  Tuesday through Sunday, 10 am to 5 pm (8 pm on Fridays); also open on Mondays that are public holidays and on the 4th Monday of the month (“Free Talk” day when visitors may converse while viewing the exhibit).
Access:  15 minute walk from the Hachiko exit of Shibuya station or a 10 minute walk from the north exit of Shinsen Station
Admission:  Adults – JPY1,000; Students – JPY700; Children – JPY400.   Click here for a discount coupon.
Annual membership:  JPY5,000 (provides unlimited visits, the museum’s journal, docent guidance on advance request, and invitations to special events)

Special thanks to the Toguri Museum of Art, and especially Kurosawa-san and Konishi-san, for allowing me special access to the exhibition and providing such thorough explanations.

One thought on “The colors of Ko-Imari: it’s all about the glaze”