Ibaraki, though not far from Tokyo, is not widely regarded as a destination for international tourists.

Yet it can be quite rewarding to get off the beaten track to explore “real” Japan. Moriya, just 30-some minutes from Akihabara on the Tsukuba Express, is a great example.

Here, in a day trip from Tokyo, the intrepid adventurer can enjoy historical sites associated with pseudo-revolutionary samurai Taira no Masakado, tour a major brewery, stroll through pretty parks, suburban gardens, and rural fields, take a riverside walk, and finish off with a replenishing hot springs soak.  (The total distance is about 9 km., all the better to appreciate your hot springs visit at the end!)

Leaving Moriya Station by the West Exit, before descending to the street level, take a hard left and proceed along the overhead walkway across Highway 254 and then descend to street level on the staircase/bicycle ramp.  Continue straight for 20-some meters and take the narrow side road on the right to reach the main approach to Choryuji on the right, a very pretty cedar-lined laneway about 100 meters long. 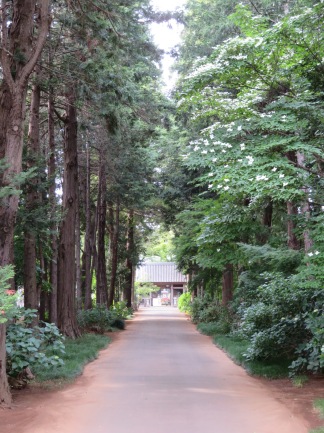 The founding of Choryuji is said to have been sponsored by Masakado, who was lord of this area.  Masakado is credited with many works to aid in the overall development of the area, including having wells dug to aid in agriculture as well as religious sponsorship.

The temple, serene and well maintained, also enjoyed the patronage of the Tokugawas during the Edo Period. The Nio guardian kings in the temple gate, the belfry, and the “water harp” (pour a little water in the “drain” to hear a pretty tinkling sound) are particularly pleasing features.

From Choryuji to the Asahi Brewery is a 20-25 minute walk (about 2.2 km.) through suburbia and not particularly scenic. Depending on your timing, consider returning to Moriya Station to catch the free shuttle bus, which leaves Moriya Station (Bus Rank #2) on the hour and at half past and takes about 10 minutes. 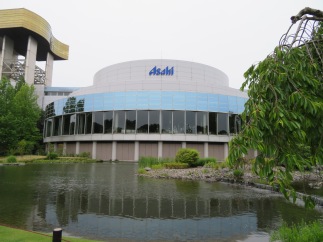 Asahi Super Dry is one of Japan’s most popular beers and the Asahi Ibaraki Brewery is one of eight nationwide where it is produced.  Other popular Asahi products are also produced here, including Gran Mild, Asahi’s newest brew, released just last month (April 17, 2018) and featuring lemon grass and herbs to give it a distinct aroma and flavor.

I’ve written elsewhere about brewery tours, but didn’t include this one.  The Asahi Ibaraki Brewery is open for tours daily (with scheduled days off each month and at year-end), although the production line does not run on week-ends (except during the height of summer when demand requires extra production).  There are 90 minute tours, free-of-charge, starting on the hour and half hour from 9:00 to 15:00.  To ensure your space, it’s best if you make a reservation, either on-line in Japanese or by phone (0297-45-7335) in English or Japanese. English audio assistance is available.

The tour begins with a orientation movie, then moves to an overview of the malting and mashing process and an explanation of the key ingredients of beer.  Visitors are encourage to touch, smell and even taste the grain and hops. 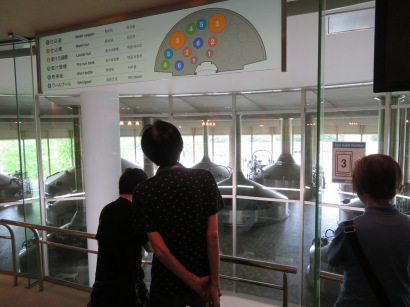 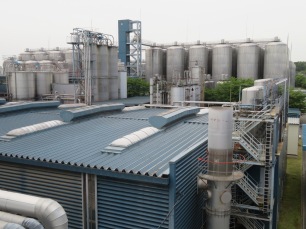 Finished beer is bottled, canned or kegged and then packed for shipment on the expansive, yet Chaplin-esque packaging floor.  Even on a Saturday when not in operation, it’s an impressive sight to see.  And there is a video, so one’s imagination is not too challenged. 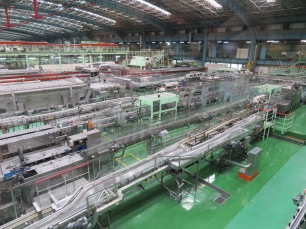 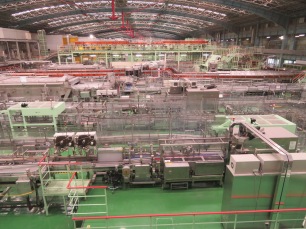 After a quick talk on the plant’s energy efficiency and recycling efforts, the tour is finished and visitors are taken to the viewing tower, where they can look out across the Kanto Plain (even Tokyo Sky Tree, more than 30 km. away, is visible on a clear day) while sampling Asahi products, beginning with a glass of ice cold Asahi Super Dry, or one of their non-alcohol products, if you prefer.

Next is the exploration part of the day.  It will help to use the map below.

Go left as you leave the grounds of the brewery.  This is a bit of an industrial area and the vast brewery will continue to be on your left for about 600 meters.  Just beyond that, take the first right and follow the road as it bends right and then left, until you reach Shiki no Sato (“home of 4 seasons”) park.

This pretty  park is in traditional style with a central water feature and strolling paths to enjoy seasonal flowers.  At the “top” end of the park, there is even a water wheel, commemorating the use of water for traditional grinding and polishing operations in bygone days.

I doubt that Masakado could be credited with the development and use of waterwheels, but on the hill to the left as you enter the park sits the graves of three of his most loyal retainers, who sacrificed their lives to his lost cause in the 10th century. 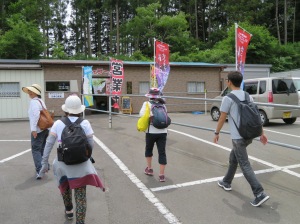 Leave the park by climbing the stairs above the top of the main pond (downstream from the water wheel) and go right.  Not far up the hill you will find a little ice cream shop on the left.  By now you’ve burned off most of your free beer samples and need a little refreshment to hold you until lunch, right?  They make their own ice creams here and have some unique flavors like tomato sorbet.  Don’t be so shocked.  Remember, tomato is actually a fruit.

Just a little further up the road you will come onto a very interesting religious site.  There is no shrine or temple building (though it looks like there once was), but there is a large stone torii shrine gate and statues of Kannon and Jizo, two of the Buddhist pantheon.  While Buddhism and Shintoism were freely worshipped together, and regarded by some as interchangeable, for roughly 1,000 years, they were separated by government decree in the late 19th century, making it unusual to find a site where the two are so freely integrated.  Surely this area is not so remote that they didn’t get the memo!  There is no explanatory board in any language, so this one will just have to remain a mystery to ponder as you continue along the road enjoying the sight of agricultural activity.

Meander through these small farms and fields, but try to stick to the map.  It’s easy to miss to right turn to the river road, as it looks like two driveways, one with stone gateposts and the other just two gravel tracks.  Those tracks are the river road, a chance to stroll alongside the Kinugawa and enjoy its placid beauty. Where the lane begins to climb back to the level of the main road, you’ll find Take Yabu, a little noodle shop overlooking the river.  Soba is a perfect lunch when you’ve been walking and you might even be able to see some fishermen hauling in a catch. 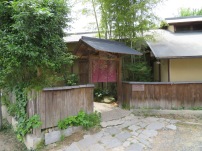 After lunch and a quick stroll through nearby Kiyotaki-dera temple, cross the river and continue on.  Coppun Cafe marks a fork in the road where you need to bear right.  Maybe grab a cuppa here to wash down your lunch and fortify you for the last long stretch (about 3 km.) of walking.

Sometimes it’s difficult to know how to characterize a neighborhood in Japan. What is a city, a town, a village? When are we “in the country”?  Before reaching the river, the walk goes through fields where one definitely feels “this is countryside”. Turning right after Coppun Cafe, the scenery becomes more suburban in feel, but it is mostly large houses on large tracts of land where people seem to run small businesses and grow their own food.  Perhaps “crowded countryside” is as good a label as any.

Eventually the crowded countryside morphs into true suburbia as you reach a “new town” development.  You’ll pass Sutateyama Park, with its artificial “mountain” redolent of the mound at Waterloo (only smaller).  If you’ve got the energy to climb to the top, you’ll get views back to the river and some perspective on the suburban development of the area.

Just beyond Sutateyama Park, cross Highway 3 and bear left.  Kinu no Yu onsen is on the right, just past the auto dealership. This is a new-ish, modern onsen in the style of “spend the day at the baths”. Entry is JPY1,400 (bring your own towel or purchase one there; soaps and shampoo provided). 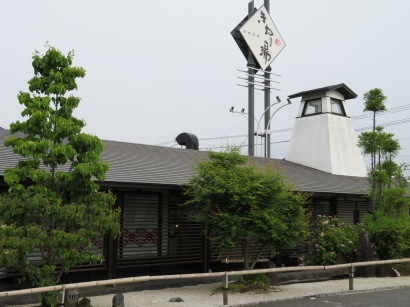 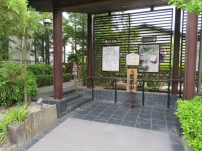 There are hot, tepid and cold baths indoors, flower-scented baths on the ladies side, several outdoor tubs of various temperatures, and saunas.  One could spend hours “taking the waters” (there is also a restaurant and an “esthe” center offering massages and other personal grooming/care).  But keep an eye on the time.  Kinu no Yu’s a free shuttle bus back to Moriya Station runs only once an hour on the hour.  It’s a long way back if you miss it.