Saitama is often considered just a “bedroom” of Tokyo, but it has much to recommend it to tourists and day trippers, especially in its western reaches.

This is an especially good time of year to explore one little corner of the Sayama area of Tokorozawa–the area around Seibukyujo-mae station.  Throughout the summer, this is a baseball Mecca, but in early summer (basically until the end of the rainy season), one can also enjoy an entire hillside covered with lilies.  There are a few other historical surprises out here, too.

Seibukyujo-mae station is the terminus of two Seibu train lines, so accessible from Seibu Shinjuku or Ikeburo Stations in about 45 minutes.  Given that the station name means “in front of the baseball stadium”, it’s only logical that many people relate this station to baseball.  True to the station’s name, the Metlife Dome, home of the Seibu Lions baseball team, sits just outside the station and is a hopping busy place on game days.  If you’re a baseball fan, this is the place to be!

Even little decorations in the station’s public toilets reflect baseball.

If instead of baseball your interests run to enjoyment of nature or other tourism, turn right instead of left out of the station and take the overhead bridge to the hillside opposite the stadium (above the Family Mart convenience store). 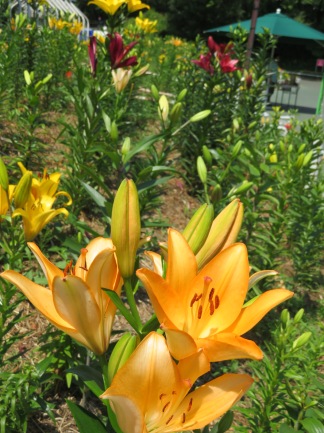 Approximately 450,000 lilies in 500 varieties have been planted in this 3 hectare park and then, it seems, left largely to nature.  They are growing everywhere: in open meadows and cleared hillsides, as well as in the woods.  If you’ve never been “forest bathing”, here’s a great place to immerse yourself. 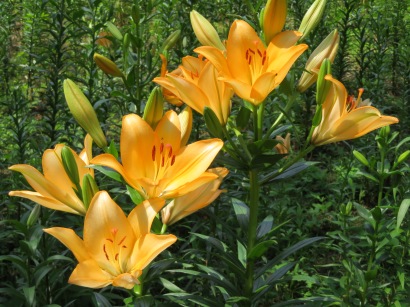 Trails allow visitors to wander through and enjoy the fields of flowers in bloom from late May through early July.  Only about 30% were in bloom on my visit; it must be spectacular in full bloom! 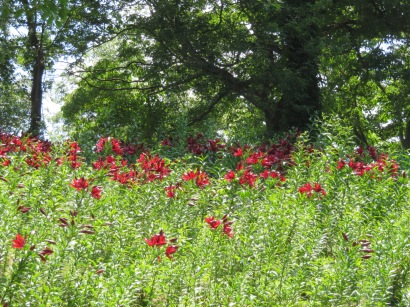 At the suggestion of the gate attendant, I followed a counter-clockwise course that took me first through the wooded area at the bottom of the hill.  There was even a dog run where visitors with dogs could let their pets off the leash for a while.  Toward the top of the hill were sunny, open areas also covered with lilies. 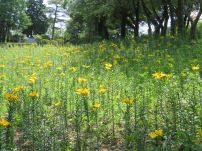 A small eatery advertised “lily root tempura”; how suitable for the season.  Of course, other treats were also on offer.  Further on was a little refreshment stand with “traditional” seating under red umbrellas overlooking more lilies. 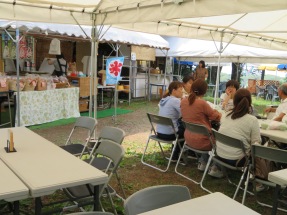 While the lilies really are the stars of the show, some clematis bravely climbing cherry trees add a bit of interesting contrast. 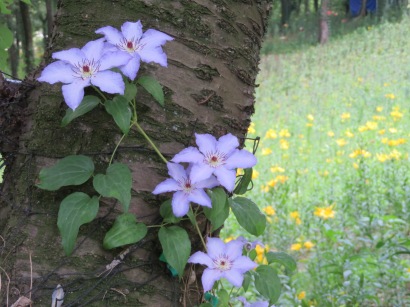 When Unesco Village was closed in 1990, Seibu Railways built a dinosaur exhibition on the site, which it operated from 1993 until 2006.  That abandoned exhibition building borders the lily garden, leaving visitors to the garden feeling a bit of a forlorn.  It is obvious that the rest of the site, further up the hill, is also abandoned and empty.

But don’t despair!  There is still more to explore in this area.  A narrow wooded lane flanking the hill just above the lily garden leads to the back entrance of Sayama Fudo Temple, whose stupas are visible from the lily garden entrance.  This back entrance is the site of Tomogatomon, a gateway originally constructed in 1632 at Zojoji, a Tokugawa family temple in central Tokyo and moved here by the Seibu Group when it developed the site of the Tokugawa Family Mausoleum on the Zojoji grounds into the Tokyo Prince Hotel.  Since Sayama Fudo Temple was founded in the 16th century, not long before this Tokugawa gate was constructed, it’s a good fit.

Two other Zojoji gates from the mausoleum were moved here at the same time.  They’re on the other side of the hill, so you will pass by them at the end of the day, when you’re on your way back to the station.

In the meantime, enjoy the many other features of the serene hillside temple and leave via the stone lantern-lined lane leading to the parking lot above the temple. 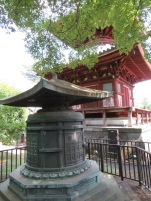 At the parking lot, turn left and take the street heading down the hill.  This street passes by a hillside cemetery before leading you to Konjo-in on the right.  Also known as the Yamaguchi Kannon, this temple dates to the 9th century, a time when it was common to dedicate temples to Kannon, the Buddhist goddess of mercy.

The temple complex seems a bit of a polyglot place.  Although it was nearly empty of visitors when I went there, it’s a very “busy” site, with a number of sub-temples, each with a different purpose. There is also an interesting blend of architectural styles, include some ordinarily associated with China or Thailand. 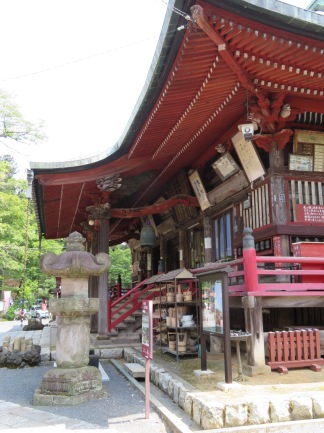 At the front gate was an effigy of a sacred horse (more usually seen at shrines than temples) and a number of jizo statues.

Jizo are frequently to be found at Buddhist temples, particularly those where grieving parents can have prayers said for their lost (most often meaning unborn) children.  Konjo-in is such a place, with an entire hillside of terraces on which are placed small Jizo statues, each commemorating a child that didn’t get to grow up. 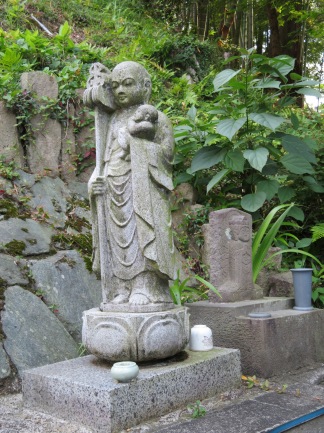 Behind this hill is another cemetery and a small glade, featuring a pond guarded by a statue of Kannon holding a child.  A staircase leading up the hill to the tower housing this temple’s main Kannon statue is flanked by dragon bannisters, reminiscent of the naga sacred snakes on the stairs of temples in Thailand and other parts of Southeast Asia. 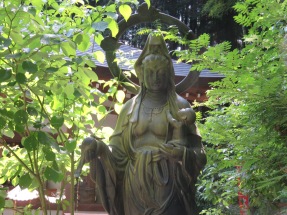 The six-sided Kannon tower in vermillion and white is a magnificent site, even if not always open to the public.  Likely the six sides represent the six Jizo whose job it is to help humans through the six realms of Karmic rebirth, so that they can return to this world. Be sure to take the time to walk through the tunnel around the base of the tower to admire the various Buddhist statuary it contains. 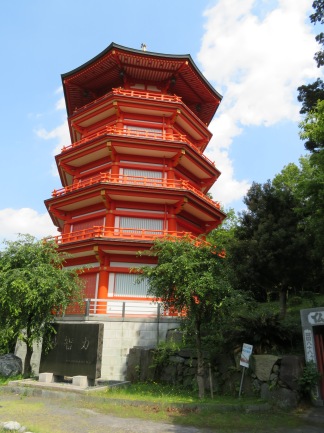 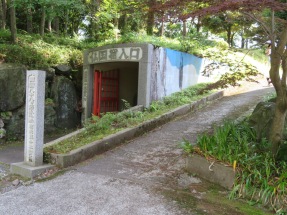 As you descend the hill back to the main temple structure, you will pass by another small temple with distinctly Thai features, and when you reach the bottom there is a Chinese-style temple with Chinese-looking statues of Japan’s seven lucky gods (three of which originated in China).

More dragon bannisters or railings and Tibetan-style prayer wheels around the perimeter of a couple of the temple’s buildings round out the ecumenism to be found here.

Leaving Konjo-in, head back toward the train station (if it’s a game day, just follow the sounds of the crowd).  Stick to the more residential-looking road on the left at the base of the hill and you will soon pass by the front entrance to Sayama Fudo Temple, comprising the other two gates moved here from Zojoji in the 1970s.  They are splendid, albeit in a state of faded glory, and worthy of a little of your time to admire both their construction and their artistry. 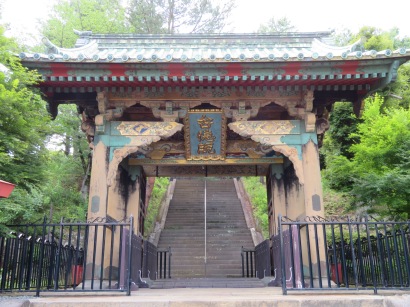 From baseball to flowers to temples, just like Konjo-in itself, this is a polyglot exploration, perfect for early summer.  But one can easily find excuses to visit the area in other seasons as well.  These hillsides are also spectacular in autumn, the Metlife Stadium is also a popular concert venue, and there is an indoor ski slope near the baseball stadium that is generally open from mid-October to early April.

One thought on “Early summer exploration in Saitama”