A bodhisattva is a would-be Buddha who, instead of attaining enlightment, chooses to remain in the world and help others.  In a sense, he represents supreme optimism, compassion, and salvation.  Jizo (地蔵) is one of the most popular bodhisattva in Japan, and one of the most prolific.  It is unusual to visit a Buddhist site in Japan and not find at least one image of Jizo.

An easy way for Westerners to conceptualize Jizo is to think of him as the St. Christopher of Buddhism.  He is widely regarded as the patron saint of children and travelers.

One often sees statues of Jizo, especially on roadsides, standing straight and tall, holding a shakujo staff in one hand and sometimes a manji jewel–to provide light in dark places–in the other.  Sometimes he is depicted holding a child or with children at his feet.  When he stands on a roadside, he is there for the protection of travelers. Historically, of course, travelers often carried a staff to provide surer footing as they walked. 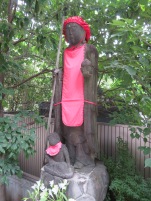 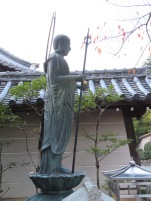 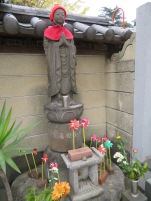 Travelers and locals often put small knit caps and bibs (usually red) on jizo statues to show their care and devotion.  Sometimes roadside jizo are even tucked inside a small shelter to protect them from the elements.  That favor can be returned.  For example, in the Studio Ghibli anime, “My Neighbor Tottoro”, Satsuki and Mei take refuge in such a shelter when caught in the rain on their way home from school.

Indeed, there are various legends of the jizo statues themselves actually coming to the aid of people who have performed acts of kindness toward the statues.

One of my favorites tells of an old man who wove umbrella hats to sell in the local market to get money so that he could buy the ingredients for a new year’s meal for himself and his wife.  But, it being the dead of winter, no one wanted his hats, which are mainly used to keep the sun off while working in the fields.  Defeated in his quest, he was trudging back to his hovel with his unsold hats when it began to snow.  On the side of the road he spotted six statues of jizo, snow beginning to collect on their heads and shoulders.  He brushed off the snow and lovingly tied the umbrella hats on their heads to protect them.  Perhaps he even said a small prayer.  Then he walked on.   When he arrived home, he sat his wife down to explain that there would be no new year’s feast for them this year.  They heard a knock on their door.  When they arrived in their entry way, they found several packages of new year’s food, enough for them to feast on for three days.  Running to the door, they looked out, hoping to thank their benefactor.  In the distance they could see one, two, three, four, five, six jizo statues wearing umbrella hats, disappearing quietly into the snowy night.

The sure footing provided by jizo’s staff is particularly important to one of his most vital missions: to ferry small children across the deep and swift River Sanzu (the Buddhist version of the River Styx) into the netherworld from whence they can begin the reincarnation cycle. Such children would find the crossing difficult, if not impossible, without assistance. But if they cannot cross, they are trapped in a karmic limbo. It is often said children who did not live long enough to accumulate enough good are unable to make the crossing in any event, but jizo helps them to overcome that obstacle as well.  Accordingly, parents who lose pregnancies, babies or children often pray to jizo to look after the souls of their dead children. It is interesting to note that Japan is unique among Asian countries in assigning this role to jizo.

Some temples, like Zojoji in Tokyo’s Minato-ku, Konjo-in in Tokorozawa, and Hase-dera in Kamakura, permit bereaved parents to install jizo statues and have prayers recited for the repose of the soul of their lost baby. Parents often visit the statue which, in the case of an unborn child, is a substitute grave, bringing flowers, candy or toys as a gift to the child’s spirit. In some places, the statues are even dressed by bereaved parents, or at least given little red knit caps or bibs, red also being a symbol of compassion.

At Hase-dera, parents can even given vicariously give their lost child a drink of water by pouring water over the head of a jizo statue.

Jizo protect not only children and travellers but also the likes of firefighters and miners.  One can even find a jizo statue inside the old gold mine in Toi on the Izu Peninsula.  Here, too, it is considered a good deed to pour water over the statue.

Jizo are also believed to have the power to grant wishes, as witnessed by the jizo at Nokogiriyama, where one can inscribe a prayer/wish on a jizo amulet and leave it at the foot of a larger jizo statue.

If one wants to be technical, there are in fact six different jizo, known collectively as Roku-Jizo (六地蔵).  Each represents a different stage of reincarnation or karmic rebirth, during which that particular jizo undertakes to protect humans and see them through.  It is not unusual to see all six jizo depicted together, perhaps an attempt by humans to hedge their bets as to which particular stage they are in or headed for. 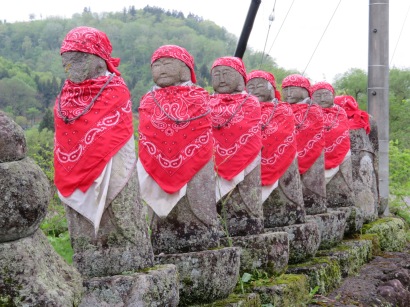 7 thoughts on “Jizo – the ubiquitous protector”