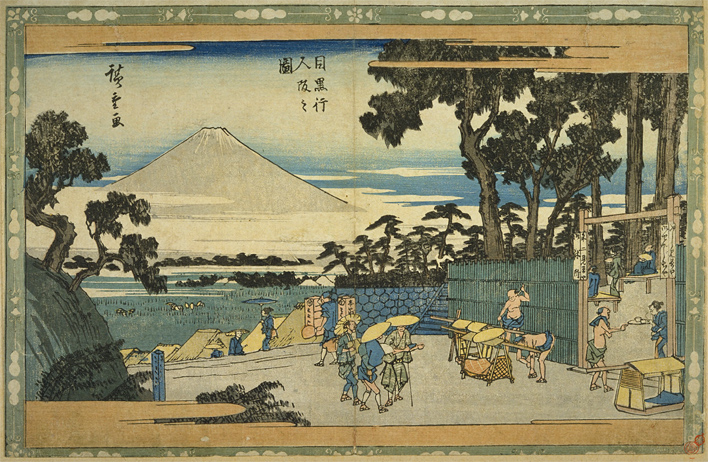 Heading west from Meguro Station it’s all downhill, a descent into the Meguro River valley. Particularly dramatic is the descent on a narrow laneway accessed from the main exit of Meguro Station (on the southern side of Meguro-dori). This steep slope is known as Gyonin-zaka. A gyonin is a Buddhist ascetic, and apparently Daienji, a small temple located halfway down the hill, was once home to many practicing ascetics. Daienji’s principal claim to fame is as the source of the Great Gyoninzaka Fire that destroyed much of Edo (as Tokyo was then known) on February 29, 1772.

Being a city made principally of wood and paper, old Edo was always vulnerable to conflagration. Even twentieth century Tokyo was easily burned, as evidenced by the Great Kanto Earthquake of September 1, 1923 (more was destroyed by the subsequent fires than by the quake itself) and the World War II fire bombings of March and April 1945. But the three great fires of Edo: the Meireki Fire of 1657, the Gyoninzaka Fire of 1772, and the Hinoe Tora Fire of 1806 were said to have been even more devastating.

The Great Gyoninzaka Fire began around 1 pm on the 29th, a particularly windy day (the Kanto region often experiences high winds this time of year). Over the next 24 hours the fire raged across most of what is now the inside of the Yamanote loop and beyond to the Sumida River, leaving nearly 20,000 people dead or missing in its wake. Needless to say, homes, shops, temples and bridges were also destroyed. The daughter of a local vegetable peddler was blamed for starting the fire and was subsequently put to death for her crime. Apparently her grave is in the Daienji cemetery behind the temple buildings.

Although Daienji occupies a compact space, there is much to see here. On the high side of the temple grounds the hillside is covered with 520 statues of the arhats (rakan, in Japanese) who were privileged to hear the Buddha preach and who subsequently achieved enlightenment themselves. They were carved over a 50 year period beginning around 1781 and installed at the temple as prayers for the repose of the souls of those who perished in the 1772 fire.

Two and a half centuries on, the victims of that awful fire have not been forgotten. Tonight I attended special ceremonies at Daienji to commemorate the 250th year since the fire. A special altar was set up in front of the Shaka Nyorai, the Buddha, at the base of the rakan statues and stools (properly social-distanced) were set up in the courtyard for attendees.

As the temple’s bell rang out 5:00 pm, three Buddhist priests processed to the altar and began to chant prayers, not only for the victims of the 1772 fire, but also for victims of subsequent disasters including the 1923 earthquake, the 2011 Tohoku earthquake/tsunami, and the current pandemic. The prayers finished promptly at 5:35, the time of today’s sunset. 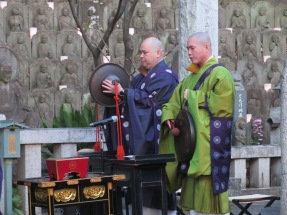 Then attendees who had made a prescribed offering at the temple lined up to offer their own prayers at the altar, one by one. 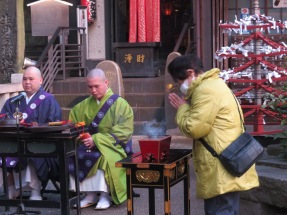 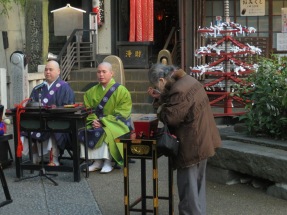 This ritual is normally observed only on February 29 (in other words, every leap year), but because of the 250th anniversary, it was also held this year. It will next be performed in 2024.

During the rites the light of the day was diminishing with the setting sun. Earlier, candles had been placed in front of a number of the rakan statues on the hillside and as the light faded, the candlelight shone ever brighter, bringing with it a sense of peace and calm.

There are many other interesting sights to be enjoyed and experienced at Daienji. The temple’s greatest treasure is its life-sized wooden statue of Shaka Nyorai, carved in 1193. The statue was repaired and restored in 1957, at which time a mirror, some women’s hair and some pieces of paper were found inside. These items were instrumental in determining the statue’s provenance. The delicate statue is usually kept behind closed doors and is only on display about once every two months. Fortunately, it was open to visitors today. Even when the doors are open a special brocade curtain is hung, presumably to keep out light but perhaps also to preserve a sense of mystery surrounding the statue. 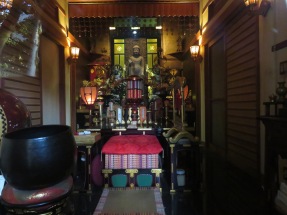 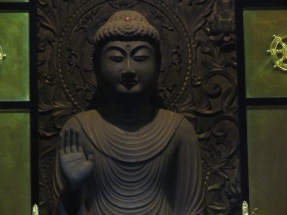 Daienji’s courtyard is home to many other statues, including a collection of six jizo and monkeys who do not speak, see or hear evil (using monkeys for this depiction is actually a pun since the Japanese word for monkey and the verb ending meaning “thou shalt not” are homonyms). Perhaps most noteworthy of the many statues is the yakushi nyorai or Healing Buddha. This statue sits just to the right of the main temple building and is covered in gold leaf, many golden edges fluttering in the breeze. Anyone can buy three small squares of gold leaf for JPY500 to rub onto the part of the statue corresponding with the part of their own body that is ailing, a prayer to the Buddha to take away the pain. 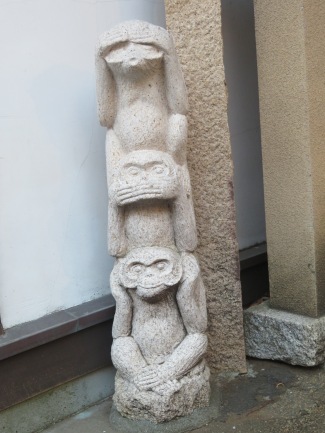 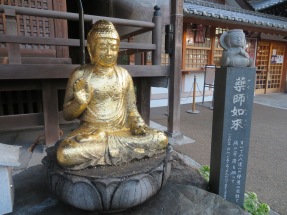 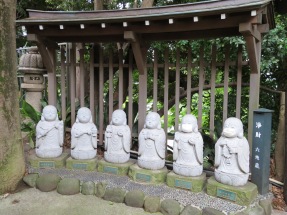 Another unique statue is the so-called “melting jizo”. This is a statue that is believed to have been thrown into the nearby Meguro River, perhaps at the time of the Great Gyoninzaka Fire, and spent some time in the river, eventually to be washed downstream, where it got caught in a fishermen’s net. The statue’s features were eroded away by the action of the river, making the statue appear to have been melted, hence the name. 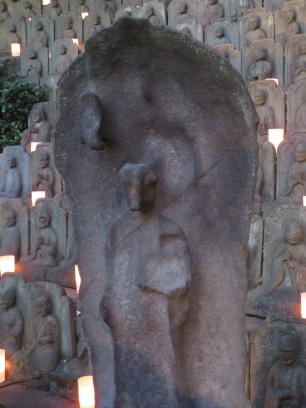 Daienji is also home to a statue of Daikoku, one of the seven lucky gods that are particularly popular at New Year’s. Daienji’s Daikoku, the god of wealth, is often visited by “pilgrims” completing the Yamate Seven Lucky Gods walk, one of the few lucky gods walks for which little images of the gods are sold at each participating temple year-round. Look closely to find some of the symbols particularly associated with Daikoku, including his lucky mallet and the bales of rice he is often depicted standing atop. There are also statues of all seven lucky gods in the courtyard.

Somehow, in spite of so much statuary in Daienji’s limited space, the temple feels neither cluttered nor kitsch-y. And after experiencing today’s ceremony, I have a new appreciation for how seriously the temple takes its own role in atoning for the 1772 fire that accidentally started here and had such a devastating impact on the city.