I previously introduced jizo, a bodhisattva especially popular in Japan as the guardian and protector of children and travelers.  Small statues of jizo can be found all over Japan.  In many locations, the donors who place the statues do so as a good deed, a way to earn merit, the reward for which is manifested in the next cycle of life.  But sometimes, the placement of a jizo statue is an act more in the form of payment of a debt.

Eighteenth century Edo (modern day Tokyo) saw just such a phenomenon.   In 1706, a Buddhist monk named Shogen, who lived in Edo, became extremely ill.  He was told his disease was fatal; there was no hope of recovery.  Shogen did what people in such situations have been doing since time immemorial.  He prayed for recovery and included in his prayer a bargain:  “get me out of this and I’ll erect statues of the six jizo“.  (Recall, there are six jizo, one for each of the six stages of karmic re-birth.)

Miraculously, Shogen did recover.  True to his promise, over the course of the next 15 years, he caused to be erected in Edo large bronze statues of jizo at six locations then regarded as the six entrances to the city.

In modern Tokyo a pilgrimage to all six is a fun way to explore lesser-known corners of the city.  It is possible, with the help of Tokyo’s modern transit system, to visit all six in a single day (move clockwise starting from Honsenji–see map below), although it makes for a very long day.  Get an early start!

Shogen didn’t undertake this project entirely on his own.  Master metal caster, Ota Masayoshi, cast all six of the statues, which were funded by contributions from more than 72,000 donors.  Each statue is of a seated jizo atop a dais of lotus petals into which are etched the names of the donors.

The first statue went up in 1708 at what was probably then the busiest route into the city, the Tokaido.  This famous “east ocean” road, for which Japan’s first Shinkansen (bullet train) line was named, leads along the coast from Edo to Kyoto.  The 2.75 meter statue, with a shakujo staff in one hand and manji jewel in the other, sits serenely facing the Tokaido, just outside Honsenji temple in Tokyo’s Shinagawa-ku.

Honsenji, a Shingon sect Buddhist temple, was founded in the early 9th century, substantially predating Edo.  It is also home to a famous Kannon statue (#31 of the Edo 33 Kannon) and a Bishamonten that is part of the Tokaido Seven Lucky Gods walk popular at New Year’s.  It also hosts a thrilling firewalking ceremony in September every year.

One intriguing bit of Honsenji’s history is that its bell was taken to Europe to be part of the Japan exhibit in the 1867 Paris Exhibition and the 1873 Vienna Exhibition and somehow disappeared after that, only to be discovered in an art museum in Geneva in the early 20th century and returned to Honsenji in 1930.  This incident is the source of close ties between Geneva and Shinagawa-ku that have lasted to this day.

The second jizo to be completed was erected in 1710 at Tozenji, a Soto sect temple in Higashi Asakusa, where the Oshu Kaido entered Edo.  The Oshu Kaido led from Edo north to what was then known as Mutsu Province, now the east coast of Tohoku–the area so heavily damaged by the 2011 triple disaster.  Early travelers bound for Nikko also traveled this road as far as Utsunomiya, before turning westward to Nikko.  This second jizo is just four centimeters smaller than the first.  For purist pilgrims, this statue is regarded as the fourth to be visited.  (Note, it’s also the one that is located farthest from a train/subway station.) 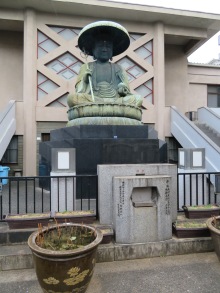 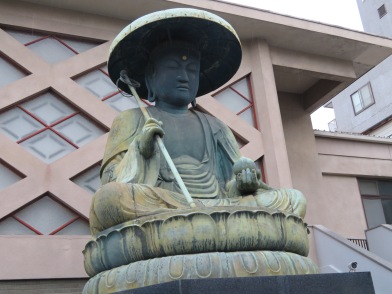 Standing 2.67 meters tall–the smallest of the ultimate six–, the third jizo was completed in 1712.  It is installed at Taisoji, a Shodo sect temple in Shinjuku, the Koshu Kaido’s entrance to Edo from the west.  Taisoji was founded in 1596 and since 1668 has been at this location, a quiet temple ground that has, over the years, come to be surrounded by tall buildings.  It is #2 in the pilgrimage order. 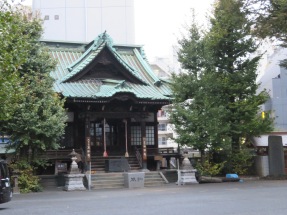 Shinshoji, near Edo’s gateway to the Nakasendo, the inland route between Edo and Kyoto, hosts the fourth jizo, a 268 centimeter statue cast in 1714, lovingly draped with the traditional red bib.  The history of Shinshoji, a Shingon sect temple, is murky–perhaps so old that no one knows.  Stop 3 on the pilgrimage is located just a short walk from Sugamo station. 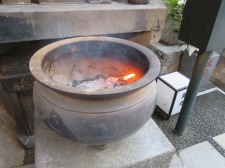 Sugamo is better known for another jizo statue, the togenuki jizo, in Koganji, another temple further down the market street.  Togenuki jizo (“the needle removing jizo“–there is a story there, but let’s not get too distracted) is said to have special healing powers.  A visit to both shows that togenuki jizo is actually the more popular of the two.

The fifth jizo, and the fifth pilgrimage stop, is located at Reiganji, a Shodo sect temple near Kiyosumi-Shirakawa station.  Standing 273 centimeters tall and cast in 1717, the red-bibbed statue guards the Mito Kaido’s entrance into Edo.  Founded in 1624, Reiganji is a relatively young temple.  It sits between Kiyosumi Teien–a samurai-era garden that it now managed by the Tokyo Metropolitan Government–and the Fukagawa Edo Museum, with its wonderful replica of an Edo working class neighborhood. 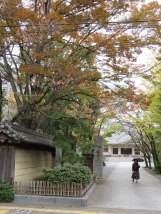 Ota finished casting the last of the six jizo in 1720.  It was installed at Eitaiji, a Shingon sect temple founded in 1624 near Tomioka Hachiman shrine.  This Fukagawa neighborhood, an area regarded as the gateway to Edo for travelers from the east on the Chiba Kaido, was Shogen’s own neighborhood.

Alas, the jizo is there no longer.  While the statue apparently sat very near the outer torii of Tomioka Hachiman shrine, it was destroyed in 1868.

In those early days of the Meiji Period, part of the effort to re-accustom people to imperial rule after more than 250 years of shogunate involved elevating the importance of Shintoism, with its close associations to the emperor.  This, in turn, required separating Shintoism from Buddhism, with the result that for a time Buddhism was actively persecuted in Japan.  Eitaiji and Tomioka Shrine once shared massive grounds, which is why the jizo was positioned in front of the shrine.  Today, even Tomioka Shrine’s grounds are diminished, and part of the former temple site is now a public park.  Eitaiji was completely closed in the Meiji Period, but has been revived with smaller precincts on the western edge of the original site, and is now associated with nearby Fukagawa Fudo temple.  It is simply no longer host of one of Shogen’s jizo. 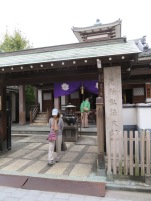 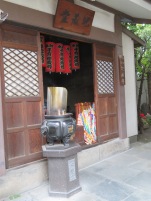 The five surviving statues, which were once covered with gold leaf that has worn away over the centuries, are among the few extant bronze statues of this size cast in the early 18th century.  All been designated as Tangible Cultural Properties by the Tokyo government, ensuring their ongoing care and protection.  Although the sixth jizo has been lost, there is a replica to be found elsewhere in Tokyo.  Be sure to check that out, too!

4 thoughts on “Six Jizo to watch over Edo”