Tomioka Hachiman Shrine sits in the historic Fukagawa district of Tokyo, a neighborhood that developed and flourished during the Tokugawa shogunate (1602-1868) when Tokyo was known as Edo.  Indeed, the history of the shrine, founded in 1627, is inextricably tied to that of Edo.

Edo began its life as a fishing village wedged between rivers at the top of Edo Bay (now Tokyo Bay).  During the Tokugawa shogunate, the village was developed into a city of concentric rings around a castle by engaging in massive land reclamation projects that left moats and waterways defining the rings.  The Fukagawa district grew in size with the land reclamation.  Indeed, Tomioka Hachiman Shrine’s gate once was on the shoreline of the bay, but land reclamation has pushed that shoreline some three kilometers south.

Although not as extensive as they once were, the shrine and its grounds are physically quite beautiful.  It must have been even more spectacular in its Tokugawa Period heyday.  Today, adorned in Heian-style vermillion and white, with a massive torii at its entrance, it exudes an air of calm stateliness.

Yet its history also includes a number of conflicts, including, interestingly, sumo matches.  The sport of sumo has close affiliations with Shintoism; many sumo rituals derive from Shintoism.

As the story goes, in the early 17th century, sumo matches tended to be casual affairs–with less Shinto ritualism–that often erupted into violence.  The Tokugawa government, in its efforts to control pubic behavior and public gatherings, banned sumo, except by special license requiring carefully controlled conditions.  When Tomioka Hachiman Shrine’s main hall was destroyed by fire resulting from a lightning strike, the shrine applied to the government for such a license, reasoning that it could hold sumo matches to raise funds to rebuild.  The matches were such a success, and so popular, that by 1684 the shrine was licensed to hold Spring and Autumn matches annually, a practice that continued until the late 19th century.

Even after sumo matches were removed to their own special arena (now Kokugikan, near JR Ryogoku Station), sumo wrestlers still regularly pray and attend ceremonies at Tomioka Hachiman Shrine.  The shrine has returned the honor by commemorating the best of the best with monuments to Ozeki and Yokozuna wrestlers.  The Ozeki monument is on the right after passing through the shrine’s main torii.  It includes the names of wrestlers to achieve Ozeki status, as well as handprints and even a stone pillar with marks indicating the height of those mountain-sized men.

The Yokozuna monument is further inside the shrine grounds, to the right of the main shrine building itself, accessible via a walkway that passes under an enclosed catwalk used by priests to pass from the shrine’s administrative building to the main shrine.  Just as the rank of Yokozuna is more recent than that of Ozeki, so, too is the Yokozuna monument a later addition, erected in 1958.  As wrestlers are elevated to these ranks, their names are added to the monuments in a large public ceremony. 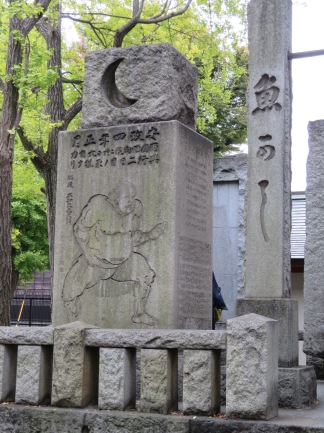 I would be remiss not to mention another more recent conflict, sad though the story is.  In December 2017, Tomioka Nagako, the shrine’s chief priest, was brutally murdered by her jealous (and by many accounts mentally ill) brother, who then also killed his accomplice wife and himself before the police arrived.  The Tomioka family had been the chief priests of the shrine for a number of generations, but this internecine conflict has apparently left the shrine in other hands.  Doubtless the shrine’s followers and the national Association of Shinto Shrines have stepped in to assure the shrine’s ability to continue its role in the community.  The serenity of the site belies this tragedy, of which no physical trace remains.

On a more positive note, look for the statue of Ino Tadataka, the surveyor/cartographer who created the first modern map of Japan in the early 19th century.  To make his map, Ino apparently walked the length and breadth of Japan.  He set out on his task from his home very near here, hence the monument.  The backdrop of his statue is his map, etched into polished granite.

Nearby is a warehouse containing some of the o-mikoshi portable shrines used in the Fukugawa Hachiman Matsuri, which takes place around August 15.  These massive gold-plated portable shrines are apparently only brought out every three years, but there seems to be at least a scaled down version of the festival every year.  Taking place in the hottest part of summer, one refreshing aspect of the popular festival is the way water is splashed on everyone as the parade passes by.

Hiding behind the Yokozuna monument is a small Inari shrine, complete with red shrine gate tunnel, and a little pond.  It’s usually empty and quiet, almost a forgotten corner of the shrine ground. 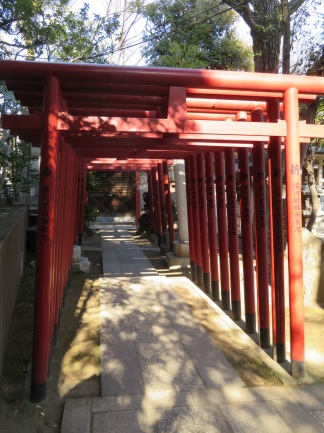 On the opposite side of the main shrine building, in the direction of Fukagawa Fudo, is a collection of small shrines housing Ebisu, the only Japanese native among the seven lucky gods.  This Ebisu is part of the Fukagawa Seven Lucky Gods walk that is particularly popular at New Years. There is also a small museum housing shrine treasures, but it’s never been open on my visits, so I can’t say anything about it.

As with many shrines, Tomioka Hachiman is also the site of many outdoor markets, including a popular antique market on the 1st, 2nd, 4th and 5th Sundays of the month (except when those days are the 15th or 28th of the month, when there is a local market instead).  I’ve scored a few treasures here over the years!

Tomioka Hachiman Shrine is regarded as one of the 10 great shrines of Tokyo (there is a pilgrimage for this) and was once more closely affiliated with the nearby Buddhist temple, Fukagawa Fudo, the two being separated during the Meiji period when Buddism fell from favor while Shintoism enjoyed a flowering due to its close associations with the position and role of the emperor.  When you’ve finished at Tomioka Hachiman Shrine, do take time to explore Fukagawa Fudo and the labyrinth of market streets between Tomioka Hachiman Shrine and the nearest subway station, Monzennakacho.  As you stroll the neighborhood, you can see various remnants of the association in the layout of the current shrine ground, the temple and the area in between.  The atmosphere will give you a real feel for old Edo, and its evolution to modern Japan.

One thought on “Tomioka Hachiman Shrine: conflicts, cartography, and other “stuff””