Ikegami, less than 20 minutes from Gotanda on the Tokyu Ikegami trainline, is a major Buddhist center, but also a bit of a hidden treasure.  Not many foreign tourists manage to get here, but they should.  As an interesting “local” neighborhood and a major collection of temples, it even beats Asakusa and its Sensoji temple (even if Honmonji is 400 years younger).  Like Sensoji, Ikegami and its temples host regular community and religious events throughout the year.  I’ve written about a number of those over the years:

Yet, even now, nearly every time I visit, I find new places to explore to learn more about this incredible area.

My search was not in vain.

Walking from Ikegami Honmonji, as the lane bends to the left just beyond the grounds of Eiju-in, I found a large tomb surround by a dry moat. 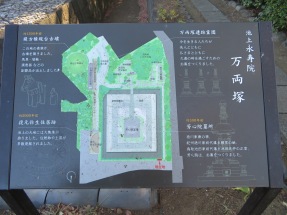 This was a structure about which I knew nothing.  It turned out to be the tomb of Inabahime (1631-1708), a granddaughter of Tokugawa Ieyasu.  In 1691 she took tonsure as a nun at Eiju-in and construction of this tomb for her was commenced (even though it was not a usual practice in Japan for tombs to be built prior to the death of the individual).  Apparently the tomb had fallen into disrepair and it was in 2005 when Eiju-in decided to restore it and build some new grave sites nearby that the archaeological site was discovered.

Many of the treasures and relics found during the excavations are now kept inside Eiju-in, as I described earlier.  But a partial foundation of a Yayoi Period dwelling from 2,000 years ago has been preserved in situ.  (That’s right; people have been living on this hill for over 2,000 years.)  The foundation is partial because part of it was destroyed during the 17th century to make way for the dry moat of the Tokugawa tomb. 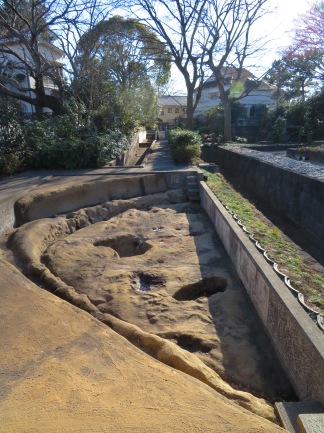 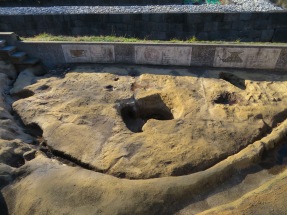 There is also a cut-away area showing layers created by the ages, including even a layer of ash from Mt. Fuji’s most recent eruption in 1707 and a layer of refuse from the 1970s.

Back in the farthest corner of the site I found the remnants of a 6th century kofun burial mound.  In a semi-circle mirroring the shape of the mound are the new grave sites, some of which are already occupied.  Walking past them I didn’t immediately realize that the configuration is set to define for former outer edge of the kofun, but once I looked closely it was easy to see.  A couple of haniwa guardian figurines add to the authenticity of the site. 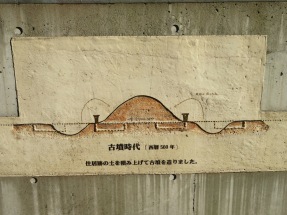 On this “back” side of the Tokugawa tomb, I also found a bridge over the dry moat, enabling me to walk right up to the center of the tomb site.  A sign board explained that the tomb was now surrounded by a small botanical garden containing 11 varieties of flowering plants.  Alas, they only bloom between March and November.  (Good excuse to return later.)

The final surprise of the site was a “water harp” (mizu-goto).  This is a drain belong a water basin.  The drain has been designed to make a  musical gurgling sound as water drains away.  The sound is best when you put your ear to a bamboo tube embedded in the drain. 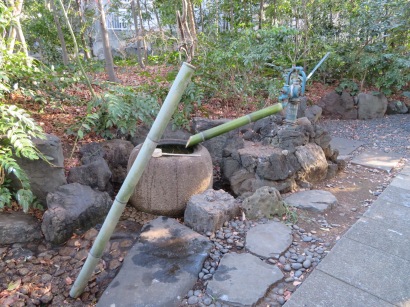 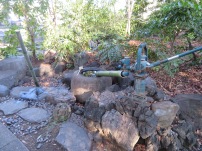 Because this is a remote corner of the hilltop, removed from the main temple of Honmonji, it seems to see few visitors.  But now that I know it’s there, I’ll visit again to explore further.  And I hope other visitors to Honmonji take an extra half hour to do the same.  It’s well worth it!