If you are strolling in the Ginza/Yurakucho area of Tokyo or even riding a JR train heading south from Tokyo station, chances are that you will notice the striking shape of the Glass Building of the Tokyo International Forum.  Some seven stories tall, most of it a “sundrenched atrium”, its super-structure resembles the ribs of a ship, floating above the city. 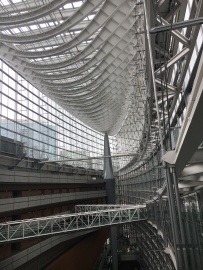 While many visually attractive buildings have been added to the Tokyo skyline over the last two or three decades, most of them are not all that accessible to the public.  They can be admired from the outside only.  Not so with the buildings of the Tokyo International Forum, which is a convention and arts center where there is always something to see and do.  The Forum is host to about 4,000 different events each year, attracting about a quarter of a million visitors.  It will even be a Tokyo 2020 Olympics venue — for wrestling.

You will note that I said “buildings”, plural.  There are two main buildings in the complex, built on the site of the former Tokyo Metropolitan Government headquarters (now relocated to Shinjuku).  The building on the west–some would say this is actually four separate structures–contains a number of major concert and exhibition halls.  It is separated from Glass Building G by a leafy outdoor plaza at street level but the two buildings, and the various halls, are connected through an underground concourse as well as a series of overhead catwalks.

The plaza itself is host to various public events, including a summertime beer garden, and a very popular antiques market on the first and third Sundays of the month. 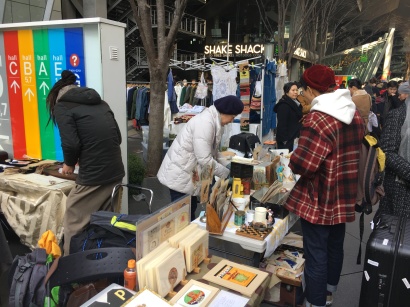 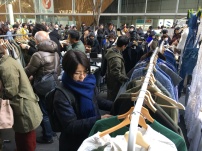 The plaza level and the basement level also feature a number of restaurants, coffee shops and other food outlets, as well as an art museum.  A few restaurants can also be found in the upper levels of Glass Building G.

Of course the concert and exhibition halls are interesting, especially when events are being held, but it is Glass Building G that is the real star of the site.  Take the elevator up to the top, check out the view and then walk down, crossing a few of those spectacular catwalks along the way. 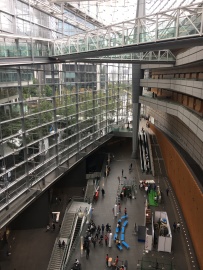 There is often some kind of special public exhibition in the “Lobby Gallery” on the basement level of the atrium and these exhibitions are usually worth checking out, too.

Now through January 15, 2019, as part of “J-Culture Fest”, a series of music and art events at Tokyo International Forum celebrating traditional aspects of Japanese culture, the Lobby Gallery is hosting a display of historical Japanese imperial court lifestyle, in honor of the upcoming accession to the Chrysanthemum Throne by Crown Prince Naruhito upon the abdication/retirement of his father, the Heisei Emperor, on April 30 this year.

The exhibition features displays of Heian Court life, as described in the Japanese classic novel, Genji Monogatari, which was written in the early 11th century.

There is also a diarama model of the enthronement ceremony of the Taisho Emperor (grandfather of the current emperor), which gives us some idea of what we might expect to happen in April. 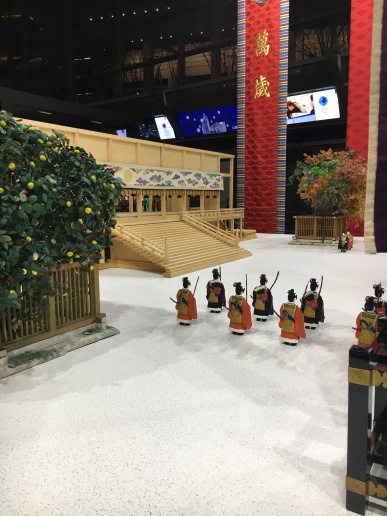 Displays of the court costumes worn during the enthronement ceremonies reveal just how deeply rooted in the Heian Period (794-1185) are the imperial customs and practices. 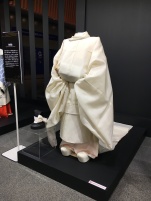 Court garb for both ladies and gentlemen for the Nara, Heian, Edo and Meiji Periods are also displayed, showing an evolution from Chinese style garments to the distinctly Japanese style we see today (especially in the case of ladies wear). 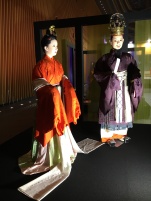 The Tokyo International Forum has not forgotten its roots as the former site of government for the city of Tokyo.  There is a stone marker at the north end of Glass Building G commemorating this bit of history.  Just inside the building is a statue of Ota Dokan, the samurai engineer who oversaw the construction of Edo Castle in the 15th century.  His statue faces the walls of Edo Castle, now the Imperial Palace, starting just a couple hundred meters away.  The statue is flanked by displays on Ota’s life and his efforts to build the castle.

Among the things you cannot see are the buildings’ eco-friendly design and construction.  The complex uses solar power and solar heat, natural ventilation at the top of the Glass Building (especially in summer), roof greening, waste water recycling and other energy saving techniques to make it an environmental leader.  Stand back to admire the structures, and you will sense the presence of these invisible features as well.

If you’re in the area, I definitely recommend taking a bit of time to poke around.  You will soon discover that it is a popular public space as well as an interesting merger of history and modernity.

One thought on “Tokyo International Forum: a different kind of community center”