New Year’s Day 2019 in Tokyo dawned clear and relatively warm (high of 11C/52F), perfect weather for getting out for a little excursion in search of some luck for the new year.  My favorite such activity is a seven lucky gods pilgrimage.  It is said that the seven lucky gods sail into harbor on new year’s morning in their lucky boat, making them particularly relevant at new year’s, and Japan is replete with pilgrimage routes to honor these lucky seven.  I’ve written about a number of these delightful neighborhood explorations and encourage everyone to give such walks a try.

For my New Year’s Day excursion, I chose a pilgrimage in Ota-ku: the Tamagawa 7 Lucky Gods. This is a relatively short walk, about 4.5 km., and was developed only a few years ago (compared to many that are Edo Period routes), yet it is rooted in local history.  The walk can be completed as quickly as 90 minutes, although I don’t recommend being in such a rush.  Click here for a map in Japanese to help you see just how compact it is.  Won’t you join me?

The route begins from Nitta Shrine, a three minute walk from Musashi Nitta (turn left as you exit the wickets) on the Tokyu Tamagawa line that runs between Kamata and Tamagawa.

The story behind the founding of Nitta Shrine is a rather unusual one.  During the 14th century, Japan had rival courts, one in the south and one in the north.  Needless to say, this resulted in armed confrontations as each side struggled to gain precedence.  In 1358 a samurai warrior named Nitta Yoshioki was set upon and killed while making a ferry landing at Yaguchi on the Tama River, about a kilometer from the site of the shrine.  Yoshioki’s murderers, as well as those living in the area, were haunted by his spirit and sought to exorcise the curse by arranging for the founding of Nitta Shrine 660 years ago.

Nitta Shrine is now one of the largest shrines in this neighborhood and proved to be a popular spot for hatsumode, the first shrine visit of the year.  People were lined up around the corner and down the street, waiting for their turn to worship at the shrine.

Inside the shrine grounds, to the left of the main shrine structure, a small stall was set up selling amulets, new year’s sake, and a “kit” for your 7 lucky gods walk.  Although you can do the walk any time you like, the kits are only on sale from 10:00 to 17:00 through January 6, 2019.

The kit (JPY1,000)–packed into a paper shopping bag–includes a map of the walk, a paper model of the seven lucky gods and their lucky boat, a second map of the area prepared by the local merchant’s association noting shops in the area selling hand-crafted goods, a pamphlet about the “community bus”, and a shikishi. 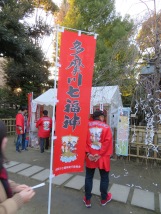 The shikishi is a square card, about letter-sized, on which is printed a picture of the lucky seven on their boat and their names, together with the name of the shrine or temple on the pilgrimage with which the god is associated.  This is a self-service pilgrimage.  There is a stamp and stamp pad at each of the designated seven shrines/temples and pilgrims are expected to stamp an image of each god next to its name at the relevant stop, as shown in the model below.  I goofed on my first one and stamped over the name of the god rather than next to it, so I just continued that practice throughout.  I was assured this would not have a negative impact on the luck I was earning through my walk. 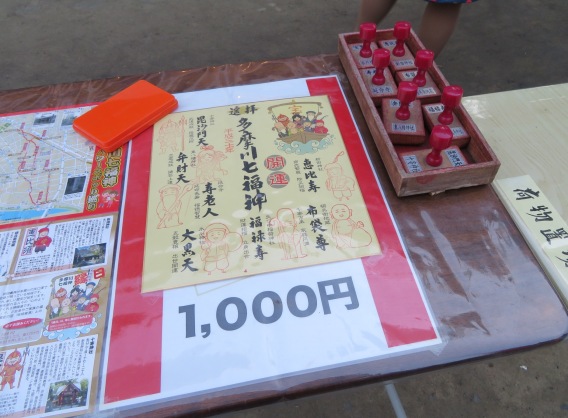 All seven stamps are available at Nitta Shrine, so you can complete your shikishi on the spot, if you want to.  Don’t worry if you don’t read Japanese.  Those pattern recognition skills you developed in pre-school (or law school, depending on your educational background), will enable you to put your stamps in the right place.  Or you can always ask a fellow pilgrim for help.  This is a popular pilgrimage; lots of people were strolling the neighborhood sporting the bag the kit came in: couples, friends, families, solo travellers. Everyone seemed to be enjoying themselves.

The god featured at Nitta Shrine is Ebisu, the only indigenous Japanese god of the seven.  He is the god of commerce and fisheries, and is usually depicted holding a fat, red fish and a fishing pole.  You can buy a fortune tucked into the tail of a paper-mache red fish here, too (JPY300).

The map in your kit recommends a particular order in which to visit the sites and collect your stamps.  Whether you follow that order or change things up, you will find yourself walking through a quaint neighborhood in the process of modernizing.  You’ll see some houses and apartment buildings that are decades old, right next to obviously much newer (21st century) construction.  You’ll also see lots of small shops and restaurants of the kind that are slowly fading from existence as franchises come to the fore across Tokyo.

One interesting feature of this neighborhood is its industrial roots: as you get closer to the river you’ll see lots of small “factories”.  Most are not operating during the new year’s break, but a forklift here, a barrel of metal shavings there, give them away.  I even saw a small distribution center, its delivery trucks neatly parked in a row.

The map is detailed and easy to follow.  It helps that red flags flutter in front of each stop on the course, announcing the location. 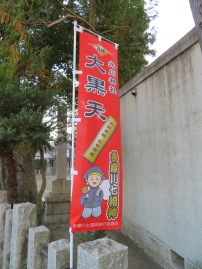 Stop #2: Tonbe-e Jizo – This tiny structure nestled between two gnarled old trees (the cherry on the right must be spectacular in spring) would be easy to overlook on an ordinary day.  It is the home of the Tonbe-e Jizo. Jizo is a Buddhist deity said to watch over travellers and children.  This one has blurred facial features–supposedly because the vengeful spirit of Nitta Yoshioki caused them to melt off.  The god whose stamp you collect here is Hotei, the god of happiness and contentment, regarded as a special protector of children.  Because this is such a small site, the stamp and ink pad are inside the white plastic box on a stand in front of the shrine, protected from the elements.

Stop #3: Yaguchi-naka Inari Jinja – wedged into a little nook next to Musashi-Nitta station is tiny Yaguchi-naka Inari Jinja.  The stamp to collect here is for the god Fukurokuju, again sheltered in a white plastic box.  The god of fortune, happiness and longevity, he is known for his ability to perform miracles, even bringing the dead back to life.  Does he also help the spirit of Yoshioki to rest, perhaps?

Stop #4: Hikawa Shrine – most of Hikawa Shrine’s original grounds has been given over to a playground, but the main shrine is still shaded by large trees (it is said that Shinto shrines are always meant to exist in forests, so even very small shrines usually boast at least one tree).  The god here is Daikoku, the god of wealth, farmers and the kitchen.  A small Inari shrine next to the main shrine underscores this function.

Stop #5: Enmeiji temple – this serene, well-tended temple ground is the perfect place to find Jurojin, the god of longevity. 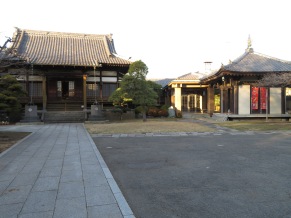 Stop #6: Azuma Hachiman Jinja – founded in 1250, this venerable shrine sits just below the Tama River levee bank, near the site of the former Yaguchi Ferry landing.  Here you can get a stamp for Benten, the only female of the lucky seven.  She is the goddess of music and fine arts and is usually found near water, hence her affiliation with this riverfront shrine. 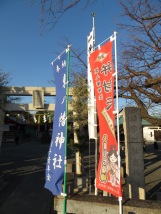 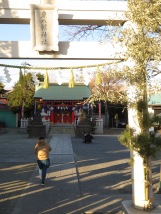 After your visit to Azuma Hachiman, be sure to climb up onto the levee bank.  There is a stone marker on the site of the former ferry landing and, if you’re lucky, you might also see Mt. Fuji in the distance.  As it gets later in the day, this likelihood rises, so you may want to consider swapping the stop order to make this your last stop of the day. 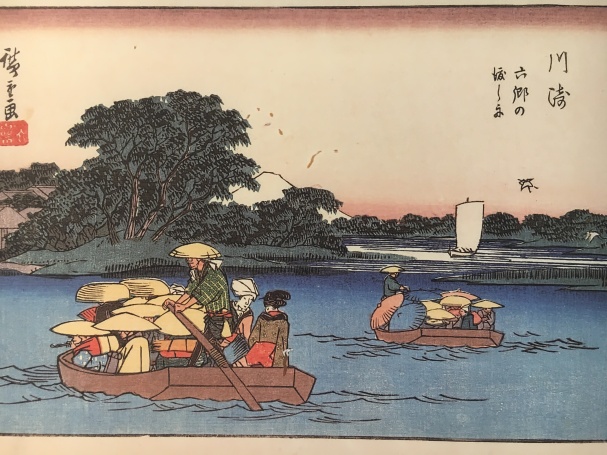 Stop #7: Jikki Shrine – from the street this little shrine looks a bit like a tiny cottage, surrounded by larger buildings with a narrow car parking area in front.  Thankfully the red flags help identify the stop.  Though small, it is obviously a well-loved shrine, yet another affiliated with Nitta Yoshioki and his retainers.  The god here is Bishamonten, the god of war and warriors. 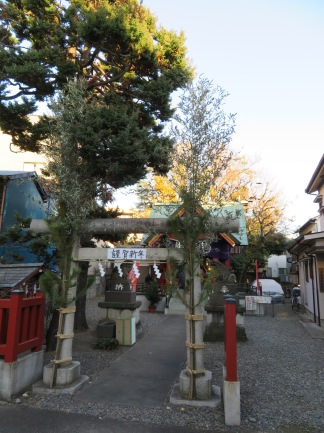 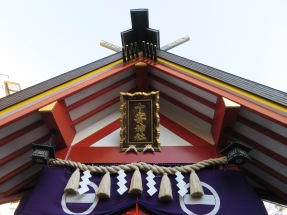 Now you’ve collected luck from all seven of the lucky gods, setting yourself up for a positive year, if you can just find your way back to the train station…