Old Edo was a firetrap. One and two-story structures, made mostly of wood, straw and paper, standing cheek-by-jowl with the neighbors, with everyone cooking and heating with open fires or charcoal braziers. Any little fire quickly got out of control and equally quickly spread to neighboring structures. Major fires were so common in the Edo Period (1603-1868) that they had a special name: “the flowers of Edo”.

In these conditions, a good fire brigade was essential. The fire brigades of Edo were largely comprised of entrepreneurial thugs, but they were often quite effective.

In labyrinthine Edo, with its narrow and twisting laneways, it was first necessary to find the fire. That wasn’t always easy. The most reliable method was to get some elevation.

Although fire-fighting in today’s Tokyo has changed dramatically from those days, the ladder-top contortions involved in signalling have survived as hashigo-nori — acrobatics performed atop a bamboo ladder. 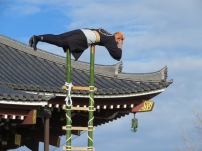 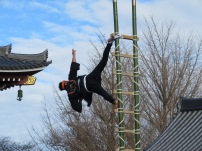 You can see it for yourself this Monday afternoon (January 8, 2018) at Tokyo’s Ikegami Honmonji temple.  The acrobatics will be held from 1 pm to 2:30 pm in the temple courtyard.  Admission is free.

The event begins with a procession of the “firemen”, members of local groups who practice hashigo-nori.  Clad in traditional garb and led by members twirling matoi poles, the acrobat/firemen carry their bamboo ladders and pass through the temple’s sanmon gate to enter the temple courtyard. 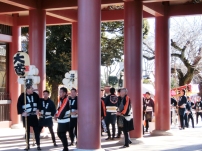 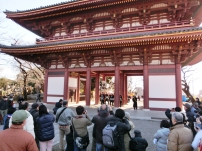 The matoi carriers then give a performance of their prowess with these big poles.  Matoi are topped by a three-dimensional logo identifying the fire brigade with long strips of white canvas attached, which twirl and snap as the carrier twists the pole while raising and lowering it.  Matoi were a part of the fire-fighting gear, insofar as a firefighter would climb onto the roof of the burning building or a nearby building with a matoi and raise, lower and twist it to attract the attention of his colleagues and draw them to the location of the fire. 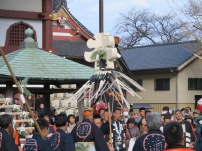 Next it is time for the ladder to be raised.  Members interlock multiple hooked poles to steady the bamboo ladder once it is vertical. 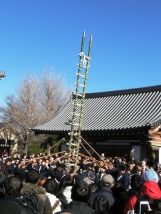 One by one different members scramble up the ladder and begin to strike various poses, each with historical  meaning.  Sometimes their movements are so precipitous and dramatic that the spontaneous oohs and ahs of the audience are almost as entertaining as the acrobatics themselves.

In some cases, two or even three men will ascend the ladder and work together to strike poses.  Very obviously these men have great trust in each other. 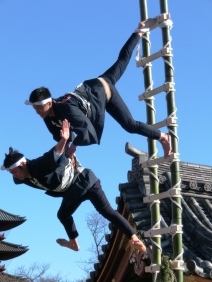 The size and shape of the Ikegami Honmonji temple courtyard makes it possible to get in close to the performance, something that is not always possible with “hashigo-nori” performances.

Announcements and explanations are made in both Japanese and English. And, at the end of the performance, treats are thrown down to the audience below. Then members of the audience are invited to take photos with the acrobats or attempt some of the acrobatics on a “mini” ladder–particularly popular with small boys. 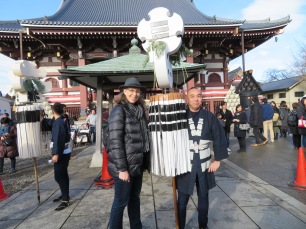 From 2:30, there will also be English language guided tours of this historic temple’s precincts; inquire at the tourist association marquee.

Ikegami Honmonji is less than a 10-minute walk from Ikegami Station on the Tokyu Ikegami line.  There will also be an open air market at the base of the hilltop temple’s staircase approach all afternoon, allowing you to make a day of it.