Not long ago a Japanese friend was telling me about a book he was reading that detailed how Japan historically observed seasons in two week increments.  Japan’s love of the seasons is undeniable and when I reflected on what my friend was explaining to me, in some ways, I could see it.  In particular, it is clear that new year’s is celebrated in a two week season.  The celebrations culminate on Coming of Age Day, traditionally January 15, but more recently moved by the government to the second Monday of January for administrative ease.

I’ve written before about New Year’s eve observances and Seven Lucky Gods walks that are meant to be completed during the first two weeks of the year. I’ve also written in the past about how Ikegami Honmonji temple ends the new year’s celebratory season with laddertop acrobatics.

In fact, at Ikegami Honmonji temple there is more to the Coming of Age celebrations than just laddertop acrobatics.  The organizers created a fair-like atmosphere with a morning market and several other activities.  The event is mostly attended by locals, although  a few foreigners in the know were there as well.  In spite of being such a major Buddhist temple, similar in size to the Asakusa Kannon temple that foreign visitors flock to, Ikegami Honmonji remains, for the most part, off the beaten tourist track. 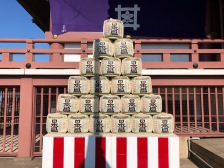 Just outside the temple’s lower gate was a reception area for people who were doing a local seven lucky gods walk around the Ikegami area.  Those who could show they had completed the walk got to draw a number to get a commemorative gift.

Open-air markets around temple gates were once commonplace, but the practice has waned in favor of market streets, malls and big box stores.  At Ikegami Honmonji, plant markets are held regularly but the market on Coming of Age day when even further.  There were stalls selling fresh produce and stalls selling stationary, handicrafts, food and even craft beer produced in Ota-ku. 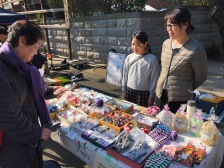 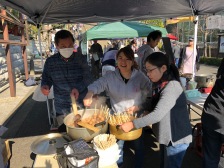 Surprisingly, there were also out-of-town vendors selling products from far flung prefectures like Yamagata in the north and Kochi on the island of Shikoku.  And a little stall giving away cups of warm green tea.  Overall, it was a very festive atmosphere. 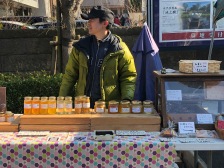 One of the new year’s customs observed as part of the fair was the lion dance.  This custom has probably evolved from the elaborate lion dance observed at Chinese New Years, but is a much simpler affair.  Rather than two people in the lion costume as in China, the Japanese lion is portrayed by a single person wearing a green cape and a red lion mask with flowing blonde mane and a mouth that opens.  The “lion” snaps his jaws over someone’s head to “eat” any bad luck around them, leaving them with only good luck for the year. 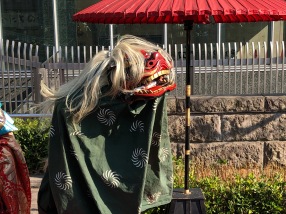 At Ikegami, the lion was accompanied by Ebisu and Daikokuten, two of the seven lucky gods.  Daikokuten also shook his lucky hammer over people’s heads to similarly bless them with good fortune.  First these three characters just posed for photos, often with by-standers who wanted to be photographed with all that luck on the hoof.  Later, they would dance up a storm. 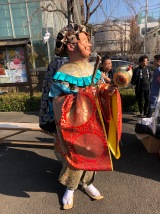 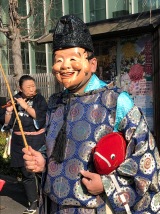 But first, Hiroyuki Kimura, a local artist and sumo commentator, gave a public demonstration of sumi-e ink drawing.  Using massive brushes and a huge piece of paper, along with two tones of ink: black and gray, Kimura painstakingly added swathes of ink and delicate lines. 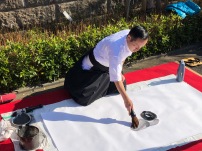 Slowly, before our very eyes, an image began to emerge. 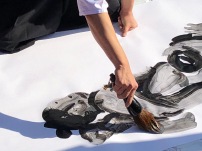 Finally we could all see the dramatic scene of a one sumo wrestler throwing another out of the ring.  It was quite a performance and produced quite a piece of art. 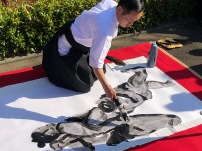 Next came the lucky lion dance, accompanied by fife and drum. 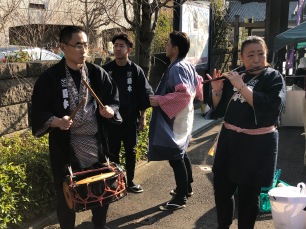 Two lions danced, moving their heads around in playful poses.  One even played catch with a mikan. 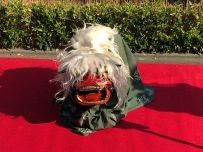 The lions then took a back seat to other masked dancers, including the lucky gods.  The watching crowd was blessed with plenty of good fortune. 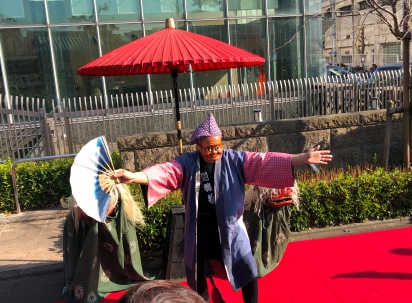 The final event of the day was the laddertop acrobatics, with its usual effect: gasps and squeals from the audience as these men high atop a bamboo ladder seemed to defy gravity as they posed. 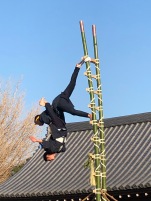 With this delightful day at an end, I feel that the new year’s season has also finished and the next two week “season”, settling into winter, has begun.