On a windswept hilltop north of Kyushu’s Mt. Aso caldera, one of the largest volcanic caldera in the world, there stands a bunch of giant boulders.  They seem to be arranged in two somewhat straight lines, with a couple of clusters of boulders off to one side. There is nothing else around but grass and the odd bit of scrub.

Some archaeologists believe that in the time when the caldera was a giant crater lake this northern rim of the caldera, the flank of the earlier volcano, was the site of human settlements.  Some people believe that these boulders were moved onto this hilltop by those early humans and laid out into a pattern for purposes of some sort of religious observance.  Some geologists suggest instead that the boulders are the product of a particularly tough strain of lava flow, less susceptible to erosion than that around it.

Being a prehistoric site, we may never know for certain.  What is certain is that it is a fascinating spot.

Driving up the hill to the Oshito Ishi stones, the first thing one sees is a great lump of stone, a megalith with a pointy peak, sitting atop the hill. 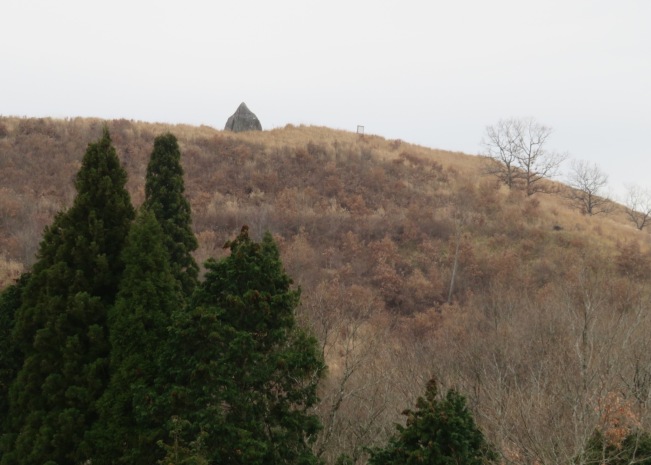 Drawing closer, there’s a small hut and a parking lot.  Pay your JPY200 admission fee at the hut and receive a brochure and a compass.  A compass, you say to yourself.  But I can see the stones, just above me on the hill.  What are the chances I’ll get lost on the way up? 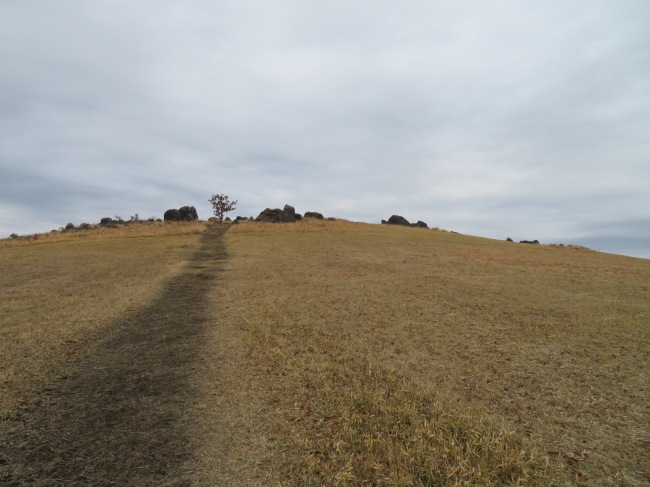 The attendant explains that you need the compass when you get to the “Sun Stone”, the largest of the Oshito stones.  She advises to watch the compasses needle while walking around the Sun Stone, which is 5.5 meters (18 feet) tall and 15.3 meters (50 feet) in circumference.  The mystery of this desolate place deepens.

After a walk around the hill and up the well-trodden path, the stones alluring on the hill above you, you will reach the first clusters of these massive igneous boulders.  There is little about the shapes or placement of the stones that would lead one to conclude that they were placed here by humans. In fact, one local legend has it that the boulders were used as marbles by giants, playing in the night. 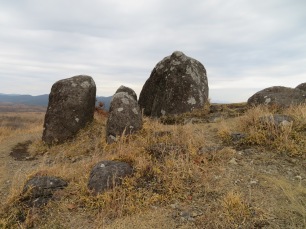 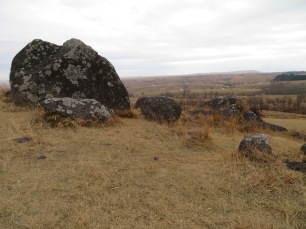 This hilltop is the highest spot around, so even as visitors are confronted with the mystery of these stones, they are also awed by the panoramic views: the Kuju-Renzan Massif to the east, the Aso volcanoes to the south and rolling hills in every direction. 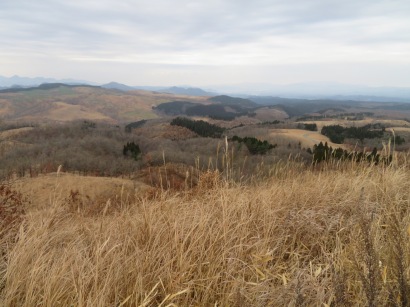 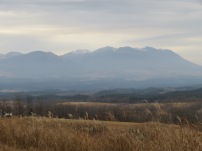 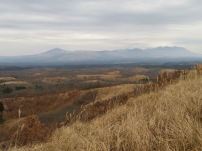 From the initial cluster at the top of the path, there is a jagged line of boulders leading northeast, roughly toward the Sun Stone. 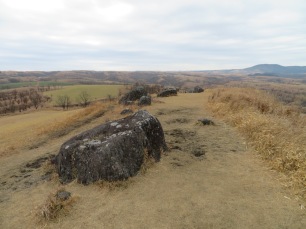 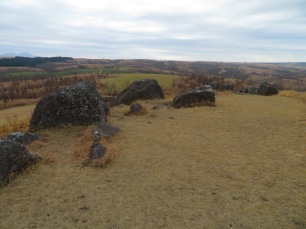 The Sun Stone is a massive and distinctive megalith. With its unusual pointy top, one cannot help but feel that perhaps human hands did indeed shape it. Following the instruction of the ticket attendant, I watch the compass needle as I walk around the stone.  At first, the needle continues to indicate north as I move.  But then, about 1/3 of the way around, the needle does a 180 turn, pointing south instead.  And as I keep moving, it flips itself back, so that by the time I return to my starting point, it is again indicating north.  Weird.  I make three trips around the stone, watching closely, trying to figure out what’s going on.  I cannot work it out.  The nearest I can tell, there must be something magnetic inside the megalith that temporarily discombobulates the compass. 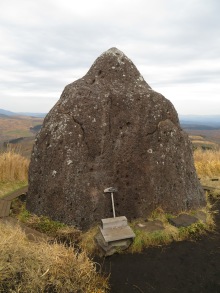 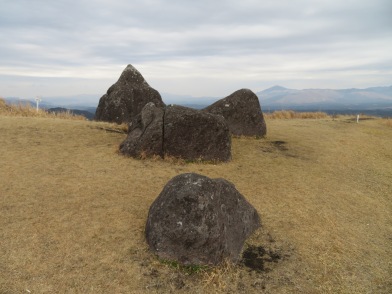 If north is 12 o’clock, extending from the Sun Stone at roughly 6:30 is another line of stones.  The line is not straight, nor is there anything uniform about the stones that form it, but it is a discernible line. The boulder nearest to the Sun Stone has edges that imply it has broken off the Sun Stone and fallen to where it lay.  All of these conditions indicate that this is a natural formation, the result of volcanic flow and erosion as the geologist at the Aso Volcano Museum suggested.  Yet, many locals want to believe the formation is man-made.

Referencing the above “12 o’clock”, the line that one follows from the initial cluster to the Sun Stone is at 8 o’clock.  Those who postulate that this is a man-made formation maintain that an invisible line continues northeast from the Sun Stone through Shikoku and Honshu, running through the Hida Takayama Megaliths in Gifu Prefecture and Nikko in Tochigi Prefecture.  This line is known as the “Sun Road”. 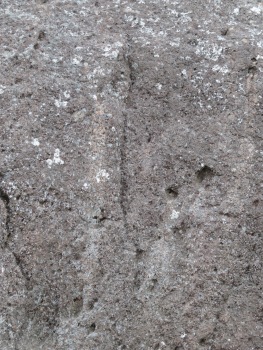 “Water Road”. Because of this intersection of “roads” on the Sun Stone the advocates for man-made formation also argue that Oshito Hill is a “power spot”.

Other evidence cited by the advocates of the man-made formation theory include the number of petroglyphs they see carved into the stones, rudimentary line drawings.  Some are more visible than others, although all are severely eroded. Of course, their presence is not evidence that the stones were placed here by humans; it is only evidence of the fact that humans subsequently chose to carve markings into the stones.  That these stones have long been, and continue to be, regarded as a sacred site is undisputed.

One last rock formation that commands particular attention are the so-called “hasami-ishi” (pinching stones).  They are two megaliths with a gap between them.  Apparently the setting sun shines through this gap on the summer solstice, a time piece equivalent to Stonehenge. 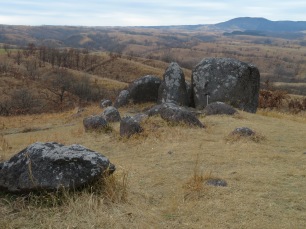 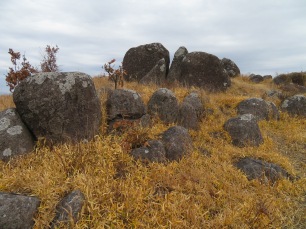 It’s impossible to know whether these stones are the product of natural erosion or were somehow carried to this desolate hilltop by prehistoric humans and arranged in their current positions.  But however they got there, they are amazing formations in a starkly beautiful setting.  (BTW, the mountain visible in the distance in the photo on the left below is the erupting Nakadake of the Mt. Aso volcano.) 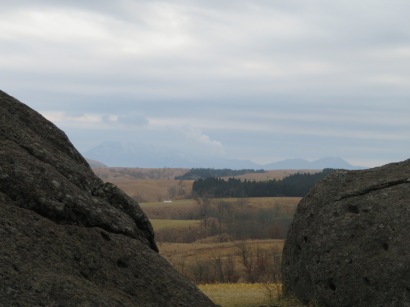 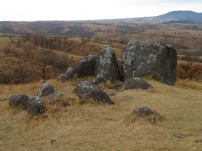 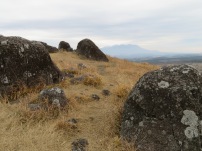