Unlike many Japanese, who rise early on New Year’s mornings to watch the sunrise on the new year, I’ve always preferred seeing in the new year with a traditional hatsumode shrine visit promptly at midnight.  This year’s hatsumode was a particular treat, as it included some very special entertainment.

This year I was fortunate to be able to visit Kirishima Jingu in Kagoshima Prefecture.  Kirishima Jingu was built to honor the god Ninigi-no-mikoto, who was sent to earth by his grandmother, the goddess Amaterasu Omikami (lit. The Great Goddess Who Lights the Heavens), to bring rice and peace to humans.  Ninigi, who went on to become the progenitor of the Japanese Imperial House (his great-grandson, Jimmu (711-545BC), was Japan’s first emperor), is said to have descended from the heavens to Takachiho. 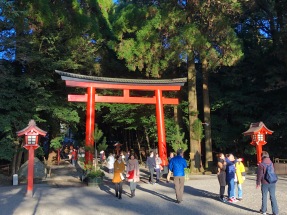 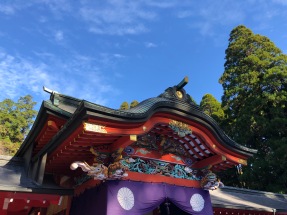 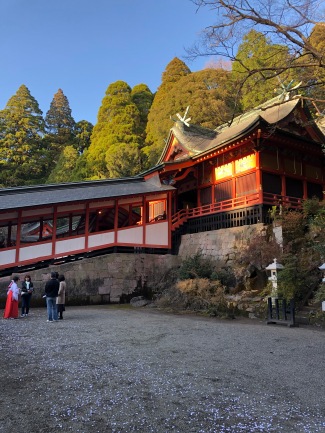 While there are two places in Kyushu bearing the name Takachiho, Mt. Takachiho in the Kirishima volcanic cluster, is generally accepted as the place where Ninigi reached the earth. Kirishima Jingu was built on Mt. Takachiho to honor Jimmu and his descent from heaven (known as Tenson Korin).  Unfortunately, earlier versions of the shrine, built higher up the mountain were destroyed by fires (including from volcanic eruptions), so that the shrine was relocated down the mountain little by little over the years until being built in its present location in 1715.  Fear not, it is still fairly high up the mountain it exists to honor, so much so that at midnight on New Year’s Eve the temperature was -3C (26.6F).

Although I know it is impossible (ie, not permitted) to approach a shrine before midnight on New Year’s Eve, I usually try to reach my hatsumode objective by around 11:30 pm to try to be ahead of the worst of the crowds.  While Kirishima Jingu is a major shrine, representing as it does the earthly founder of the Imperial family, it is also relatively regional–dare I say, even rural–, so I didn’t think it would be too crowded. 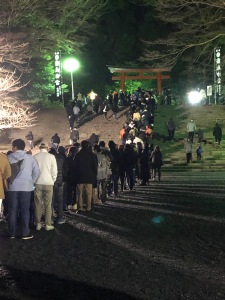 ell, it was crowded enough that I wound up parking about a 20 minute walk from the shrine entrance, in a “seasonal” parking lot opened just for this occasion, with traffic directed by a multitude of “seasonal” parking attendants, too.  Nonetheless, by 11:45 pm I had reached the central courtyard about 100 meters below the main shrine.

At the far end of the courtyard a small crowd was gathering in front of a makeshift stage and some torchlights. This was really what I had come to see, so I found myself a spot as close one of the warming torches as I could manage and settled in to wait. 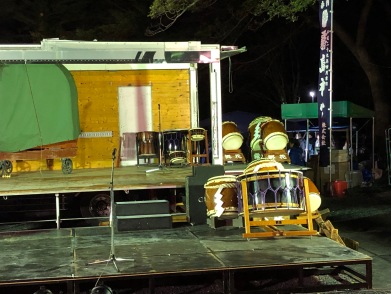 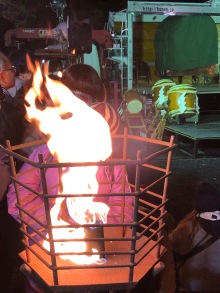 At one minute to midnight, the drum troupe we had all been waiting for assembled on the stage and bowed.  Someone in the line waiting to approach the shrine counted down: “7, 6, 5, 4, 3, 2, .”  One of the drum troupe stepped up to a microphone: “Akemashite omedeto gozaimasu” (Happy New Year!).  We returned the greeting and bowed.  She continued, “We are the Kumen-daiko troupe and we’re here to entertain you tonight.  But before we begin, please turn to face the shrine and pay your respects.”  We dutifully turned, bowed toward the shrine as one, and then turned back toward the stage.  The troupe retired, with only two men remaining on the stage. 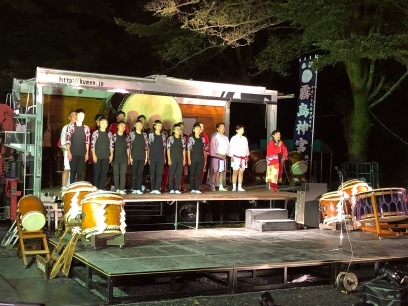 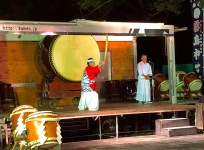 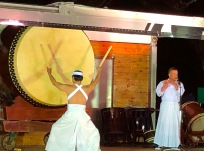 First the man standing at the o-daiko (the great drum), gave the drum three long slow beats with a long curved pole that more resembled a Japanese katana sword that a drum stick.  Then as he shed his red jacket (one got the impression he was planning on working up a sweat, notwithstanding the frigid temperature), his companion began to play a wooden bue flute.  The contrast between the low tones of this giant drum and the high pitched whistle of the flute set an “other worldly” mood.

Of course, that was the point.  Drums in all societies have served a number of functions over the millenia, not least to emulate the thunderous sounds that humans often attribute to the voices of the gods.  And for the next hour, we were treated to those thunderous sounds, performed in perfect synchronicity.  (Note:  there are those who say that the point of drumming like this isn’t to emulate the gods but to make enough noise that they will hear it.  One can’t argue with that reasoning either.)

There were a number of performances by different combinations of members of the troupe. 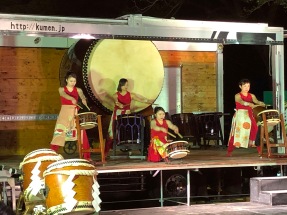 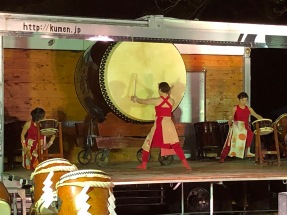 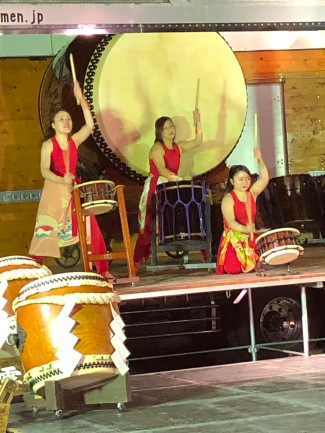 The great drum not only dominates the stage itself, but also many of the performances.  In one number, both sides of the drum were beaten, with perfect timing, even though the two drummers could not see each other. 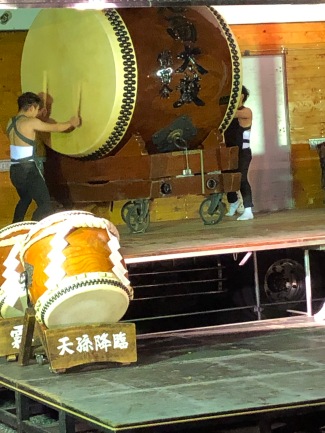 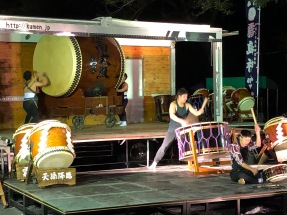 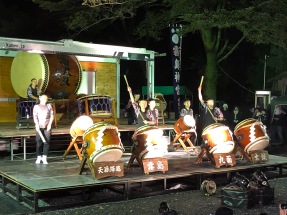 Often the bue flute provided the thread that held the drumming rhythms in place.

Besides the power of the drumming, it is mesmerizing to watch.  The synchronized movements of the drummers contribute to this, as does the way in which their movements are almost dancing.

The culmination of the performance was a number recounting the story of Ninigi-omikoto’s descent from heaven, together with an entourage of minor deities.  He also brought the sacred jewel, mirror and sword that are now the official Imperial regalia, as well as rice seedlings, as it was part of his mission to introduce rice cultivation.  To depict all of this, the drummers wore masks, replicas of antiques that are part of the shrine’s most treasured possessions.  It is often said that those who wear sacred masks become the gods they are portraying, at least for the duration of the performance. 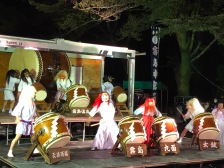 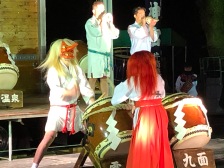 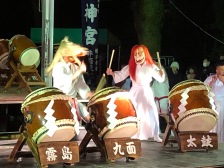 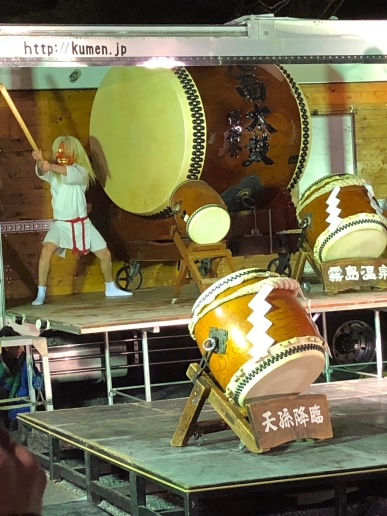 By the end of the performance, there were nine masked drummers on the stage performing (see top left photo above).  The troupe’s name, “Kumen”, means “nine masks” and this final number is their signature performance, for which they are most well known.

This troupe began in 1975.  While they are local to the Kirishima area, they have performed across Japan and in several countries overseas, including the U.S. and Australia.  But every New Year’s Eve for the past 48 years, they have been right here in the lower courtyard of Kirishima Jingu, performing with their masks and honoring the gods.  I found it an honor to be able to watch them.

By the time the performance had finished, just after 1:00 am, I felt nearly frozen.  Still, I managed to make my way to the shrine (there was still quite a long line) for hatsumode.  Once people have said their prayers, their attention turns to buying fortunes and amulets to see them through the year to come.  Consequently, the shrine was doing a roaring trade in these goods. 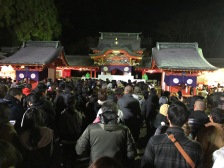 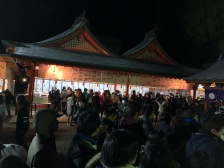 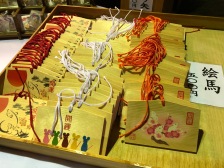 After watching the stirring performance by the Kirishima Kumen Daiko troupe, I didn’t feel I was in need of any additional amulets to see me through the new year.  I feel empowered to make the coming year a good one.  I hope the same for you!

One thought on “Myths in the mountains at midnight”