In the West, many people associate stone-related art with great masculine sculptures such as Michelango’s ‘David’, the Renaissance, and other famous names such as da Vinci and Donatello. Whilst these sculptors focused on realism, Japan was focusing on creating abstract works using the same canvas (in fact, at the same time and in a few cases long before the Renaissance).

Karesansui (lit. dry landscape garden) or Japanese rock gardens/Zen gardens are judicious arrangements of rocks, gravel, water, moss and plants that are used to emulate nature. Most Zen gardens are relatively small and are meant to be viewed from a single viewpoint, outside of the garden. 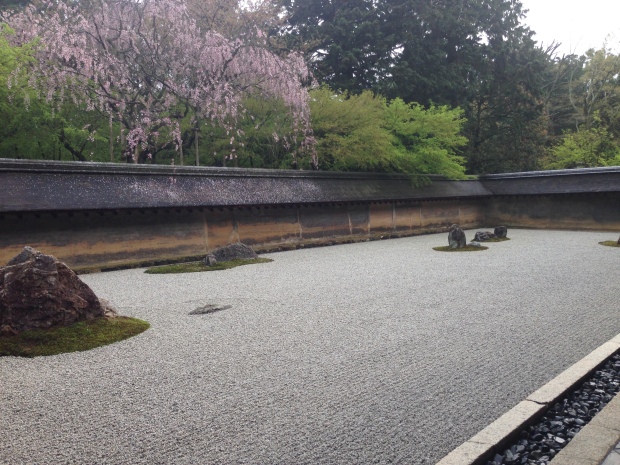 As in the above example if Kyoto’s Ryōan-ji, most Zen gardens can be viewed from the Hojo (the residence of the chief monk) and are thought to have been used as an aid to meditation. Many Zen gardens were created at Zen Buddhist temples in Kyoto during the Muromachi period (circa. 1350-1550) but early prototype Zen gardens date back as far as the Heian period (circa. 800-1150).

White sand and gravel denote several meanings in the Shinto religion including ‘purity’, and often represent flowing water.  This is once reason these garden components are raked in smooth, continuous lines. The untroubled guidance of these stone rivers, aids in directing the mind so that poise and Zen can be cultivated.

A Zen Garden leading up to the temple steps to the Hojo at Hokokuji, Kamakura

Similarly the moss used in Zen gardens has a variety of suppositions. The most common interpretation is that the moss represents land covered by a great forest. In my mind this is a depiction of early Japan, in which islands and great swathes of coastline were densely packed with forests, and were surrounded by a seemingly untraversable ocean.

Outside the Kansai region, it is difficult to find Zen gardens. This being said, some Kamakura temples feature small Zen gardens (Hase-dera and Hokokuji to name a couple). They are tranquil places of calm reflection that let your mind float above the rock, but not in a hard place!

2 thoughts on “The Zenith of Stone”