Japan has world heritage-listed cuisine; Japanese people, it seems, are always  thinking about food.  So perhaps it is little wonder that “food tours” have become popular with visitors to Japan.

Even though I am not a “foodie”, when a friend invited me to join the Arigato Japan Food Tours “Flavors of Japan” tour, I couldn’t resist giving it a try.  I’m glad I did!  The tour was fun, and informative.  There is so much to know about the food of Japan that I finished the tour feeling better informed yet hungering for more.

This particular walking tour commenced near the famed Nihonbashi bridge, once the site of old Edo’s most vibrant marketplace.  As Yoshi, one of the tour’s guides explained, it was this marketplace that led to the Nihonbashi area becoming known as the “kitchen of Edo”.  And this, it seems, was the theme of our tour.

The tour began with a stop at a dashi (broth) shop with over 200 years of history.  Dashi is at the heart of many Japanese dishes, so this was a great place to begin our food-ucation.

As Yoshi showed us the dried bonito and kelp that are two of the most important ingredients of dashi, the eighth-generation proprietor prepared small sampling cups for us and further explained the subtle differences of the shop’s proprietary broth varieties.  In a nod to modern times, in addition to the traditional dashi varieties, they now produce a vegan version.  Helpful to know. 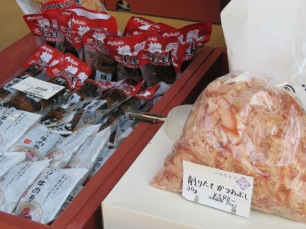 Next we dropped by an “antenna shop”.  Run by regions, prefectures, or even municipalities, these shops exist for the purpose of generating interest among people in the capital (including foreign tourists) who might not otherwise be aware of or interested in these far-flung places.  The shops sell fresh produce and other local specialties and provide tourist information.  There are more than 60 such shops scattered across Tokyo, although the bulk of them appear to be in the Shimbashi-Ginza-Nihonbashi neighborhoods.

This tour actually included two antenna shops, one representing Nara and the other Kanazawa.  The high quality of the fresh produce for sale, as well as the various other products on offer, was very impressive.

Although the tour ventured a little into the narrow side streets of this area, we soon found ourselves in Coredo Muromachi, a large, modern shop/restaurant complex–arguably the 21st century iteration of Edo’s old marketplace.  Indeed, we were told the name Coredo was a portmanteau of “core” and “Edo”, reflecting Nihonbashi’s history as the “core of Edo”.  Apparently there are at least three Coredo buildings in the Nihonbashi neighborhood.

Literally just inside Coredo was a shop specializing in Japanese omelet, known as tamago yaki.  We learned that dashi, such as we had tasted earlier, is a key ingredient in the slightly sweet egg concoction.  Even though it was nearly time for lunch, we each got a serving of tamago yaki on a stick to try.  Tamago yaki features in a lot of Japanese dishes, finding its way atop sushi rice and into bento boxes.  But on a wooden stick, steaming fresh off the grill could become my new comfort food. 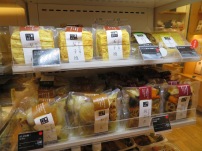 Even though we had been fed samples (or more) at nearly every stop we’d made, putting a bit of a damper on our appetites, our next stop was lunch at a Kyoto-style restaurant on one of Coredo’s upper floors.  I thought that was an interesting choice, given the area we were touring.  Looking back, I begin to wonder if Kyoto cuisine is thought to preserve more of the cooking styles of the Edo period. 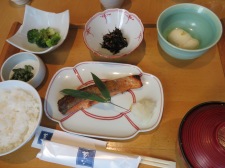 After relaxing over our meal and discussing the finer points of Japanese dining etiquette–including such matters as what to do with chopsticks when you want to put them down and whether it’s okay to pick up one’s rice or soup bowls–, we were back on our feet continuing the tour.

Any resident or visitor to Japan knows that the basements of department stores or major retail outlets contain grocery stores as well as various other outlets for pre-made food, both sweet and savory, sometimes made to order for the consumer to take home and incorporate into a meal there.  In a particularly labyrinthine section of the basement of Coredo, we found a stall specializing in fish paste.  Although that may sound obscure, fish paste products feature significantly at the Japanese table.  They could be thought of as the equivalent of hot dogs or cold cuts in Western cuisine, although the gourmet varieties at the stall we visited belie that analogy.  There’s even one that’s a bit like a Scotch egg.

We also dropped by a stall that made pressed sushi topped with anago (eel caught in the ocean–as compared to unagi, which is eel caught in fresh water). 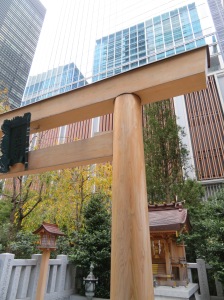 Finally we left the Coredo complex and wandered into the small park next door.  While this was a modern landscaped greenspace that felt like it had been renovated as part of the Coredo development, the park was well-used by area office workers to get a bit of fresh air during their lunch hour.  It also contained two small historical shrines.  Since the gods of shrines are often very attached to the land on which the shrine sits, it makes sense that the park would be designed around the shrines, permitting them to continue their role as guardians of the neighborhood.

After a bit of a walk through Nihonbashi’s side streets, we came to one of the most famous fruit shops in Tokyo.  (You may have noticed that I have not given shop names–this is deliberate to protect the tour’s proprietary information. Many names are easily discernible in any event.)  There Yoshi explained in detail how super sweet, perfectly round melons are grown in Japan, making it instantly obvious why those melons are so unbelievably expensive.  Most of the fruit in the shop was “perfect” and priced accordingly.  No free samples available here!  Just looking at the price tags was a cultural experience!  It was a minute or two after leaving the shop before my heart rate returned to normal.

Next we got to experience wagashi (Japanese sweets).  By this point in the tour, it’s definitely time for a dessert-like treat.  At this shop, patrons choose from one of half a dozen types of wagashi–in seasonal designs–and the chef produces it right before your eyes.  Our guy said he made about 100 such treats a day.  The key ingredients of wagashi are usually bean paste (comes in red and white varieties) and sugar.  Some of the white bean pastes are dyed other colors.  They are then handcrafted into particular shapes–I chose a camellia flower–and served with a bowl of freshly whipped green tea.  Such a pleasant little break! 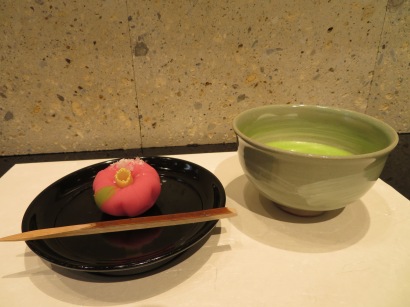 Our final stop of the day was a tea shop not far from the Mitsukoshi-mae subway wickets.  The shop was started by a Frenchman who realized that Japanese tea was underappreciated and set out to do something about it.  He explained to us how to brew a proper cup of green tea and demonstrated different kinds of tea leaves and what kind of tea they produced.  He also introduced us to a number of his flavor-infused tea varieties (cola, raspberry, or mocha-flavored tea anyone?).  He was ebullient in his enthusiasm and generous with his time and knowledge. 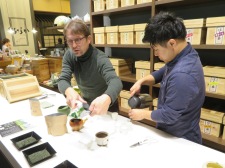 Our little walking tour took us from the most basic key ingredients of Japanese cuisine through to a full meal, a sweet and tea.  I learned so much.  I especially learned that there is still much I have to learn about Japanese food.  A food tour, with an expert on hand to provide explanations, is definitely a good way to make a start on learning just what makes Japanese food so special.  It is an experience one can savor!

For more information on Arigato Japan Food Tours, check out their website.  Special thanks to my friend Lauren for inviting me to join this tour.