Semi-tropical Okinawa is famously the first place cherry blossoms are seen in Japan every year.  And they’re blooming now! 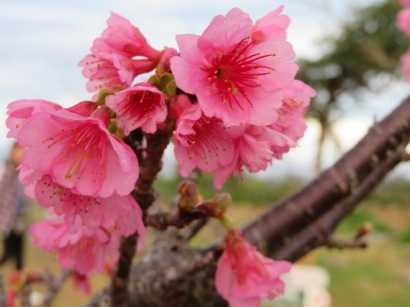 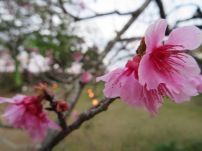 One of the most popular cherry blossom viewing spots on Okinawa’s main island is Nakijin Castle Ruins.  The ruins are on the Motobu Peninsula in the northern part of the island.

There has been a stone fortress on this hilltop facing the East China Sea since at least the 12th century.  The massive stone walls now remaining–about 1.5 kilometers of them–were built between the 13th and 15th centuries, when Okinawa was three separate “kingdoms”. 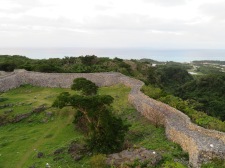 Nakijin was the capital of the northernmost of those early kingdoms, which effectively controlled the northern half of the island until the three kingdoms were unified into a single Kingdom of the Ryukyus at the beginning of the 15th century.  Thereafter the castle was an administrative center until its buildings were destroyed by Satsuma invaders from the Japanese mainland in 1609.

Now part of the UNESCO World Heritage listing “Gusuku Sites and Related Properties of the Kingdom of Ryukyu” that includes nine different sites across the island, the Nakijin ruins are an extensive series of heavy limestone walls setting off the entire castle area and various enclosures within.  (The word “gusuku” refers to Okinawan style stone fortresses.)

Always popular and fun to poke around in, this time of year–when the entire central approach to the castle’s innermost sections is awash the dark pink blooms of Prunus pendula or bellflower cherry–is arguably the best time to visit Nakijin.

From January 26 to February 11, 2019, the site is remaining open to visitors through 21:00 and is illuminated from 18:00 until closing, to further enhance the hanami opportunity.  Outside of this special Cherry Blossom Festival, the castle site is open from 9:00 am to 5:00 pm. 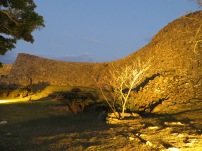 The illuminations include torchlight and colored lights, making the area even more visually interesting. 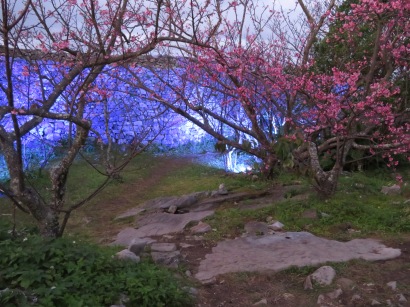 The innermost sections of the castle that are open to the public are basically at the highest point of the castle grounds, with beautiful views of the East China Sea.  Here and there are displays explaining where various buildings used to stand and how they were used.  Areas of particular religious significance are also noted and explained.

There is a visitor center/ticket office (JPY400) near the parking area, below the castle precincts.  Local snacks and souvenirs are also available here.