The valleys and mountains north of Mt. Fuji are full of remnants of the lives of some of Japan’s earliest inhabitants–the Jomon hunters and gatherers of Japan’s pre-agricultural period (traditionally dated between 14,000 and 300 BCE).  But archaeologists have had to dig for it. 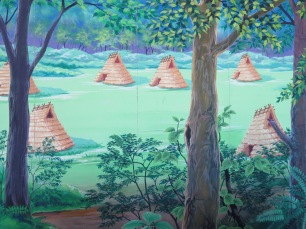 Archaeology has only been undertaken in Japan for about 150 years, a relatively short period.  (Look here for a bit more on that history.) Yet archaeologists have been able to use the extensive artifacts unearthed to form credible theories about the lives of the pre-historic inhabitants of these islands.

Both Nagano and Yamanashi Prefectures have a number of excellent museum exhibits of Jomon artifacts and intriguing reconstructed sites that help the merely curious to understand more as well.

For travellers by car on the Chuo Expressway, there is even a Yamanashi museum easily accessible  from a rest area about 100 km. west of Shinjuku that can help introduce Jomon history.  The Shakado Museum of Jomon Culture, just a short climb up purpose-built stairs from the “Shakado PA”, makes it possible to dip into the Jomon world while on the way to explore some of the other sights of Yamanashi or Nagano (or when stuck in traffic bound for Tokyo at the end of a long week-end).

It may sound odd to have a museum accessible from an expressway rest area, but there is a story behind it.  During the construction of the Chuo Expressway in the late 1970s/early 1980s, planners realized the expressway would run through the Shakado area (named for a local temple) known to contain historical ruins.  When the road builders started digging the road bed, the ruins were found to be quite extensive, with layers of important artifacts dating from 1,000 years ago to 20,000 years ago.  It was decided to halt the road construction while the entire area was thoroughly excavated.

To complete the excavation as quickly as possible, an army of diggers–more than 20,000 people–were employed, including professional archaeologists, local farmers and their families, university students, and anyone willing to help out.  The dig lasted from February 1980 to November 1981. Only after the excavation was completed was the expressway construction continued.

The dig revealed foundations of structures and dwellings, some on top of each other, indicating different periods of habitation.  In the Jomon layers, diggers found 255 pit dwellings as well as burial sites, pottery shards, clay effigies known as dogu, more than 10,000 stone tools, and a number of other artifacts.  Many of these are still being catalogued and pieced together decades later, so extensive were the artifacts recovered.  More than 5,000 are on display or being studied or restored at the Shakado museum.

Jomon extends over a long period of time that archaeologists have begun to divide into sub-periods based on the sophistication of the clay pots found.  To some degree that can be seen in the chart below–note the number of years ago on the left; longest ago on the top.  It is believed Jomon people began to make clay pots from about 12,000 years ago, which the elaborate “rope mark” decorations from which the name Jomon derives, appear not to have begun until about 5,000 years ago. 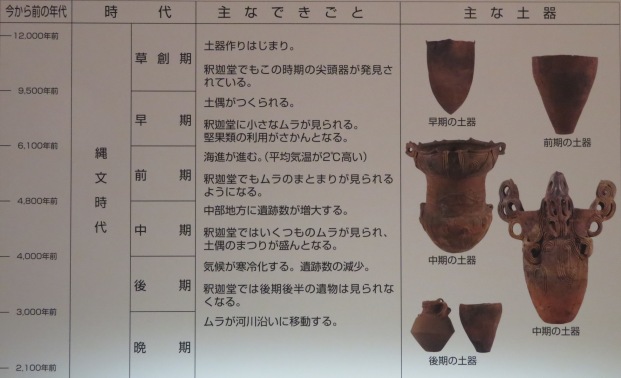 The Shakado museum collection includes pots reconstructed from shards from across a broad spectrum of the expansive Jomon period.  The museum’s curator likens the restoration of the pots to working on giant jigsaw puzzles.  Some took as long as a year to piece together. 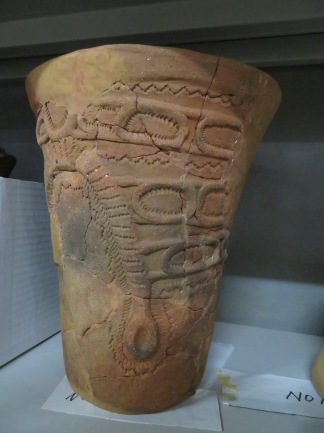 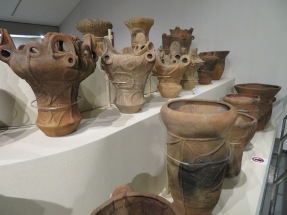 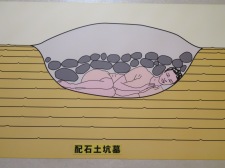 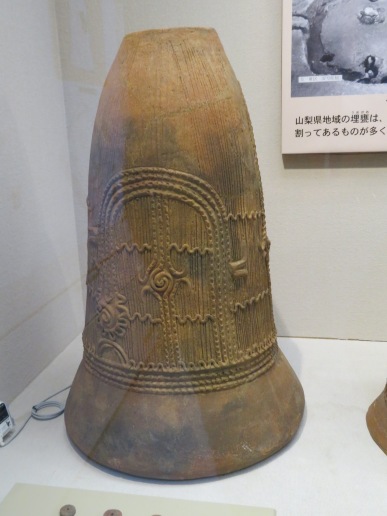 Evidence of hearths and ash in the remnants of pit dwellings, as well as other stone tools unearthed have allowed archaeologists to work out various aspects of the life of the period.  It seems chestnuts and other nuts figured heavily in the diet. 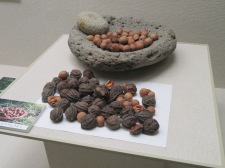 There is even a life-sized reconstruction of a Jomon family at work.  The “father” appears to be chipping obsidian, a glass-like volcanic stone that was used by Jomon people to make knives, axes and arrowheads, while the “mother” shapes clay into a pot. 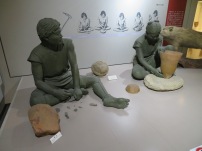 The real treasures of this museum are the dogu.  Dogu are small clay figurines in the shapes of humans and animals, usually only several centimeters or a few inches tall. 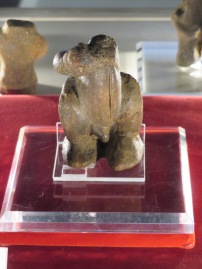 Although about 15,000 dogu have been excavated across Japan, they are predominately in eastern Japan and the Shakado site has been one of the most prolific; 1,116 dogu were found here.  I was fortunate that during my recent visit there was a special exhibition containing the entire collection.

Dogu are nearly always found broken in two.  It is believed they were deliberately broken and then buried inside the owner’s pit dwelling.

The animal shaped dogu are, predictably, the creatures most encountered by Jomon people: wild boar, frogs, and snakes.  Most of the human figurines are female, and one theory is that they are somehow associated with fertility, perhaps serving as amulets for a safe pregnancy.  Many of the female dogu have swelled bellies.

Another theory related to dogu is that they are effigies created to absorb illness or evil; perhaps they were broken to “break” the evil.  Some of the museum’s dogu have been reconstructed and displayed whole, while in other cases, only one half has been recovered. 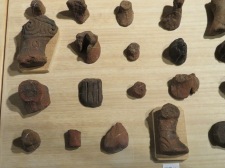 While the purpose of these whimsical figurines will likely remain a mystery, the variety of faces and figures, and in some cases the sophistication of the portrayals, of these dogu are truly fascinating.

To further whet your curiosity about the digs undertaken at Shakado, there are three replicas of pit dwelling excavations on the grounds of museum as well, showing the perimeter of the pits as well as indentations where the pillars supporting the thatched roof stood.

Of course, the museum is also accessible by ordinary road, if you’re otherwise in the area–there are a number of orchards and wineries nearby–and want to drop in.