There are times when you feel like a bit of a walk, but you don’t have much time.  Or maybe the weather isn’t cooperating–too cold or too hot for any kind of prolonged expedition.  But still you want to get some fresh air and do something other than wander through shops.

Tokyo offers lots of opportunities for short suburban explorations that give you a bit of history, a bit of nature, and a bit of culture.  This is such a walk.  In just a couple of hours, you’ll be able to see something of Japan’s stone age history, a spot associated with samurai warriors of the middle ages, a number of Edo Period sites, a history museum that helps tie it all together, and a few historical shrines and temples.  At the end of this short walk (about 2.5 kilometers) is a nice hot bath and refreshments, too.

Begin at JR Omori Station, just two stops from Shinagawa on the Keihin Tohoku Line.  It’s important that you use the North Exit (toward the back of the train if you’re coming from Shinagawa), but take a moment on the platform when you get off the train.  Between the stairs for the Central and North exits you’ll find a monument to E.S. Morse, the American zoologist credited with introducing field of archaeology to Japan.  The monument is a replica Jomon Period (14,000 BC to 300 BC) pot, commemorating the kind of artifacts Morse unearthed not far from the site of this station.

After exiting the wickets at the North Exit, turn left and take the stairs up to street level.  Just at the top of the stairs on the right, you’ll find a drawing of a gnarly pine tree.  This is a copy of Hiroshige’s rendition of a famous tree that once stood here.  There is a legend that the 11th century nobleman, Minamoto Yoriie, once stopped to rest on this hill and hung his samurai helmet on the branches of the tree, rather than place it on the ground. During the Edo Period, the hill was known as Hakkei-zaka (the hill of eight views) in the village of Arai-juku, and was a popular leisure area.

The street in front of you is Ikegami-dori, historically the principal road leading from Edo to Ikegami Hommonji, a primary center of Lotus Sect Buddhism which is about a kilometer down the road to your left.  For this walk, though, turn right.  Cross Ikegami-dori just after the light and continue along Ikegami-dori a couple dozen meters to Hie Shrine.  While now just a small, local shrine, in the days when this was the village of Arai-juku, this spot was the pleasure garden of the local village head.  In addition to the main shrine, the grounds also contain a kagura-den (dance stage) and two small Inari shrines. 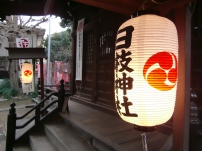 Since 1677, Hie Shrine has been affiliated with nearby Ennoji, a temple established in 1571. 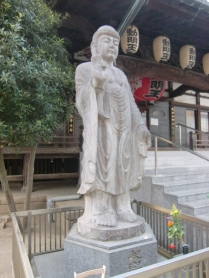 Returning to Ikegami-dori, walk another 200 meters and on the opposite side of the road you will find the entrance to Omori Shell Mound Park.  This park commemorates the work of Edward Sylvester Morse.

In 1877, as Morse rode the train from Yokohama to Tokyo, having just arrived in Yokohama by ship to teach at the Tokyo Imperial University, he noticed a strata of shells in the hillside being dug away by coolies alongside the tracks.  Morse’s trained eye recognized a midden, or shell mound (a/k/a prehistoric garbage heap), which he subsequently confirmed when he returned to the site by horseback with some of his students.

Morse and his students undertook Japan’s first archaeological dig, a Jomon period seaside village on this location. In that period, at least 10,000 years ago, the shoreline was approximately where the train tracks are today.  Morse’s characterization of the markings on pottery shards he uncovered as “cord-marked”, led to the Japanese name for the historical period:  Jomon (literally “rope mark”).  Morse, who authored several books on Japan based on his experiences, is widely credited with introducing the science of archaeology to Japan. 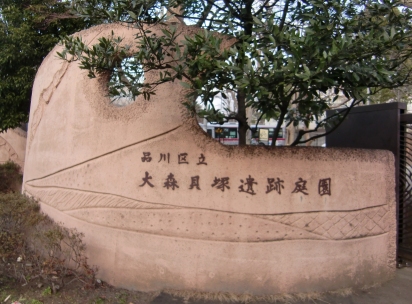 The park contains displays of the former coastline and the lifestyle of the people of the period.  Toward the back of the park on the right hand side, under a white shell-shaped roof, is a dug out pit where you can see the ancient shell refuse.  As you stand at the back of the park, overlooking the train tracks and endless buildings with no shoreline in sight, it’s difficult to imagine that this spot was once the seashore.

Another 250 meters along Ikegami-dori is Kashima-jinja, a shrine with over a thousand years of history, although the current buildings were built less than a hundred years ago.  During the Edo Period, this shrine was one of the three great shrines of suburban Edo commonly associated with Sumo wrestling.  At the same time, it was, and remains, a popular site to pray for safe travels.  The expansive grounds contain a number of smaller shrines, as well as a dance stage.

Continuing on Ikegami-dori, just after the traffic light is the Shinagawa Historical Museum.  Open from 9 am to 5 pm Tuesday through Sunday (admission JPY100), this compact museum houses a fine collection of artifacts on the history of the area from the Jomon Period shell mounds through to the Edo Period, when Shinagawa was a post town on the Tokaido Road, just a bit to the east of Ikegami-dori.

There is also a display on the Shinagawa Aquaduct, which brought in fresh water during a time when the area’s economy was focused on vegetable production.  Another major industry of the area was the production of nori (laver) and the museum has a display of the tools necessary for this endeavor.  It also has a very fine diorama of the Shinagawa post town as the Tokaido Road passes through it.

Take note of the patterns on the floor of the museum’s lobby.  These delineate the locations and shapes of the foundations of three of the several 4th century dwelling remains found on this site when it was excavated to build the museum in the 1980s.  In the garden is the foundation of another of these dwellings, which can be more closely examined.  It seems entirely likely that this area has been continuously occupied by humans since the Jomon Period.

Also in the garden is the reconstruction of a 1920s tea house that was originally built here.  From time to time, tea ceremony is actually conducted here.   The friendly museum staff are happy to provide an English pamphlet that contains explanations of the exhibits.

Leaving the museum, take the first right (just next to the museum) and walk down this lane to where it tees onto another laneway.  Turn left and ahead you will see between two houses a temple bell tower.  To reach this temple, you need to turn right, then left right away.  This is Kofukuji, a temple with at least 600 years of history.  Curiously, the ginkgo tree fronting the temple, at 800, is older than the temple itself.

This quiet temple grounds/cemetery has lots to explore, but perhaps its principal claim to fame is the “big well” from which Oimachi (literal translation, “big well town”) takes its name.  You will find it under a tree in the cemetery on the hill behind the temple building itself.  It is said to have been in use since the 13th century. 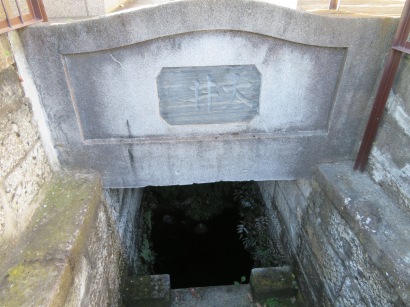 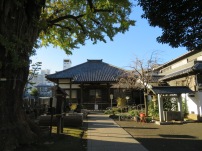 After leaving Kofukuji, turn left and continue on this narrow residential street, crossing an arterial, for about 300 meters to Seikoji, another historical temple.  Both of these temples date to days when the shoreline was much closer and were situated to face the water with a hill behind.  According to a map at the Shell Mound Park, there is another Jomon Period shell mound in this area, although I have not met anyone in the neighborhood who can tell me where it is.  Rather, I was told, “In this area, all you have to do is dig and you will find old shell refuse.”  Instead of digging, spend a few minutes wandering in the serenity of this pretty temple ground.

Shortly after leaving Kofukuji continuing on the same narrow street, turn left where the train tracks come into sight.  Follow this road up the hill, taking the right fork just after the road bends left.  Toward the top of the hill you will encounter Sakumori Inari Shrine, an old shrine dedicated to the god of the harvest, an indication that this was once a farming area. 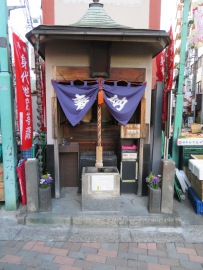 Take the road running along the high side of the shrine, which will lead you back to Ikegami-dori.  Cross and turn right.  At the “Mitsumata” traffic light, cross.  Ahead on the right you will see a small shrine housing the Mitsumata Jizo, a guardian of travellers for many centuries.  Keeping the Jizo on your right, follow the road down the slope for about 250 meters.  At the bottom of the hill, turn right.  Ahead of you is JR Oimachi Station.  On your right, you will find an escalator entering the Hankyu Oimachi Garden Building.  Go up two levels to reach the entrance to Ofuro no O-sama. 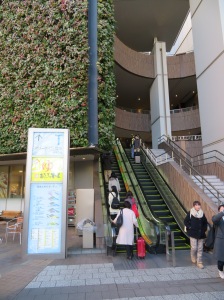 Ofuro no O-sama means “the king of baths”, and indeed it is.  In addition to the six different types of indoor baths, three outdoor baths and two saunas in both the men’s and women’s facilities, you can also purchase separately several types of massage as well as manicures, facials, and even haircuts.  There is also a restaurant and a tanning salon (for men only, believe it or not).

For the entry fee (JPY1,250 on weekdays/JPY1,550 on week-ends and holidays—Note: it can get a little crowded on Saturday evenings) you get a towel and pajamas and unlimited entry to the baths for the rest of the day.  You can even leave the premises and return again.  But the premises contain so many opportunities to pamper yourself that you might never want to leave.

You are given a wrist band when you check in and pay the entry fee, with an electronic toggle that tracks any purchases you make so that you can simply pay for them as you leave, feeling relaxed and refreshed.  JR Oimachi Station is just a few steps away and today’s suburban exploration is completed.

3 thoughts on “Omori to Oimachi: an historical suburban exploration”