Autumn was a bit late to reach Japan this year, but is now in full “bloom”–awash with beautiful autumnal hues as the leaves of deciduous trees change and eventually fall. There are plenty of places to go in search of those stunning autumn leaves, especially gardens, parks and major avenues.

If you’re interested in getting a bit off the beaten track in an historic Tokyo suburb in search of autumn colors, give this little walk a try (see map at bottom).

Start from JR Omori Station on the Keihin Tohoku line.  A century ago, this neighborhood was transitioning from agrarian to suburban, thanks to its proximity to the center of Tokyo.  Many homeowners supplemented their income by renting out their spare rooms.  Many writers found the cheap accommodation and the bucolic setting conducive to their craft.  Some settled more permanently in the neighborhood.

Just outside the Omori Central West Exit is a large signboard with a map showing where various of Japan’s literati of the early 20th century lived and worked.

Few of these writers are known in the West, since their work has never been translated.  But there are some names that even people who don’t read Japanese might recognize, such as 1968 Nobel Prize winner Yasunari Kawabata.

This walk doesn’t go so far as Kawabata’s former digs, but takes in the former homes of a writer who was a close friend of Kawabata’s and a publisher accused of war crimes.

Cross the street and ascend the wide stairs climbing the hill.  Skip the narrow staircase leading to the shrine and instead take the wider, more modern staircase alongside restaurants and other commercial establishments.  Opposite this is a wall featuring several bas reliefs of a number of these well known writers, including some of the characters you’ll soon be meeting.  Enjoy them as you climb. 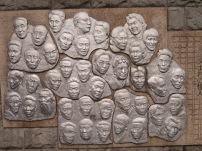 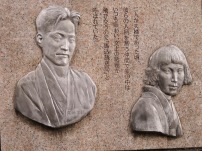 As you walk across the top of the hill, you’ll skirt around the Omori Tennis Club, founded in 1882, more evidence of this neighborhood’s suburban transition.

When you reach the bottom of the hill, the major road is known as “German-dori” because it was the main road leading from Omori Station (now to your right) to the German School that used to be located not far away (it moved to Yokohama in the 1980s).  It is a wide thoroughfare connecting Kannana Dori to your left with Ikegami Dori to your right.  Bomb damage to this neighborhood during World War II made it possible to push through this convenient connecting road.  The narrow roads winding on and off German-dori make it possible to imagine the shape of this before the war bombing.

Cross German-dori at the light and follow the narrow road to the left, running parallel to German-dori as it climbs (this area was once known as the 99 hills) and takes a little dogleg  to reach the former home of Shiro Ozaki (1898-1964), a writer and actor best known for his 1934 novel “The Theater of Life”.  He and feminist writer Chiyo Uno were lovers for a time, although it does not appear they lived together in this house.  Ozaki and Kawabata–who lived about a kilometer to the south–were such good friends that Kawabata eulogized Ozaki at his funeral.  The house is preserved as a museum, with various displays of Ozaki’s possessions visible through the windows. 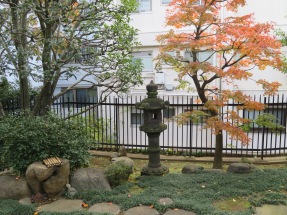 Just a few dozen meters beyond Ozaki’s house is the entrance to Soho Park, with its beautiful gardens and a small museum of relics relating to Soho Tokutomi (born Iichiro Tokutomi, 1863-1957), a journalist, publisher, history writer, and literary critic.  Tokutomi built a house here in 1924, and lived in it with his family until 1943, when he moved to Atami to escape the Tokyo bombings.  The house once stood on the site of the museum (part of the house is preserved inside) and the gardens once extended all the way down the hill to German-dori. 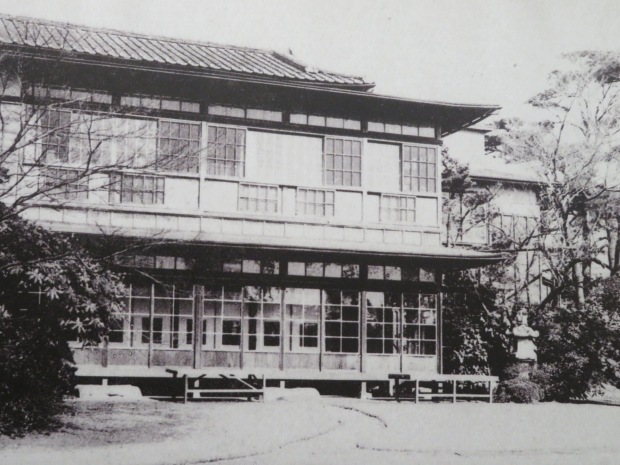 Tokutomi began his career by founding a newspaper in the city of Kumamoto in the 1880s. A few years later he relocated to Tokyo and expanded his publishing efforts, initially with a general news magazine, and later newspapers, political commentaries and magazines on family life. Between 1918 and 1952 he also compiled the 100 volume “A History of Early Modern Japan”. He was awarded the Order of Culture by the Japanese government in 1943 for his endeavors.

Apparently Tokutomi was fairly left leaning at the beginning of his career, although his views had moved to the right by the late 1890s. By the turn of the century, his newspaper, “Kokumin Shimbun”, had effectively become a government instrument.

During World War II, Tokutomi was identified by the Allies as a dangerous influence in Japanese public life.  After the war he was arrested as a Class A war criminal and detained from December 1945 to August 1947. Due to his advanced age, he was never tried, although he was barred from publishing and effectively under house arrest at his  home in Atami for the rest of his life. 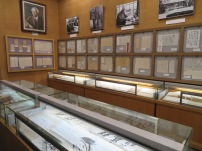 Much of this history is told by the articles on display in the museum. For visitors who don’t read Japanese, among the most interesting items are pieces of his correspondence with various people from around the world which are on display in cases against the back wall.

This time of year, the garden is possibly more rewarding than the museum.  It features plenty of Japanese maples, with their brilliant flaming red. 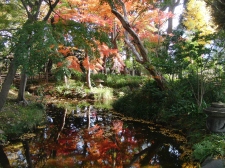 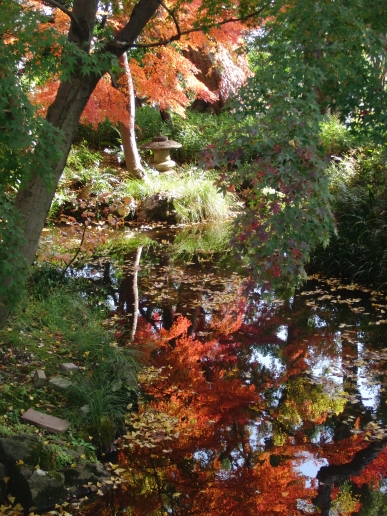 Zelkova, Crepe Myrtle, Ginkgo and others chip in with yellows and browns. 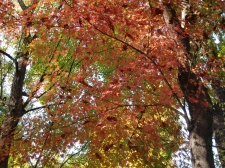 Water is pumped from a well into a small channel that feeds the pond–a central focal point of the garden. 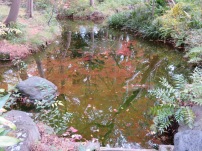 The east end of the garden, near where you entered, has a small grove of plum trees (exquisite in February!). The highest point in the garden is a hillock that is actually a kofun burial mound believed to date from the end of the Heian Period (794-1185).

There are three entrances to Soho Park, which closes at 4:30 pm.  The original entrance to the property is actually on the west end, a massive stone staircase down the hill to the street below.  Tokyo’s addressing system was changed after World War II and the old address is carved into one of the stone gateposts.

Once you’ve had your fill of the colors, make your way back to German-dori and follow it back to Omori station.  There are a couple of nice patisseries and coffee shops along the way where you can take a little break.

Or, if you have the time and energy, continue enjoying autumn leaves by taking this walk from Omori station.