The city of Matsumoto sits almost exactly in the center of the island of Honshu, in the middle of the Japanese Alps. It is a castle town that, thanks to its central location, has long been a political and cultural center. Thanks to its central location, these days many people pass through Matsumoto in winter on their way to such popular ski fields as Hakuba.  If you’re passing through, it’s well worth it to stop and look around for a bit.

After the Meiji Restoration, Matsumoto was an early adapter of some of the newly imported modern technologies and became a regional hub for silk production.  For a time in the 1870s it was a prefectural capital.  Although it has lost that political sway, Matsumoto is still a significant regional city and one that is justifiably proud of his history.

On the western outskirts of the city is the Matsumoto City Open-Air Architectural Museum (sometimes referred to as the Matsumoto City Historic Village), where buildings relating to Matsumoto’s role in Japan’s early modern history have been preserved in a pretty little park.

The first building visitors notice is the Former Nagano District Court Matsumoto Branch building, built in 1908 inside the grounds of Matsumoto Castle and moved to this site in 1982 as the result of a community preservation effort.  Sitting behind a brick and iron grate-style fence, also of that period, it is the only building of its kind left in Japan. 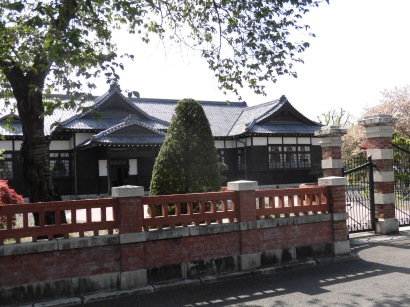 The building was built to house the court’s administrative offices as well as courtrooms. In one of the entrance halls are displays on the various punishment and torture methods commonly used up to the end of the 19th century.  They most definitely would have had a deterrent effect!

The layout of courtrooms of that period is particularly interesting.

Japan has never really used a jury system, so there is no jury box.  But even more curious is the fact that in the largest courtroom, containing mannequins in the judicial robes of the day to demonstrate the different players in the earliest modern justice system, the procurator (earliest version of a prosecutor) and the court reporter were both seated at the same level as the judge, while on the defendant and defendant’s counsel were seated at the lower level.  It almost feels like the deck is stacked against the defendant from the outset.  There is an on-demand announcement system with explanations. 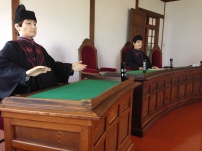 While the criminal justice system has since been reformed and the prosecutor and defense counsel now sit facing each other on the lower level, even today it sometimes feels like judges work in league with prosecutors.

Behind the court building sits the former Matsumoto Juvenile Corrective Institution.  This is a more modern building, constructed in 1953 and in use until 1990.  It was designed as a solitary confinement facility, so each cell, roughly three tatami mats in size (approx. 180 cm. x 270 cm.), held just one youth. 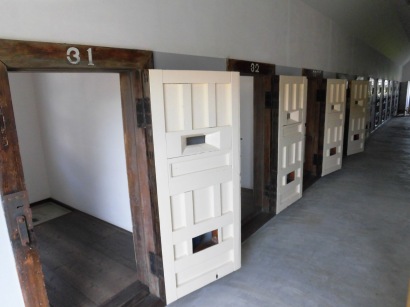 Each cell has a squat toilet in one corner.  Apparently when the building was first opened, the cells had hardwood floors on which prisoners spread a straw mat and their bedding.  Following a renovation in the early 1970s, cell floors were covered with tatami mats and hinged doors covered the squat toilet when not in use.  Sinks were also adding to improve conditions.  It’s still a rather bleak facility.  Apparently, modern detention cells are similarly designed.

Behind these buildings is a small silk factory moved here from the town of Shimosuwa, to the south.  Inside are some of the vintage machines used to extract silk thread from coccoons and process it onto spools to ready it for weaving into fabric.

An exhibition hall contains various artifacts of life in this region in the late 19th and early 20th century as well as exhibits on some of the leading lights of Matsumoto during this early modern period.

Next door to the exhibition hall is Horai-ya, a building that served as dormitory for the young women who came in off the land to work in the silk factories of Suwa and Akaya.  Horai-ya was originally built as an inn in the middle of the 19th century.  Among the interesting features of the building itself is its relative flat cedar shingled roof, with the shingles held in place by large stones.  The inside of the inn feels rather cold and dark.  Yet, one can imagine a group of young women from the countryside living here, sharing meals and chatting about their work and their dreams. 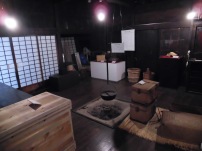 There is one last building of roughly the same vintage as Horai-ya, a small private residence that was once the home of a low-ranking samurai named Kinoshita.  His son, Kinoshita Naoe (1869-1937) was born in this house.  Kinoshita was definitely a child of the Meiji Restoration.  He grew up to become a Christian Socialist activist for women’s rights and social justice.  He was one of the activists who was outspoken about the Ashio Copper Mine environmental pollution of the turn of the century and played a role in getting prostitution outlawed in Japan.  Kinoshita worked as a lawyer and a journalist.  He also tried his hand at writing novels, some of which were banned by the government for their “subversive” content.

Alas, little of this history is obvious from the house, which instead contains a collection of old looms, in keeping with the silk history of this region, and some displays on 19th century home life. 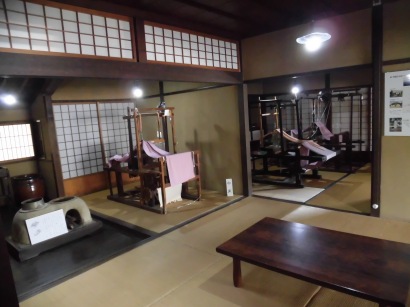 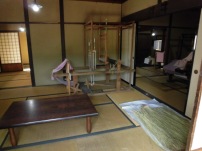 Just next door to the Open-Air Architectural Museum is the Japan Ukiyo-e Museum, a very modern concrete and glass building housing an extensive collection of Ukiyo-e woodblock prints.  Other major sights to explore in Matsumoto include its beautiful flatland castle and, nearby, the Kaicho Elementary School, built in 1873 and also now converted to a museum.  Perhaps someday I’ll write a bit more about those sightseeing options.