Japan has many great traditional performing arts, some with over a thousand years of history.  Perhaps the best known of these is kabuki, a form of theatre developed “only” about 400 years ago.  The plays involved relate-able stories, elaborate costumes and clever staging, making kabuki immediately popular across all social classes (must to the displeasure of the Tokugawa shogunate, who preferred the classes not to mix).

Today’s kabuki, like Western opera, can be an expensive endeavor, but eminently satisfying to watch.  It remains extremely popular and has received world recognition by being listed as a UNESCO Intangible Cultural Heritage.  Thanks to the introduction of earphone or subtitle explanations in multiple languages (including Japanese, since many plays are so old that the language is obscure and difficult even for native speakers to understand), the stories are very accessible.

Kabuki is so popular that it’s not difficult to find a play being performed somewhere at almost any time.  I’ll include details on how to find a performance at the end of this post.  The play I attended most recently at the National Theatre in Tokyo was “The Strange Tale of Tenjiku Tokube”, written just over 200 years ago.  Alas, photography was strictly prohibited during the performance, so I can only share with you a photo of the striped curtain that signifies to the audience that the play is about to begin or that it is intermission.  (Other photos are from amateur performances I have attended in the past.)

Among kabuki’s distinctive features is the hanamichi, a kind of runway that cuts through the audience seating on the left-hand side of the theater.  This is often used for entrances or exits, to convey a sense of distance and give greater dimensionality to the action. 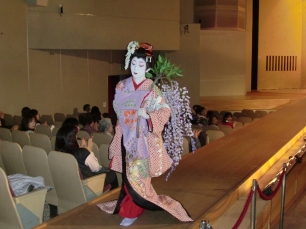 Like traditional Shakespearean theatre, all kabuki performers are male, even those playing female roles.  In its earliest days, both men and women performed kabuki professionally, but women were legally banned from the stage in 1629 on morality grounds.  Although the legal ban was lifted in the late 19th century, the professional theatre still clings to its tradition, with onnagata (men who play women’s roles) regarded as highly specialized performers.

Kabuki staging is very elaborate, with sets that often include house and garden combinations, forests or woodlands, and even ponds.  To connote particular seasons, there may be falling snow, or falling leaves, or cherry blossoms delicately fluttering onto the stage.  If the action takes place in May, wisteria is likely.  A kadomatsu arrangement of bamboo and pine will tell viewers that the story is taking place at New Year’s. 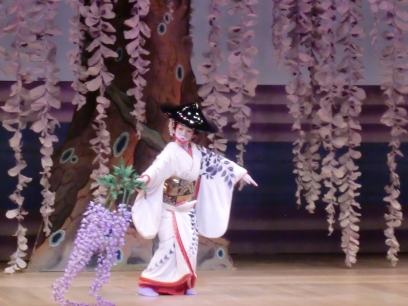 Many sets can be knocked down and removed quickly to facilitate scene changes even as the action is taking place.  Stage hands known as “kuroko”, dressed all in black to render them “invisible” to the audience, are often on stage removing items, supplying items, or facilitating tricky movements.

Since the mid-1700s, kabuki stages have featured a revolving platform that also facilitates scene changes.  Many do not realize that the revolving stage was actually first developed in Japan for kabuki.  Of course, the earliest turntables were manually operated, usually pushed from beneath the stage, while these days the process is mechanized.

Besides the very elaborate costuming of kabuki, certain performers (and certain characters) are known for their quick changes of costume.  Here’s a video from another amateur performance.  The performer entered as an old female merchant.  With the help of the kuroko, “she” is transformed.

Kabuki also often involves elaborate, even athletic moves, so stylized as to be regarded as dance. 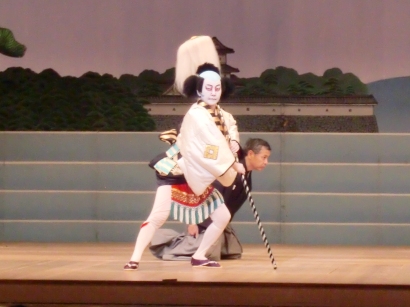 Another particular feature of the kabuki stage is that it often has floor panels that allow the performers to be raised to or lowered from the stage, rather than walking on or off.  This is particularly good for scenes when the magical hero appears or disappears in a puff of smoke, or jumps into the pond to escape pursuit.  There is usually one such panel on the hanamichi and at least one on the stage as well.

Kabuki plays are long, usually three or four acts.  Sometimes the intermissions are also long (largely due to time consuming set changes), so that watching an entire play can take about four hours.  Historically people would make a day of their theater excursion, using the intermissions to enjoy a meal or watch some side performer.  In fact, this is still a practice that can (and should!) be enjoyed.  Most theaters have dining rooms and other seating areas for dining purposes and some arrange for side performers in the lobby during intermission.

At the same time, since many tourists are not willing to invest the time or money in watching an entire performance, many theaters now also sell “single act tickets”.  My one tip would be don’t attend the first act.  It’s usually a slower moving pre-story story.

That was certainly the case with “The Strange Tale of Tenjiku Tokube”.  The first act was quite slow, but the action ramped up in the later acts.

Tenjiku Tokube was a real person, a Japanese sailor who lived in the early 17th century and travelled widely, supposedly as far as India, where he ascended the sacred Ganges River.  Perhaps because Tokubei lived at the time when the Tokugawa government decided to close itself off from the world, the author of this play, Tsuruya Nanboku IV, decided to use his character to entertain his audience with a ripping good yarn while conveying the meta-message that dangerous, evil magic comes from the outside world (doubtless a message the Tokugawa shogun of the day would have endorsed).  Needless to say, the evil magic was ultimately vanquished by the sacrifice of a woman’s love and integrity of things Japanese (in this case, an historic sword) was preserved.

To find a kabuki performance that suits your budget and schedule, check out these sites: