While relaxing in the library of Yusuhara, a fascinating little town nestled in the mountains of Kochi Prefecture, I just happened to notice a poster advertising “Tap Marche”, a campaign featuring six craft beers being served at seven local establishments. What a perfect way to further explore this adorable little town, I think to myself.

I already had plans for dinner that night at the Kumonoue Hotel, but surely I could start my “pub crawl” around the town after dinner.

When a shuttle bus that runs between Kumonoue Hotel and my accommodation at Marche Yusuhara returned me to the center of town after my delicious meal, I am charmed by the fairy lights on the trees lining the road.  The street is very quiet. 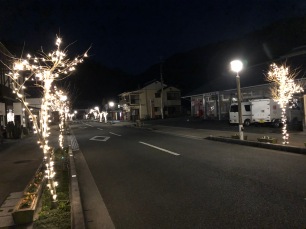 It’s only about 8:30 pm.  But I am in the country and folks retire early.  I decided to try to visit a couple of the pubs shown on the poster.  The first place I try is dark and the next one has a sign on the door saying they’re going to be closed for the next few days (guess I won’t get to try that place!).  At the third, the proprietor is just putting out the “closed” sign as I walk up.  I poke my head into another nearby only to be told they’ve closed already.  I’m only slightly discouraged; after all, I can always try again the next day.

In fact, on the following day, I decide to have lunch at Cafe & Bar Indy’s, an Italian place on the main drag that is one of the participating restaurants.  I enjoy pasta with a pheasant sauce washed down by Hitachino Nest Yuzu Lager, one of two craft beers on tap and have a quick chat with the friendly proprietor, a local who’s been in business for a few years and loves his life. Both the pasta lunch and the Yuzu lager are excellent.

In the evening, I am determined to visit the remaining five participating establishments.  I’ve asked around and been told I should start a bit earlier.  So, at around 6:30, I set out again.  Unfortunately, my first stop (also my first stop the night before) is still dark. Notwithstanding my success at lunch time, I’m again feeling a bit discouraged.  Maybe this idea of mine is doomed to failure.

Fortunately, I am a bit luckier at my next stop, a teppanyaki/okonomiyaki restaurant just down the hill from today’s lunch spot with a name I can’t pronounce (the kanji characters roughly translate to “crazy drunk”).  Well, lucky in the sense that at least it’s open for business.  But in fact, it’s sold out of the craft beers usually on tap, so I have to make do with an “ordinary” Kirin draft beer while I chat with the proprietor as he mixes up okonomiyaki batter and puts it on the griddle.  He fills me in on the owners of each establishment participating in this “Tap Marche” and I learn that another of them, the yakitori shop next door, is closed tonight as well.  Grr. 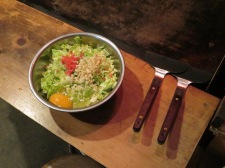 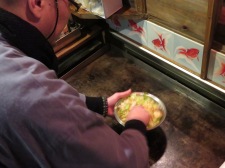 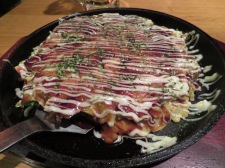 As I enjoy my okonomiyaki and draft beer, I chat with other patrons and hear their stories, too.  Yusuhara is a small town, so everyone seems to know everyone else. It’s all very positive and, as a small town girl myself, a bit nostalgic.

When I’ve finished my meal, I decide to press on.  My chats with others have revealed that there are still two places advertised on the original poster that should be open for me to enjoy.

The first of those is a traditional “snack” called Keimi.  A “snack” is a Western-style bar, albeit usually a very small one, operated by a woman.  Keimi was no exception.  Along one wall it had two small low tables accompanied by low chairs.  A pair of men occupied one of the tables and were deep in conversation.  A large low table in the back corner looked like it could accommodate fairly large group, but on my visit it was just two sisters and their brother.

On the opposite wall from the smaller tables stood a bar, behind which the “mama” ruled.  I sat down on one of the bar stools and ordered a beer.  The man seated beside me soon struck up a conversation.  He turned out to be a truck driver, hauling forested logs from the mountainside to the local timber mill. He was full of stories.

He also had a fine singing voice, as we all soon learned when the karaoke machine was cranked up.  In Japan’s big cities these days karaoke is usually enjoyed by friends in private rooms, rather than broadcast to an entire establishment and shared by all.  But in this little town, things are still done the “old-fashioned” way.  Truth be told, I had forgotten how much fun it can be to sing with strangers, to cheer for them and to be cheered on in my turn.  So much better than a private room!

Eventually I tore myself away.  There’s still one last bar to visit:  Hide Out.  Located next to the pachinko parlor at one end of town, everyone had told me it tended to open in the middle of the day and stay open late. 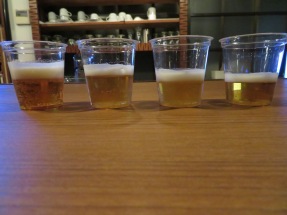 Indeed Hide Out was open, with music blaring and a group of young friends playing darts.  And, truly fortunate for my ambitions to find the advertised craft beer, Hide Out had four of the advertised six craft beers on tap.  I ordered a tasting platter–a chance to try out all four.  I liked two; the other two…not so much.

Hide Out was a particularly interesting bar.  It was larger than the others and apparently doubled as a popular lunch spot.  I could imagine a country band playing in the far corner.

The proprietor was a native of Yokosuka, not far from Tokyo, and had transplanted to Yusuhara four years ago with his wife and three children.  Like everyone else I had spoken to, he loved this town and his life here.  His wife, and especially his children, were happier here, too.

Surprisingly, in spite of spending a few hours on this semi-pub crawl, I didn’t feel particularly inebriated as I strolled back to my hotel past the sparkling trees.  Although I didn’t find as much craft beer as I had hoped for (I can say the Yuzu lager was my favorite), I was happy to have had a fun evening connecting with so many interesting people.